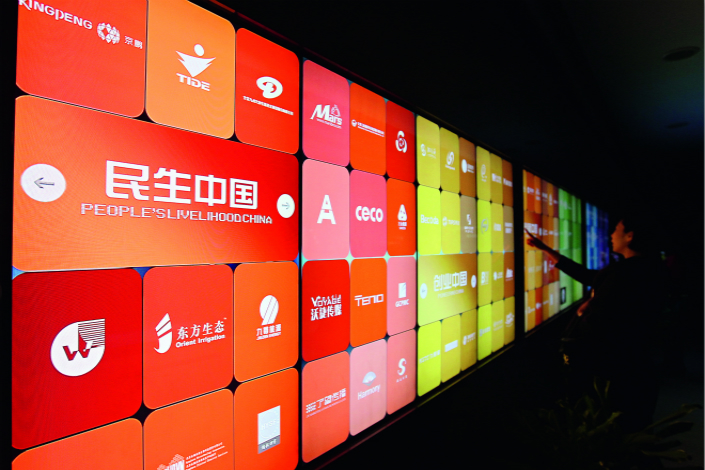 China's New Third Board, once a promising fundraising avenue for the country’s millions of small enterprises, is facing declining new listings while more companies are voluntarily delisting. Above, a view of companies on the New Third Board is seen in Beijing in April 2016. Photo: Visual China

It is going to be a no-party birthday for China’s New Third Board when it turns 5 in January.

The nation’s first over-the-counter stock-trading platform was designed as a preparatory marketplace for small businesses aspiring to be publicly traded companies. A total 11,498 companies have been listed on this platform, including 216 now-delisted ones, according to its operator, the National Equities Exchange and Quotations (NEEQ).

Once a promising fundraising avenue for the country’s millions of small enterprises, the New Third Board has also become a magnet for companies that did not make the cut with stock exchanges due to poor profitability records or substandard corporate governance.

The NEEQ has repeatedly tried ways to screen out mismanaged companies, lure more market-makers to facilitate transactions, and help investors identify investable companies by creating a tiered market structure. However, turnover continues drying up, market-makers are leaving, and new listings are falling while more companies are voluntarily delisting themselves from the board.

“The New Third Board is one of a kind. There is no precedent for us to learn from. The model of the main boards in Shanghai and Shenzhen doesn’t seem to apply here,” NEEQ Chief Supervisor Deng Yingling said.

No longer an alluring platform

In June, 70 new companies were listed on the New Third Board. That number is sharply down from the monthly average of 420 in 2016.

Meanwhile, delistings are at a new high. During the first six months of this year, 160 companies gave up their listing status on the board, up sharply from 56 in all of 2016. Some of them were listed fewer than 100 days, exchange data show.

Meanwhile, as the securities regulator has sped up approving initial public offering (IPO) plans since late 2016, the New Third Board is no longer the most attractive platform for even small companies that seek new funds, said Peng Hai, an analyst at Lianxun Securities Co., which focuses on the OTC market.

“Thanks to a faster IPO approval process, companies of better quality tend to seek a listing on a main board instead” of the New Third Board, Peng said.

The New Third Board has also grown more selective.

Sources told Caixin that since June 2015, the NEEQ has asked underwriters and sponsors to withdraw listing applications from “less qualified” companies. The current threshold is that the company must have net assets of at least 30 million yuan ($4.44 million) and an annual profit of at least 3 million yuan.

A rise in delistings can also be explained by the fact that subdued trading activity may not justify the costs of maintaining a listing status, such as hefty expenses in auditing, legal services and other human resources, said Song Weiming, vice general manager of Zhongtou Lianying Asset Management Co.

Market-makers hold large volume of securities so they have every incentive to facilitate more transactions to boost profits. They are key actors to drum up trading activity. The Nasdaq Stock Market is a prime example of how market-makers help the financial markets run efficiently.

But in China’s New Third Board, things look vastly different.

The NEEQ Market Making Component Index, which measures the value of stocks traded through market-makers, dropped to a record low of 1,036.35 on July 25. The index had hit its record high of 2,673.17 in April 2015.

“I don’t think there’s a floor for the index,” said Deng Jian, head of the New Third Board investment department at Caitong Fund Management Co., adding the index could slip below 1,000 soon.

“Companies with better quality are losing interest in listing on the New Third Board, and this trend will likely continue,” Deng said.

Light trading volume makes it difficult for a seller of a security to ask for a higher price. This resulted in a narrower bid-ask spread — essentially the entire profit of market-makers.

Out of 88 market-makers at the New Third Board, the combined profit for the first half of this year is estimated at 15 million yuan ($2.22 million), said Hao Gang, head of market marking department at Zhongtai Securities Co.

“For OTC market-makers, an annual (combined) profit of 30 million yuan still means losing money,” Hao said. “The model of generating profits from the bid-ask spread is no longer sustainable. Brokers should instead bet on companies’ future growth.”

More OTC-listed companies are setting their sights on migrating to one of the more-liquid stock exchanges, which will further shrink the turnover at the New Third Board.

According to data from the China Securities Regulatory Commission (CSRC), 502 IPO applications are waiting for regulatory review, 133 of which are New Third Board companies. Also, during the first half of this year, 64 OTC companies announced plans to migrate their listing status, up from 37 in the second half of 2016.

The most sought-after destination is ChiNext, a Shenzhen main board often known as the Chinese version of the Nasdaq for startups. But such a route has turned out to be not as easy and straightforward as these companies had thought.

The CSRC repeatedly reiterated that there is no fast track for OTC companies seeking to launch an IPO on a listed exchange. These companies must suspend their trading on the New Third Board before going through the same IPO approval process as non-OTC companies.

“It’s crystal clear that companies chase higher valuation and liquidity,” an investment banker at a major securities brokerage told Caixin. “The key question is to figure out how much exactly they can raise from a listing on the main board.”

If the companies could raise the same amount of money or even more on the New Third Board, listing on other exchanges wouldn't be worth the trouble, the banker said.

Can a ‘select tier’ save the board?

With drumming up liquidity in mind, the NEEQ proposed in March adding a “select tier” on top of the current “base tier” and “innovation tier” to help investors identify the cream of the crop.

Analysts expect 300 to 500 OTC companies to be included in the new top tier based on their corporate-governance practices and financial structures. The NEEQ’s logic is that by singling out the best companies, investors would have an easier time figuring out what to buy, which hopefully would boost liquidity.

“The regulator should set up a timetable or policy direction for both companies and institutions to follow in terms of setting up the select tier,” said Luo Danglun, a professor at Sun Yat-sen University and a co-founder of a think tank that studies the New Third Board.