By April Ma and Yang Ge 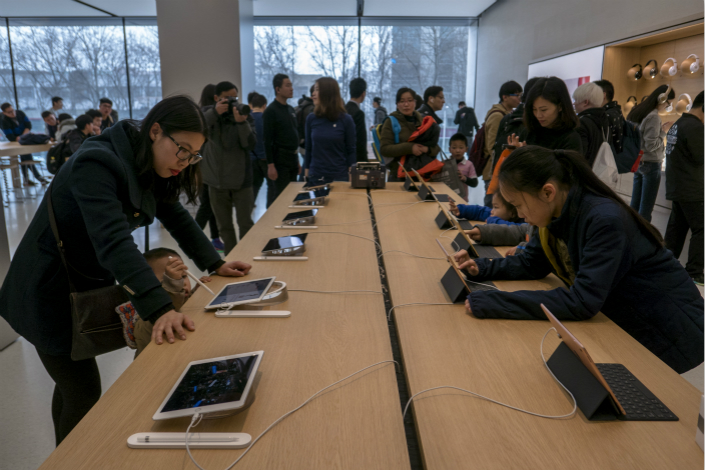 Apple said it was compelled to pull some VPN apps from its app store in China because the VPN operators had not obtained a license that the government recently began requiring. Customers shop at an Apple retail store in Nanjing on March 25. Photo: IC

(Beijing) — Apple users in China will find it harder to access sites blocked here, after the company decided to remove some software from its app store that circumvents such restrictions, in a move that may increase costs and risks of doing business in the world’s largest internet population.

The move by the tech giant comes as a response to Chinese regulators seeking a tightened grip on illicit virtual private networks (VPNs) — which allow web users to surf anonymously and access restricted sites.

About a dozen VPNs — including VyprVPN, Express VPN and many frequently-used local providers such as Tianxing VPN, Shadowrocket, YunVpn, and ChinaVPN – were pulled from Apple’s China app store on Saturday. More than 30 VPN apps remain available, though.

The company said it was compelled to pull the apps because the operators have not obtained a mandatory license, which the government recently began requiring.

This regulation is part of a “rectification campaign” announced in January by China’s Ministry of Industry and Information Technology (MIIT), which requires VPNs to receive prior government approval to operate legitimately. The rule, which authorities said will “clean up” unregulated internet connection providers before the end of March 2018, rendered most these services illegal overnight.

China will not allow the dissemination of harmful, violent or terrorism-related information through the internet, Wen Ku, director of Information Communications Development at MIIT, said at a press briefing last week.

Authorities tried to assuage concerns among expats and foreign businesses shortly after the tightening of restrictions was announced, saying they would not be affected if they turned to officially authorized channels. The new action “won’t have any impact on their general business,” the government said.

Despite the promises, foreign businesses here do not seem placated. “Recent regulatory developments, including limiting VPN use, have created uncertainty for cross-border data communication,” the American Chamber of Commerce said in a written statement on Monday, emphasizing the importance of open communication with affiliates, suppliers and customers to the success of U.S. businesses in China.

Though MIIT argues that VPN service providers would be able to operate as long as they submitted the necessary paperwork as stipulated in the vaguely worded International Communications Passage Guideline, published in 2002, others contend that Apple’s move bodes poorly for businesses, and may be a demonstration of how serious the government is about a “cleanup” in the sector.

“An enforced restriction would echo throughout the entire economy, as everyone is now internet-reliant,” said Brock Silvers, managing director of investment advisory Kaiyuan Capital. He questioned whether China could continue the global integration of its trade sectors and financial markets while simultaneously increasing internet restrictions.

The web-surfing functions for existing users for most of these services have not actually been affected, even though the apps themselves are now harder to come by. Users will still be able to download the iOS apps if they are accessing a different territory’s app store, which is possible if their billing address is located outside China.

But it further tightens an already narrow window of access. Major search engines such as Baidu and popular Android app stores in China have answered the regulator’s call, removing links to VPN products, following the January announcement.

Sites for the popular Express VPN, Vypr VPN, Astrill and Pure VPN have been blocked in China. Most of these companies have opened sites with more discreet domains that can still be reached in the country, though it often takes a VPN to learn about these locations.

As users feel the regulatory pinch, some individuals — such as Zhang, a Beijing-based product manager — have begun to study government guidelines and are thinking of going through approval procedures. Some individuals have even resorted to incorporating a business to receive corporate licensing for undisturbed Internet use.