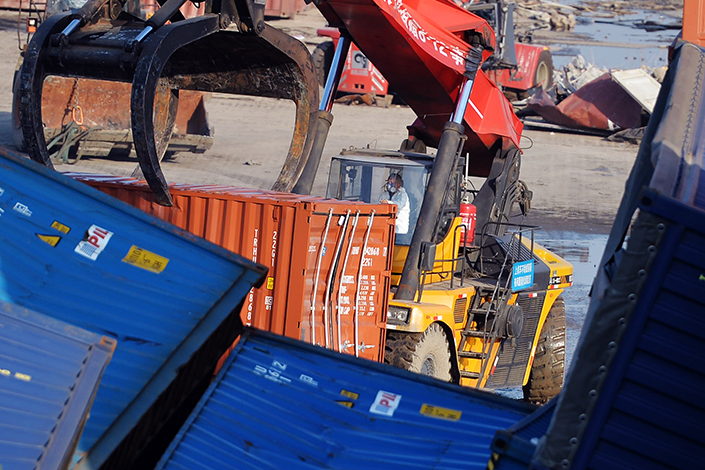 Tianjin city government officials have drawn criticism from the central Chinese government over the worsening of air and water pollution there. Above, containers destroyed in the deadly Port of Tianjin explosions of Aug. 12, 2015, lie in a scrap pile the following month. Photo: Visual China

Tianjin Port is set to resume transporting some kinds of hazardous cargo, including corrosives, on Tuesday, nearly two years after a devastating blast killed 165 people, Caixin has learned.

The largest port in northern China experienced one of the country’s deadliest industrial accidents in decades on Aug. 12, 2015. The initial blast was caused by the self-ignition of hazardous materials in shipping containers at a warehouse, according to a report published last year by the State Council, China’s cabinet.

It wasn’t immediately clear what prompted the Tianjin government to make the change.

Since the explosion, the port has halted operations related to dangerous cargo. The suspension transferred most of the dangerous cargo in north China to the nearby Qingdao Port and other smaller ports.

The suspension increased companies’ transportation costs, because prices for dangerous chemicals soared at nearby ports, said an employee with a cargo agent company in northern China, who is in charge of dangerous goods transportation. He said the government should beef up policies related to the transport of hazardous chemicals.

On July 15, two vice mayors of Tianjin hosted a meeting about restarting some dangerous goods operations, a source close to the matter told Caixin.

In the meeting, the Tianjin government ordered the transport and the port departments to work with the state-controlled Tianjin Port Sinochem Dangerous Goods Logistics Co. Ltd. to resume transporting two of the nine categories in the United Nation’s dangerous goods classification — corrosive and miscellaneous goods.

Corrosives refer to acids, dyes and other substances that can degrade materials upon contact. Miscellaneous goods include a variety of substances such as dry ice, fuel cell engines and magnetized material.

The 2015 Tianjin warehouse blast killed 165 people, injured 798 and caused nearly 7 billion yuan ($1.03 billion) in damage. A total of 49 suspects, including employees of a logistics company and local government officials, received sentences from suspended death to three years in prison for their roles in the accident.