By Hou Wen and Pan Che 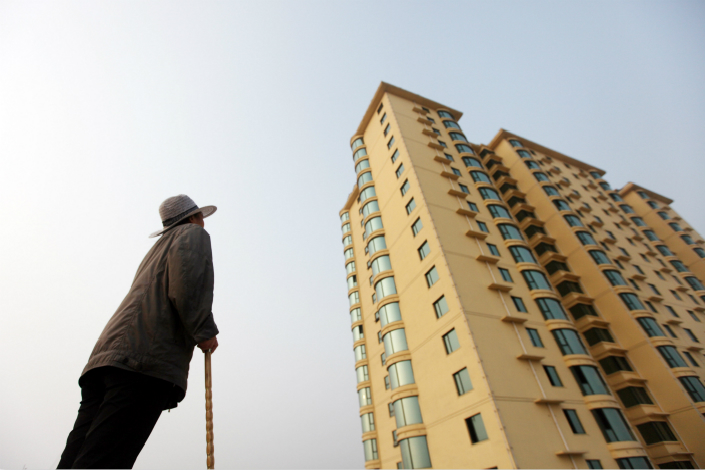 Chinese real estate developers issued 32 offshore bonds worth a total of 121.3 billion yuan ($18.04 billion) from May through July 25, and the total for the year through July 25 surpassed that for all of 2016. Above, a man examines a high-rise building in Anyang, Henan province, in September 2013. Photo: Visual China

In less than three months, from the beginning of May through July 25, Chinese real estate developers issued 32 offshore bonds worth a total of 121.3 billion yuan ($18.04 billion), according to Tianfeng Securities’ fixed-income research group, citing Bloomberg data.

Hong Kong-listed China Evergrande Real Estate Group — China’s second-largest property developer by sales — was among the biggest borrowers, raising a combined $6.6 billion from foreign investors since May, with dollar-denominated bonds of three different maturity terms offered at coupon rates of 8.75%, 7.5% and 6.25% respectively.

A senior executive at a securities firm told Caixin that the official approval given by the National Development and Reform Commission (NDRC) — which oversees offshore corporate debt-issuance — to developers for selling bonds overseas is usually valid for one year. However, it is possible that real estate developers obtained official approval earlier and issued bonds in June, which may have been the cause of offshore bond sales’ hitting a single-month record high of 81.3 billion yuan.

In the second quarter of this year, the NDRC halted approvals. As a result, developers made only 12 offshore bond sales from April 1 to June 15, raising 26.2 billion yuan, down from 25 offerings in the first quarter, which raised 69.9 billion yuan, according to Wind data.

Against the backdrop of the yuan’s weakening against the U.S. dollar last year, offshore bond offerings carried high repayment costs. Despite this, offshore bond sales made by Chinese developers have surged since the second half of 2016. Business insiders told Caixin that the surge resulted from government curbs on bank lending and from new funding to honor financial obligations of previously issued bonds.

In late 2016, regulators put the squeeze on bond sales by real estate developers on China’s two stock exchanges, resulting in reduced funding sources. Offshore bond sales then went up on the heels of the policy tightening.