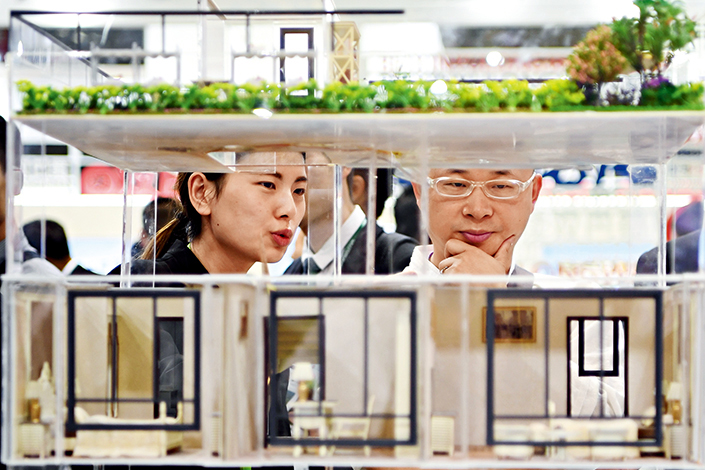 It has grown increasingly difficult for China's real estate developers to take on debt this year as they find themselves squeezed by government curbs on bank lending and a regulatory campaign to force the financial sector to deleverage and improve risk controls. Photo: IC

(Beijing) — Debt is the lifeblood of Chinese real estate developers. Until they can refill their coffers with cash from property sales, they need money to fund their operations, such as buying raw materials, paying workers, paying government fees and, most important of all, buying land.

But this lifeblood is being slowly drained as developers find themselves squeezed by government curbs on bank lending that aim to deflate the housing bubble, as well as a regulatory campaign to force the financial sector to deleverage and improve risk controls. One by one, regulators have restricted the sources of funding available to builders — bond issuances, private equity and bank lending. Now, with even the costliest and riskiest form of borrowing — via trust companies — under scrutiny, companies are running out of options.

“This tightening is aimed at controlling liquidity risk and preventing isolated bad debts from triggering a domino effect,” said Yan Yuejin, director of E-house R&D Institute, the research arm of real estate service provider E-house China. “Some firms borrowed to buy land at high prices to become so-called land kings,” Yan said, referring to developers who have paid record prices for land. “But there is a risk that these developers cannot pay back their loans, so deleveraging has become a form of risk control. In the process, however, it’s become increasingly difficult for developers find reliable sources of finance.”

The government began to restrict the flow barely a year after it opened the spigot in the second half of 2015, when it was making an effort to revive investment in property development following its collapse during the previous round of tightening.

The curbs had a devastating effect on issuances. Bond sales had surged to 652 billion yuan ($95.46 billion) for the whole of 2015 after hitting just 90.5 billion yuan in the first half of the year, according to data from Wind Information.

But issuances collapsed again this year — with just 152 billion yuan of sales as of June 15, down from 614 billion yuan over the same period last year, Wind data show.

Developers with the wherewithal turned to the offshore bond market, mainly in Hong Kong. Those developers included big players such as Evergrande Real Estate Group, China’s second largest property developer by sales, and Greenland Group. But in the second quarter of this year, the National Development and Reform Commission (NDRC), which oversees offshore corporate debt issuance, halted approvals.

Developers made 12 offshore bond sales from April 1 to June 15, raising $3.9 billion, down from 25 offerings that raised $10.4 billion in the first quarter, according to Wind data.

In March, as part of what has become known as a storm of regulatory activity, the China Banking Regulatory Commission (CBRC) ordered lenders to carry out internal checks into the amount of money being funneled into the real estate sector through interbank loans and wealth management products.

Banks were required to complete their reviews by June 12 and rectify any problems before Nov. 30. However, people close to the banking regulator told Caixin that some banks have been allowed to delay submitting their reports by one or two months after they complained that the tight deadline was impacting their normal business operations.

Most recently, the CBRC has turned its attention to trust firms. These act as intermediaries to channel funds from one company to another and from banks to companies via off-balance-sheet lending in an effort to circumvent credit controls. An April policy document on risk management ordered banks to increase scrutiny on trust firms that had a significant or growing business in providing financing to developers. Rules covering on-site inspections of trust firms issued in late May are expected to increase pressure even further on this popular source of financing for developers.

It’s difficult to find comprehensive data for the amount of money loaned to property developers through trust companies, but a report from the China Trustee Association in March showed assets under management by trust companies topped 20 trillion yuan at the end of 2016, driven largely by the so-called channeling business, where trust products serve as a fundraising tool for companies that can’t get bank loans.

Much of the shadow banking funding that has found its way to developers has been done through what’s known as “fake equity real debt” deals, a practice that involves disguising loans to risky borrowers, such as local government financing vehicles (LGFVs) and property developers, by making them appear as equity investments.

If a developer wants to get a bank loan to develop land, he needs to obtain four key certificates and show that 30% of the project’s investment will come from internal funds. To meet this criteria, many developers, especially smaller companies, use trust companies to raise money through “fake equity real debt” deals, a source with Zhonghai Trust Co. Ltd., a trust company controlled by state-owned oil giant China National Offshore Oil Corp., told Caixin.

Data from the National Bureau of Statistics (NBS) gives an indication of the impact that the squeeze has had on developer funding from bonds, shadow banking and fake equity deals. Investment using “self-raised funds” fell 3.4% year-on-year in the January-May period to 1.8 trillion yuan, compared with a 1.4% increase in the same period last year.

The NBS figures show developers are increasingly relying on money provided by buyers — deposits and advance payments jumped by 20.3% to 1.78 trillion yuan year-on-year in the first five months of 2017.

Bank credit has also become a more important source of funds despite government guidance to commercial banks to curb lending to the industry. In the first five months of 2017 domestic bank loans to property developers jumped by 17.3% to 1.05 trillion yuan, compared with an increase of just 2.3% in the same period in 2016, according to NBS data.

Central bank data confirm this trend. Outstanding loans for residential real estate developments were 4.8 trillion yuan at the end of the first quarter, 19.7% higher than a year earlier and 9% higher than at the end of 2016, according to the People’s Bank of China (PBOC), which releases the figures quarterly.

The authorities are not taking a uniform approach to lending. One employee from a local branch of the PBOC told Caixin that the rules vary by city. “Regulators currently support loans to developers, especially for social housing developments, but there are regulations limiting loans for land purchases,” he said.

Commercial bank officials have told Caixin that banks have grown more cautious about lending to developers. A corporate banking executive at a Zhejiang branch of a state-owned lender told Caixin that bank personnel have become more careful in granting credit. Previously, some banks turned a blind eye to large loans that were split between different branches of the same bank, but now they must be considered one loan, he said.

An employee working in the real estate finance department of a joint-stock commercial bank told Caixin that the bank’s loan approval process has become stricter under pressure from regulators.

The real estate industry appears to have coped with the squeeze on funding so far without any major credit events or panics, although some smaller developers have gone bankrupt.

Listed companies in particular have managed to restructure their debt profiles over the last two years, replacing short-term liabilities with long-term debt, according to a report from brokerage Haitong Securities published in May. Based on data from the annual reports of 139 real estate companies listed on the Shanghai stock exchange, Haitong said that the ratio of short-term debt — or debt maturing within one year — to total debt fell to 39% in 2016 from 46% in 2015. The number of companies whose short-term debt accounted for less than 30% of total debt rose to 62 in 2016 from 35 in 2015, Haitong analysts said.

But more pain is on the way. The slump in the number of new homes sold this year as a result of the government’s intensifying administrative curbs on purchases could put a strain on cash flow and working capital as income from deposits, advance payments and mortgage loans slow down. That could push some smaller developers further into risky and shadowy financing channels such as trusted loans, “fake equity real debt” deals and private lending, Haitong Securities said.

The interest rate that developers have to pay on their bonds is also rising as the financial deleveraging campaign has tightened liquidity. Coupon rates on bonds issued by real estate developers averaged around 4% last year, but that’s risen to as high as 5.5% this year, and some companies have had to pay more than 6%, according to data from Centaline Property, a real estate consultancy. Interest rates charged by banks are also rising, according to central bank data, even though benchmark interest rates have not changed. The cost of borrowing in the interbank market is also increasing, meaning that companies who borrow through shadow banking are facing higher rates.

The companies most at risk are those who spent aggressively last year to buy up land, especially smaller companies with less financial firepower than the big state-owned players, according to Haitong Securities.

Among these land kings are Tianjin Real Estate Group Co. Ltd., a real estate company in Tianjin. One of its subsidiaries, Tianjin Tianfang Dingxin Construction, entered a bidding war at an auction last year and bought a 52,000-square-meter site in Tianjin’s Heping district for 10.2 billion yuan, more than double the 4.5 billion yuan reserve price, according to the Tianjin Land Exchange Center.

The squeeze on financing has led to a wave of project-based partnerships between large property developers and smaller, less well-known firms, according to Centaline Property analysts. This usually takes the form of the big company buying an equity stake in a project owned by a small developer and signing a revenue-sharing deal based on the size of the stake.

For the large players, linking up with small companies who have already bought land is cheaper than buying land themselves through government auctions, while the small companies are attracted by the brand reputation and marketing experience of the big firms, which they hope will help them sell properties faster and at higher prices, said Tao Qi, chief analyst of Centaline Property’s Research Institute.

Rather than purchase land from government auctions, China Vanke Co., the country’s biggest property developer, took on 11 new land-acquisition projects in April, most of which involved cooperation with other developers. The numbers were disclosed by Zhu Xu, the board secretary, during a conference call with analysts and investors in May, according to a transcript of the meeting seen by Caixin.

As the restrictions on funding show no signs of easing, analysts and industry executives expect smaller companies to get squeezed out of the land market to the advantage of larger rivals who have deeper pockets and better access to loans.

Yang Hongxu, deputy director of E-house R&D Institute, said he is not optimistic about the outlook for smaller players. “Larger enterprises will not be affected, as their credit ratings are high and they can obtain low-cost financing,” Yang told Caixin. “Subsidiaries of government-owned enterprises will get funding support from their parent companies.”

Gao Bin, Shanghai district vice president of Hong Kong-listed property developer Country Garden, sees the market polarizing. “In the second half of the year, there will be a clear division in the types of developers that can obtain land,” he said. “Developers with scale will have a window of opportunity to purchase land, while smaller developers will be held back by cash constraints.”