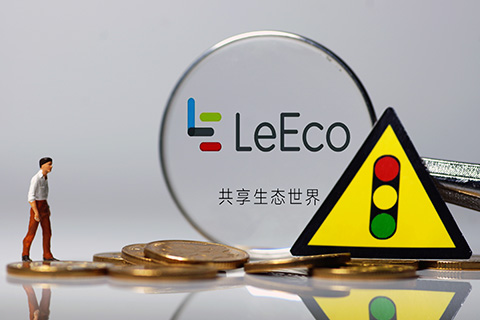 A Beijing court has ordered 250 million yuan of LeEco assets to be frozen. Photo: Visual China.

According to a ruling released Tuesday, an intermediate court in Beijing approved two separate CCB requests filed last week to freeze assets including bank deposits and other properties owned by Shenzhen-listed Leshi, Jia Yueting and his brother Jia Yuemin for one to three years.

It was the second court order to freeze LeEco assets within a month, following a Shanghai court’s decision involving 1.2 billion yuan of assets owned by LeEco subsidiaries and Jia Yueting for missed loan payments to China Merchant Bank.

LeEco is mired under mounting debts after years of aggressive investments to expand into smartphones, online video, entertainment and electric cars. Public documents showed that over the past six years, LeEco’s listed and unlisted arms have raised more than 50 billion yuan through share placements, equity sales, bond issuance and other methods.

As of March 31, Leshi had about 3.7 billion yuan in cash. But the company foresees declining income amid parent LeEco’s cash crunch. Leshi projected a loss of as much as 642 million yuan for the second quarter, compared with a net profit of 123 million yuan the first quarter, according to a company report.

The cash crunch at LeEco’s unlisted units may be even worse, given opaque financial reporting. In early July, LeEco defaulted on a $75 million convertible bond. LeEco has proposed deferring redemption of its bond by another year, or converting the amount owed into preferred shares of LeEco’s unlisted units, such as car-making and entertainment, according to bondholder Shanghai Qicheng Asset Management Co.

Amid the debt crisis, LeEco founder Jia Yueting has stepped down from his posts as legal representative and chairman of the listed arm. But he vowed in early July to take responsibility for his debts to suppliers and financial institutions. Jia has provided credit guarantees for many of LeEco companies’ debts.

A government source told Caixin that as LeEco’s debt crisis mounted, creditors have found that Jia’s guarantees have little value for controlling losses.

According to Leshi’s statement in late July, all of the 25.67% of Leshi owned by Jia had been frozen on creditors’ requests. The total value of assets frozen in response to demands by creditors far exceeds the value of Leshi shares owned by Jia, meaning that many creditors will be unable to recoup losses even after winning support in court, a bank executive said.

Leshi last traded at 30.68 yuan per share on April 14 and hasn’t been traded since. As the debt crisis deepens and business declines, Leshi’s share price is expected to slump once the stock resumes trading. Earlier this month, several mutual funds slashed the value of their holdings in Leshi by about one-third.