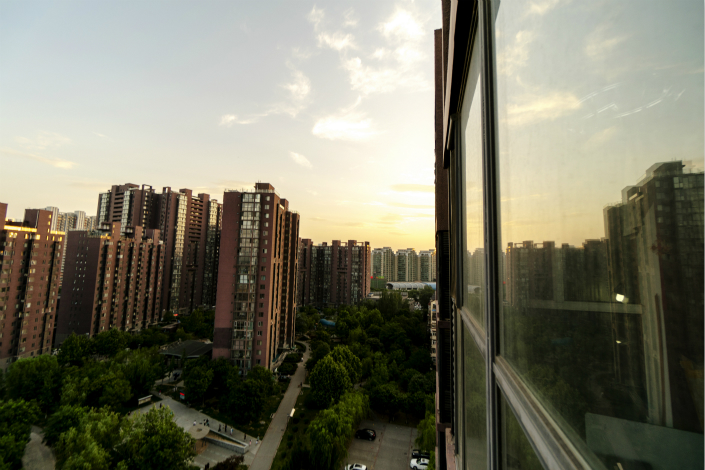 New-home sales measured by floor space dropped 46% year-on-year in July in the first-tier cities — Beijing, Shanghai, Guangzhou and Shenzhen. Above, residential buildings are seen in Beijing's Tongzhou district in May. Photo: Visual China

(Beijing) — China’s property market continued to cool in July, with sales of new and existing homes slumping amid the government’s campaign to contain a property bubble in a growing number of cities.

Nationwide, new-home sales measured by floor space dropped 46% year-on-year in the first-tier cities — Beijing, Shanghai, Guangzhou and Shenzhen — and by 23% in 16 key second-tier cities, including Hangzhou and Nanjing, according to data from China Index Academy, an independent property research firm.

In Beijing, sales of existing homes measured by the number of contracts signed online in the official property transaction monitoring system dropped 68% year-on-year in July to 7,158 units, marking the fourth straight month of declines, according to a report from 5i5j, one of country’s top real-estate service providers.

The Beijing municipal government stepped up controls on the city’s property market in March as prices defied previous curbs imposed in the fourth quarter of last year. The municipality issued a blizzard of restrictions on home purchases aimed at defusing the surge in prices. The policies, which made the buying and selling of residential property more difficult, have shut out of the market many prospective purchasers and led to a sharp drop in home sales.

Kong Dan, director of market research at B.A. Consulting and 5i5j, the market research arm of 5j5j, told Caixin that existing-home sales now account for 70% to 80% of the total transactions in Beijing’s residential property market as the city’s urbanization rate is at a mature stage.

In spite of the property curbs and the collapse in housing sales in many cities caused by the government’s administrative controls, demand for housing remains high, especially in heavily populated first-tier cities, given their size and the strong impulse among residents to move up the property ladder.

Kong said he doesn’t see any prospect of the government loosening up on the controls until at least March 2018. “The government needs the property market to be stable before the upcoming 19th National Congress of the Communist Party,” he said.