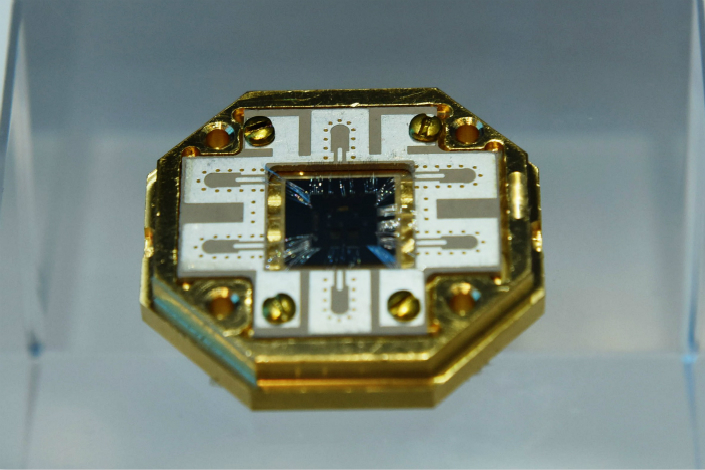 A total of 17 new chip plants are slated to be built in China over the next two years. Above, a superconductive chip on display in October 2015 at the University of Science and Technology of China in Hangzhou, Zhejiang province. Photo: Visual China

Beijing’s resolve to build a world-class microchip sector has touched off a $100 billion spending spree on new production facilities, in a massive investment wave likely to create short-term equipment and material shortages and potentially lead to a longer-term global glut.

But China’s road to global prominence in making microchips that are central to future digital economies could be filled with potholes, especially for the field of young and inexperienced domestic companies that are taking up the cause using billions of dollars in largess from Beijing, analysts said.

Some 17 new chip plants, often called fabs, have been recently announced and are set to get built over the next two years, according to industry tracking firm TrendForce. Names behind some projects include global heavyweights like Taiwan’s TSMC and U.S.-based GlobalFoundries.

But many of the plants are being built by more local, less experienced players, led by a group of companies based at the prestigious Tsinghua University that often go under the banners of Unigroup and Unisplendour. Those and other domestic investors have tried to buy related global assets like U.S. memory giant Micron Technology Inc. and Germany’s Aixtron SE over the last three years, only to see many of the deals vetoed by Western governments wary about Chinese ownership.

In response, Chinese companies have redirected much of their effort into a construction spree at home using a mix of local and imported expertise. TrendForce estimates the 17 new plants alone will include combined investment of at least $110 billion.

“This much new capacity will definitely have an impact on the global market,” said Sheng Linghai, a semiconductor analyst at market research house Gartner, adding his own forecasts that the 17 new plants will involve investment of at least $85 billion and could add around 15% to global capacity. “But semiconductors are not like other industries. It’s not as if you can just add capacity and there will be customer orders and you can start production.”

As a manufacturing hub, China is the world’s largest consumer of microchips that power everything from microwave ovens to smartphones and a growing array of smart devices in the increasingly important worldwide digital economy. But the country imports the majority of those chips from big global designers like Qualcomm and Intel, which earn big profits from their sophisticated intellectual property.

In a bid to move up the value chain and away from lower-margin manufacturing, Beijing has earmarked billions of dollars to develop the nation’s microchip sector. Local companies are taking advantage of that money, while local governments are also offering their own incentives for new companies to set up shop.

Analysts said the new fabs should start coming on stream around the second half of 2018, though common delays could mean that many won’t begin commercial production until 2020 or even later. The building boom and sudden capacity surge could provide a windfall for chip-making equipment manufacturers like Applied Materials Inc. and ASML Holding, as well as makers of the high-tech wafers and other materials needed for chip production.

But the build-out is likely to be uneven, potentially adding large amounts of poorly-designed capacity to the sector from the inexperienced players.

“Fab projects initiated by manufacturers with experience in mass production will probably proceed smoothly,” said TrendForce research manager Lin Jian-Hong. “New entrants to market will have to face … hurdles as they work to complete their fabs.” Lin added that some of those major hurdles will include lack of equipment and experienced workers, uncertainties about securing customers and lack of necessary funding for long-term operation.

In addition to the Tsinghua family, other domestic builders that could face an uphill climb due to relative inexperience include newer names such as Yangtze Memory Technologies Co. Ltd. and Fujian Jinhua Integrated Circuit Co. Ltd., which are building state-of-the-art 12-inch wafer factories in interior Hubei province and coastal Fujian province.

Regardless of hiccups, the massive new investment is quite likely to have a major impact on the global market, driving down prices, creating material shortages and potentially causing a glut from too much capacity. Such rapid buildups in China that result in global gluts are relatively common, occurring in industries from steel to solar panels when companies rush to fulfill Beijing’s policy objectives and obtain government largess.

“The new semiconductor manufacturers … will add their capacity into the market and cut prices to attract customers,” said TrendForce’s Lin. “Under this distant scenario, downward price pressure in the chip market will also expand significantly.”

Gartner’s Sheng noted that overcapacity is most likely to strike the lower end of the chip market, since many of the younger Chinese players will be unable to make the higher-end products due to a lack of technology and expertise.

“The biggest effects on the global market will come after 2020,” he said. “Honestly speaking, most of them are planning to start producing before that, but there are often delays. So I expect the big assault could be even later.”