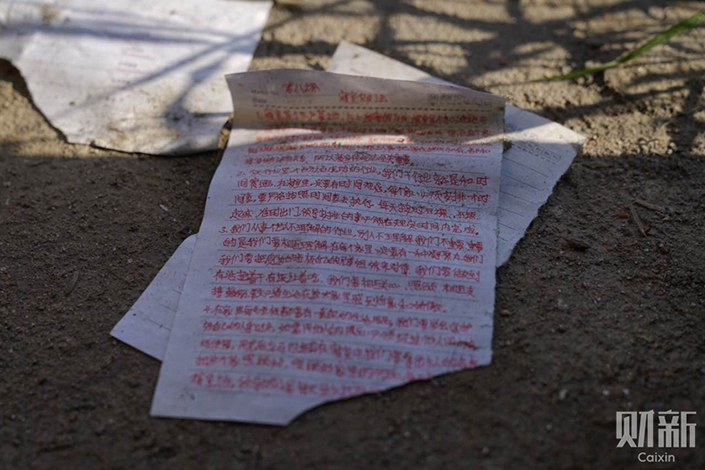 Police in Tianjin have detained five members of an alleged pyramid scheme in connection with the death of a college graduate. Above, notes are seen from a notebook that police found near the graduate’s body. The notes were taken from a class run by a group allegedly running the pyramid scheme. Photo: Yang Yifan/Caixin

(Beijing) — Police in the northern port city of Tianjin have detained five members of an alleged pyramid scheme in connection with the death of a college graduate who was duped into joining the group in late May, police said.

The fully-clothed body of Li Wenxing, a 23-year-old native of Shandong province, was found floating face-up in a pond on the city’s outskirts on July 14.

Police found a notebook near the shallow pond that contained details about the cosmetics products of a brand linked to a pyramid sales scheme known as Diebeilei.

The notebook led police in the city’s Jinghai district to open an investigation.

In a statement released Sunday, the police said that a member of the scheme lured Li into participating by posting a bogus ad on a job-hunting website while posing as a recruiter from a Beijing-based software company.

After replying to the ad, Li was tricked into traveling to rural Jinghai district on May 20, where he was admitted to a dormitory controlled by one of the five suspects.

Over the next few days, Li was transferred two more times before he was settled at a location in the same district controlled by another suspect. He paid an unspecified sum to sign up for the scheme and was allowed to freely interact with other members in the group, according to the police statement.

The cause of Li’s death is still under investigation, but the tragedy set off a debate in the media and the broader public over why authorities have failed to break up such schemes, some of which have been operating for years in apparent violation of the law because they restrict the freedom of their members.

Li’s death might not be an isolated case, according to locals who spoke to Caixin. One woman in Jinghai told Caixin that two members of a pyramid sales scheme operating in the district fell into a different pond while fleeing from the group in the winter of 2016. One of them drowned.

Caixin was unable to confirm the story with local police.

Police in Tianjin’s Xiqing district said in a notice Monday that they discovered the body of another young man who was linked to a pyramid sales operation, though it remained unclear whether it was the same organization.

Zhang Chao, 25, also from Shandong, became involved with a pyramid scheme on July 10, according to police. He suffered a heat stroke three days later. Two other members of the scheme, planning to send Zhang home, hired a local to drive him to a railway station. However, the three men, who are now detained, ended up dumping the dying Zhang on the side of a rural road.

The district police did not explain why it took them nearly a month to release the information about Zhang’s death. The autopsy on his body has not yet been completed, according to the police.

Boss Zhipin, the online recruitment platform that led Li to the pyramid scheme, has also taken criticism for failing to scrutinize employers who post job ads on the site.

The company acknowledged in a statement Thursday that it played a role in Li’s death. It blamed its poor scrutiny on a holdover policy from its launch three years ago that allowed employers to post ads without going through a verification procedure.