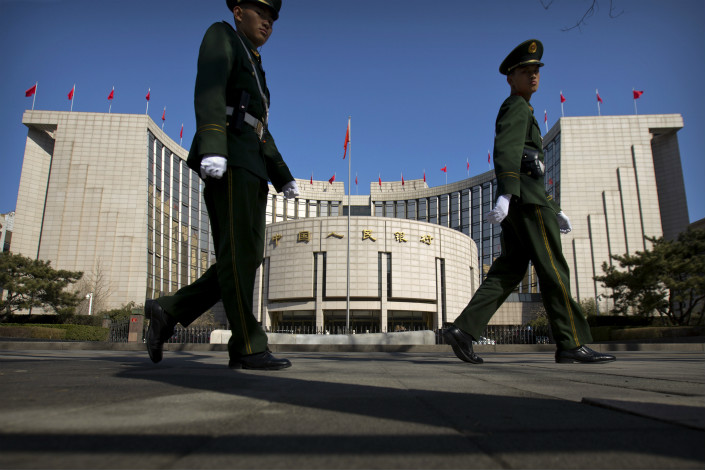 The People's Bank of China (PBOC) said it is looking at including "large-scale online finance companies that have systemic significance" into a program originally created to evaluate banks. Above, two Chinese paramilitary police officers walk past the PBOC headquarters in Beijing on March 10. Photo: IC

China is considering including major internet finance companies in its system that was originally designed only for evaluating bank safety, the central bank said.

Online lending and third-party payments are mushrooming in China, but are still largely outside regulators’ reach. There are now more calls for the government to step up oversight of these services’ providers, which function much like traditional banks but are seen as a hotbed of hidden risks that could topple the highly leveraged financial system.

The People’s Bank of China has been working with various regulators for more than a year now to rein in risks in this nascent yet thriving sector. The cross-agency working group is tasked with cracking down on frauds in online payments, peer-to-peer (P2P) lending, crowdfunding, wealth management and online insurance, sources told Caixin. They added that the working group might need another year to clean up the risks in the sector.

The PBOC said in its Friday statement that it is “studying to include large-scale online finance companies that have systemic significance into the Macro Prudential Management framework, and include them in Macro Prudential Assessment (MPA) in a bid to curb systemic risks.”

MPA, launched in early 2016, regularly evaluates risks of banks. Through MPA, the central bank has stayed abreast of banks’ capital adequacy, leverages, assets and liabilities, liquidity and foreign debt risks. The central bank has signaled its intention to expand the assessment to other financial institutions such as securities brokerages and insurers that are not under MPA.

Major risks associated with internet finance include an absence of proper operating licenses, a lack of sufficient risk control and misleading promotional information. The central bank said it is necessary to guard against contagious risks as the sales of online financial products may involve multiple markets.

The P2P industry, for instance, has long been plagued by frauds and scandals, such as Ponzi schemes and managers who have disappeared with clients’ money. There were 2,795 P2P lending sites by the end of 2016, granting 2.41 trillion yuan ($358 billion) worth of loans during the entire year, which doubled the value in 2015, according to data released by the PBOC in the report.

Among the most egregious scams was Ezubao, once a leading P2P service until it was shut down in December. According to police, the company milked more than 50 billion yuan out of about 900,000 people in less than two years, using fake companies posing as borrowers.