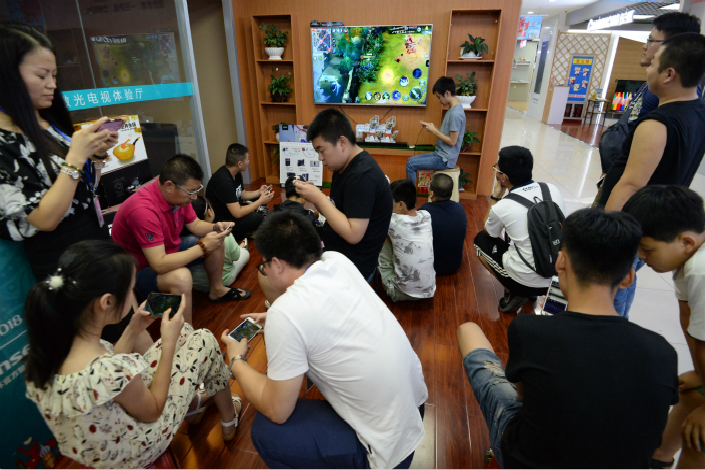 PLA Daily has published an editorial criticizing the amount of time that some Chinese soldiers play the online game "Honour of Kings," likening the game to "electronic opium." Above, civilians play "Honour of Kings" at a shopping mall in Handan, Hebei province, on July 29. Photo: Visual China

School-age teens aren’t the only ones getting hooked on “Honour of Kings,” the wildly popular mobile game from internet titan Tencent.

Young officers in China’s military are also falling prey to the game, leading the influential PLA Daily to publish a critical editorial in the health section of its Monday edition. The criticism came less than a month after the even-more influential People’s Daily, considered the voice of the Communist Party, leveled similar harsh words against the mobile game, which has become a huge breadwinner for Tencent Holdings Ltd.

“Recently this game has penetrated its way into the lives of some officers, not only affecting their normal studies and drills, but also influencing their health to some extent,” the paper said, in an editorial headlined “Don’t Get Hooked on ‘Honour of Kings.’ ”

The game combines Tencent’s strengths in games and social networking to create a potent mix that lets groups of friends form virtual teams that can play other teams over their smartphones. In response to the earlier criticism, Tencent limited play by minors to two hours or less per day.

But those limits don’t apply to enlisted men and women, who are allowed to use their smartphones during downtime and often become absorbed in the game as soon as they have a chance, according to the PLA Daily editorial. It pointed out that the game already has more than 200 million users, including 50 million who actively play each day.

“Some have described the game as ‘electronic opium’ because it’s easy to become addicted to playing,” the newspaper said. “Some lower-level soldiers have reported that as soon as the weekend comes, they will go to visit their fellow soldiers, only to discover that all of them are holding their smartphones, their entire attention glued to video screens.”

A Tencent spokeswoman was not immediately available for comment on the latest criticism.

Chinese military media, which are mostly read by members of the armed forces, often follow the lead of more mainstream media on this kind of topic, said a source close to one such media, speaking on condition of anonymity due to the sensitivity of the situation. Another source confirmed that many of his young military friends are big fans of the game, and that his personal distaste for online games has made him a slight pariah within those circles.

“Every time one of our drills was finished, many of my fellow soldiers would play this game,” he said, commenting on a recent experience. “I personally think this game is somewhat harmful, so I support the PLA Daily’s point of view.”