By Shi Rui and April Ma 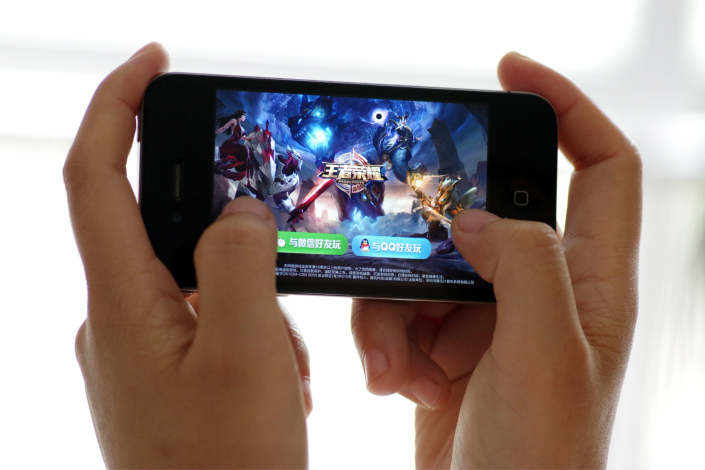 Tencent Holdings Ltd. announced it will implement an "addiction prevention system" for its wildly popular mobile game "Honour of Kings to give parents more control over how much time their youngsters play the game. Photo: Visual China

(Beijing) — Beginning next week, younger players of the world’s most popular mobile game, “Honour of Kings,” will no longer be able to sneak under the covers for a few more rounds of cyber fun.

The strategy game, in which teams of five players battle each other, has whipped up a nationwide mania, winning fans from elementary school students to middle-aged gamers in their 50s.

But since most of the record-setting 200 million players are young, the game has drawn criticism for inducing compulsive playing. It has even been called a “pesticide” in a nod to its allegedly toxic nature.

In response to these criticisms, the game’s maker, Tencent Holdings Ltd., has said it will implement an “addiction prevention system” that will limit gaming time and allow for expanded parental control over their adolescents’ playing.

The functions — which Tencent said will be rolled out Tuesday — include a real-name registration system that will be able to identify users under age 12 and those 12 to 17 years old. A 9 p.m. curfew and 1-hour cap will apply to those younger than 12, with a two-hour limit for those who are 12 to 17. The policy will apply only to “Honour of Kings” and not to Tencent’s other games.

Headline-grabbing reports of negative effects on adolescents have filled the Chinese media over the past few months: a child who jumped from a building because his father took his phone away; a 10-year-old who splurged on the game thousands of yuan that was supposed to pay for a grandparent’s medical expenses; a 17-year-old who suffered a stroke after falling too deeply under the game’s mesmerizing effects.

Following the publicity over Tencent’s addiction-curbing polices, the number of users who have signed up for its parental monitoring system — launched in February — doubled in less than a week, the company said. The new functionality will allow the now-1.73 million parents with child players to switch off the game on multiple devices, and to more closely monitor playing times.

A frenzy of this scale has been a windfall for Tencent. The company has raked in 12 billion yuan ($1.76 billion) in revenue from the game in the first quarter alone — an amount on par with Nasdaq-listed Sina Weibo’s earnings for a full year. For a single piece of virtual gear in the game — for example, a character with special powers — users spend a combined 150 million yuan per day, a figure outstripping the monthly revenue of smaller startups.

China’s state media continues to draw attention to the subject of addictive gaming in general and adverse aspects of “Honour of Kings” in particular. After briefly relenting on the game’s “menacing” impact on society and instead emphasizing the responsibility of parents and guardians to steer children into physically stimulating activities, the People’s Daily on Wednesday again extolled users to “not let games run your life.”

“Playing games with friends is a way to ‘socialize,’ but as time passes, it may be difficult to distinguish ‘socializing’ from an ‘addiction,’ ” the editorial said. “Trifling games will sap the will.”