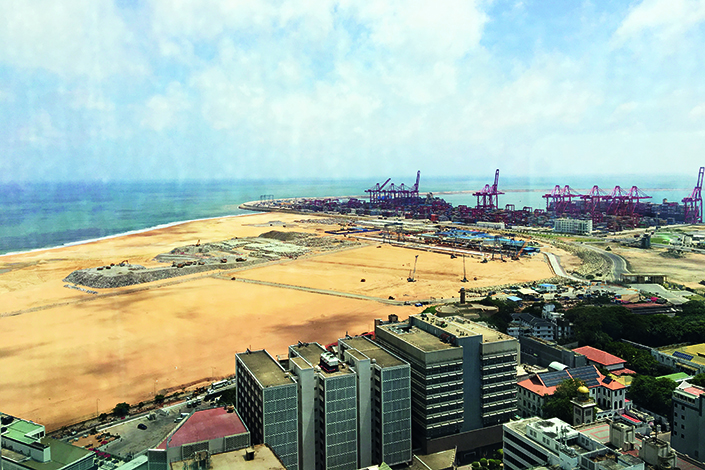 But the view from the top floor of the Hilton is changing dramatically. Between the new Colombo South Port and the Fort Lighthouse, specialized dredging vessels are depositing sand excavated from the seabed to build up a planned 269 hectares (665 acres) of reclaimed land.

The reclaimed land will be the site of the Colombo International Financial City, a new residential, commercial, and financial-center project that is central to the Sri Lankan government’s long-term plans for reconstruction after a quarter-century of civil war that ended only in 2009.

It has been less than a year since work resumed on the project after a 17-month hiatus. In the years since China Communications Construction submitted its proposal for the area, it has faced challenges that include unhappy fishermen and a regime change.

Located in the Bay of Bengal southeast of the tip of the Indian subcontinent, the island then known as Ceylon — under Dutch and later British colonization — was a major exporter of tea and precious stones. After Ceylon’s independence, Colombo’s port grew as a logistics hub connecting the Indian subcontinent, the Middle East, and East Africa. But in the late 20th century, the country was wracked by decades of civil war.

Now Sri Lanka is embarking on a massive rebuilding project funded largely by foreign investment, with Chinese companies playing an increasingly prominent role. China’s “Belt and Road” strategy has identified Sri Lanka as an important link in the “21st Century Maritime Silk Road,” and Chinese state-owned enterprises (SOEs) are eager to pour their money into infrastructure projects there.

In Colombo, China Communications Construction plans to finish reclaiming all of the International Financial City site’s 269 hectares — one and a third times the size of Monaco — by 2019.

International Financial City is the SOE’s first public-private partnership in Sri Lanka. Under its current agreement with the Sri Lanka government, China Communications Construction is responsible for financing, building and developing the area. When the project is completed, China Communications Construction will be granted the right to develop 65% of the area’s designated development zones for 99 years, with the government taking control of the other 35%.

The second stage of construction, once land reclamation is complete, will cost $13 billion, which China Communications Construction expects to raise from an international group of investors. In its final form, the city will have created an estimated 83,000 jobs and will house a population of about 250,000.

The Chinese SOE’s journey to Colombo hasn’t been all smooth sailing.

Local environmental groups had previously raised concerns that the massive reclamation and dredging project could damage the marine environment.

Work on the Port City had begun in September 2014. China Communications Construction’s Colombo representatives said in an email to Caixin that Sri Lanka’s port authority had signed a memorandum of understanding with the company after the company submitted an environmental impact report the previous year.

Wang Hao, general manager of China Communications Construction subsidiary China Harbor, told Caixin that the port city will fill an area between the existing shoreline and a breakwater perpendicular to it. Even if no reclamation were being done, Wang said, the area would eventually have been filled naturally with sand deposited by ocean currents.

“So our project is solving precisely this problem” of siltation, Wang said. The supplementary assessment found that reclaiming the land could prevent uncontrolled siltation in the harbor.

But the dredging of millions of cubic meters (cubic yards) of sand is causing more controversy than the reclamation itself. Local environmental organizations say dredging could potentially undermine the continental shelf and marine ecosystem at the dredging sites.

The project’s original dredging area was 30 kilometers (18.6 miles) north of Colombo, 5 kilometers off the coast. Its proximity to the Negombo Lagoon, home to mangrove swamps and coral reefs, was seen by local environmentalists as threatening local wildlife and increasing the risk of underwater landslides.

Wang said that the supplementary assessment found that the dredging area did not contain coral reefs, and was not expected to have a major impact on the lagoon.

China Communications Construction lost $380,000 for each day that the project was suspended. The Chinese ambassador to Sri Lanka lobbied the Sri Lankan president and prime minister in person, while back home in China, the government was preparing to resort to international arbitration.

But Dhammika Galgodalla, a local dredging engineer working on the China Communications Construction project, says “the reason for this hiatus was political.”

“The work should not have stopped. Even if there was a change in government, the policy should not also have changed,” Galgodalla said.

Under a new agreement signed last year, the port city was absorbed into the larger Colombo International Financial City plan, which aims to develop an Indian Ocean finance hub modeled on Singapore and Dubai.

Government approval may have been secured, but earning the trust of local residents is still an ongoing effort for the International Financial City’s Chinese developers.

In early July, local fishermen near Negombo Lagoon told Caixin reporters that their small vessels usually stay within 5 kilometers of the coast, and that they don’t frequently cross paths with dredging boats. But they are still worried that dredging will harm fish populations.

Wang said that in order to reassure local fishermen, the International Financial City’s Chinese developers are giving out 500 million rupees ($3.23 million) in subsidies that will be distributed by local government agencies. “This money is intended to provide the fishing community with insurance, to support them in health care, education, repair of boats and nets, and to build a fish-processing facility,” Wang said, according to local media reports.

Engineer Dhammika Galgodalla, on the other hand, sees opportunity rather than risk in the China-led project.

Galgodalla, who has been working as an engineer for 15 years, joined China Harbor in 2012 to work on the Colombo South Port. Together with his wife, a nurse, Galgodalla now boasts a total household income 50 times that of his family’s when he was born, a leap he attributes to the years of experience and opportunity from working on national, U.S.-, European- and now Chinese-led projects.

“In the future, I can open my own engineering and construction firm. I can work in any urban construction field, like road laying, building homes, and I can move onto many big projects,” Galgodalla said.

The completed International Financial City will be the centerpiece of a planned western urban belt pushed by Prime Minister Ranil Wickremesinghe. The west coast is Sri Lanka’s fastest-growing region, home to one-third of the country’s population, and accounting for 40% of its gross domestic product. The Sri Lankan government expects that by 2020, the area will have tripled its average income from 2012 levels, and doubled the scale of its IT industry to $5 billion.

On July 10, Colombo named U.S. architectural firm Skidmore, Owings & Merrill LLP the winners of an international competition to design a “concept master plan” for the port city. The firm’s winning design features shaded promenades, and a tropical city park — a vision that will not be fulfilled until 2041, the International Financial City’s expected completion date.