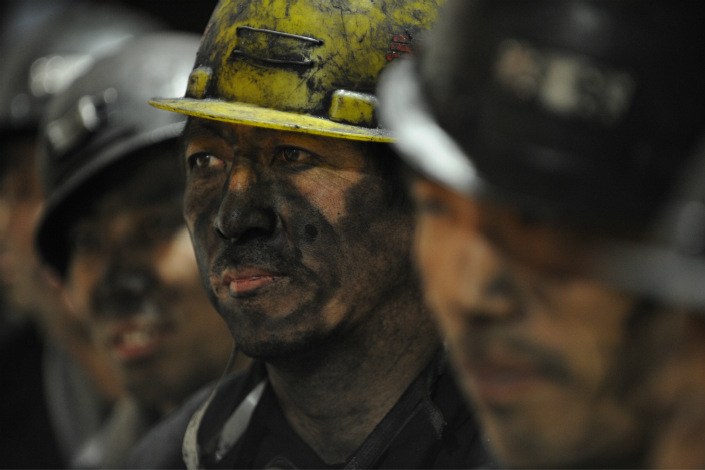 Coal dust covers the face of miners in November 2010 in Shanxi province. Authorities have decided to cut the country’s coal-fired power generation capacity over the latter half of the decade to deal with a glut in the industry. Photo: Visual China

(Beijing) — China’s economic and energy authorities have decided to cut the country’s coal-fired power generation capacity by 170 million kilowatts over the latter half of the decade to deal with a glut in the industry.

The planned capacity cuts come at time when China has been building more coal-fired power plants than it needs, while the government faces growing pressure from a public demanding better air quality.

China’s coal-fired power glut will amount to 140 million kilowatts by the end of the 13th Five-Year Plan period (2016-2020), threatening to leave 2.45 trillion yuan ($367.56 billion) worth of power plants idle, according to a May report by North China Electric Power University.

The NDRC and NEA disclosed the targets in guidelines published at the end of July, after the document was approved by the State Council, China’s cabinet.

The cuts also aim to save millions of yuan invested in coal-fired generation capacity that might end up being idle.

“Preventing and defusing oversupply risks in the coal-fired power industry are necessary steps to push forward supply-side reform,” Nur Bekri, head of the NEA and vice director of the NDRC, said at a televised news conference after the issuance of the guidelines.

The government plans to cut coal-generated power capacity by means including postponing construction of new power plants and shutting down outdated facilities.

In this year’s annual government work report in March, Premier Li Keqiang said China aimed to trim more than 50 million kilowatts of coal-fired capacity by the end of this year to optimize the country’s energy structure and support clean-energy development.

Initially, China’s 13th Five-Year Plan had called for up to 1.1 billion kilowatts of coal-fired power generation capacity by 2020.