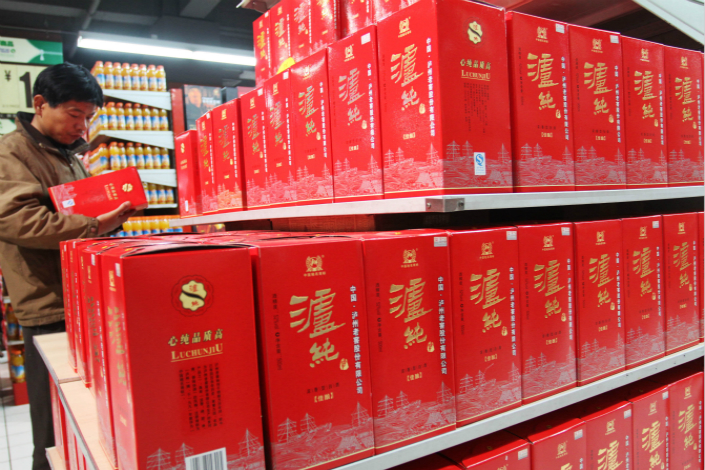 Luzhou Laojiao will spend the equivalent of about $60 million after taxes to acquire a former school property for a themed-village project that will be on about 8 acres in the liquor-maker's hometown of Luzhou, Sichuan province. Above, a customer shops for Luzhou Laojiao liquor in a supermarket in Xuchang, Henan province, in November 2012. Photo: Visual China

Liquor-maker Luzhou Laojiao will spend 420 million yuan ($62.9 million) to develop a themed village in its hometown in interior China’s Sichuan province, joining peers who have looked to similar developments to diversify beyond their core spirits businesses.

Luzhou Laojia’s announcement comes as many Chinese makers of traditional liquor, known locally as “baijiu,” emerge from one of their worst slumps in recent memory following Beijing’s rollout of a frugality campaign four years ago. That campaign hit famous liquor-makers particularly hard since such spirits can cost hundreds of dollars per bottle and are often consumed at banquets hosted by officials from the government and big state-owned enterprises.

To better protect themselves from future downturns, many of China’s most famous liquor-makers have developed similar tourist villages and other attractions, which receive strong support from local governments and also capitalize on brands that are well-known to many Chinese. Such attractions also cater to growing demand from China’s booming middle class for more tourism offerings.

Under its newly announced plan, Luzhou Laojiao will spend the equivalent of about 400 million yuan after taxes to acquire a former school property for the project located on about 8 acres in its hometown of Luzhou, the company said in a statement to the Shenzhen Stock Exchange. The distiller had first announced its intent to develop such a cultural project in its 2017 work report issued at the start of the year.

Luzhou Laojiao announced the project following its recent release of a midyear report that showed revenue and profit rose 20% and 35% respectively in the first six months of the year. The revenue growth was roughly the same as the figure for all 2015, while profit growth improved slightly from around 31% for that year.

But larger, more-premium names like Kweichow Moutai Co. Ltd. and Wuliangye Yibin Co. Ltd. took larger hits during the government clampdown. Moutai was one of the first to turn to theme parks to offset the downward pressure, investing nearly 100 million yuan over three years starting in 2013 to rebuild a Moutai museum and exhibition center attraction on a 30,000-square-meter (7.4-acre) land parcel in its hometown in Guizhou province. Moutai said it generated 30 million yuan in tourism-related revenue in the first eight months of last year, up 78% from a year earlier.