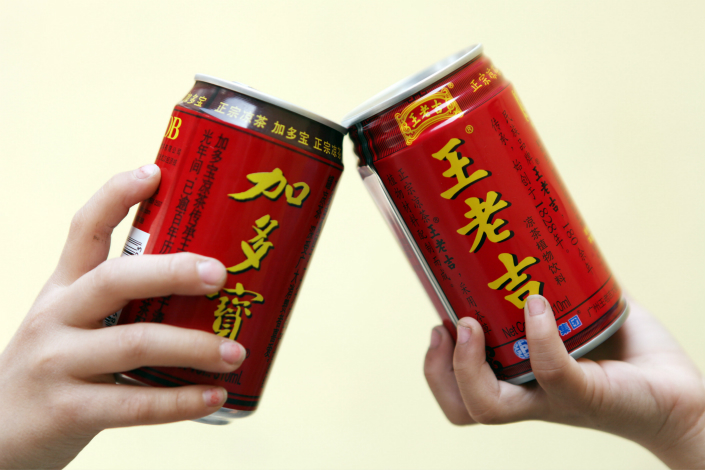 The Supreme People's Court has ruled that JDB Group's Jiaduobao tea (left) can use the distinctive red can and gold lettering that resembles that of Wanglaoji (right), the century-old brand owned by Guangzhou Pharmaceutical Group, with which JDB once had a licensing agreement. Photo: Visual China

Two parties at the center of a dispute surrounding one of China’s most popular drinks will be allowed to continue using similar packaging for their differently branded products now that the nation’s high court has overturned an earlier ruling in the matter.

The decision by the Supreme People’s Court brings to conclusion one major segment of the years-long dispute surrounding Wanglaoji, a popular herbal tea drink, also known as Wong Lo Kat, whose history dates back more than a century. The dispute broke out in 2010 when brand owner Guangzhou Pharmaceutical Group terminated a licensing deal with JDB Group.

JDB unsuccessfully tried to win back the rights to the drink name but failed and now sells a similar product under the name Jiaduobao, or JDB. But it was fighting to keep the rights to market its own product using packaging similar to Wanglaoji, using red cans with gold lettering closely associated with the product.

A lower court had ruled that JDB couldn’t use the red-and-gold packaging, but the Supreme People’s Court reversed that decision in a ruling on Wednesday. The court said the pair could both use the same red packaging with gold letters without infringing the others’ trademark. It also negated the lower court’s 2014 order that JDB pay 150 million yuan ($22.4 million) in damages for that part of the case.

“We are exuberant that JDB can continue to use the red packaging for our herbal tea,” JDB said in a statement welcoming the ruling. Guangzhou Pharmaceutical issued its own statement saying it will honor the decision.

The case has riveted Chinese consumers for years due to the popularity of the herbal beverage in the tea-drinking country. But the extended battle has also taken a toll on JDB, which lost a series of lawsuits and was forced to pay millions of yuan as compensation, and was forced to stop using the Wanglaoji name in 2012.

As a result of those financial pressures, the company said last week it has secured a major new investment from state-owned food giant China National Cereals, Oils and Foodstuffs Corp. (COFCO), which planned to buy about 30% of JDB subsidiary Qingyuan JDB Herbal Plant Technology Co. Ltd. for an unspecified amount.