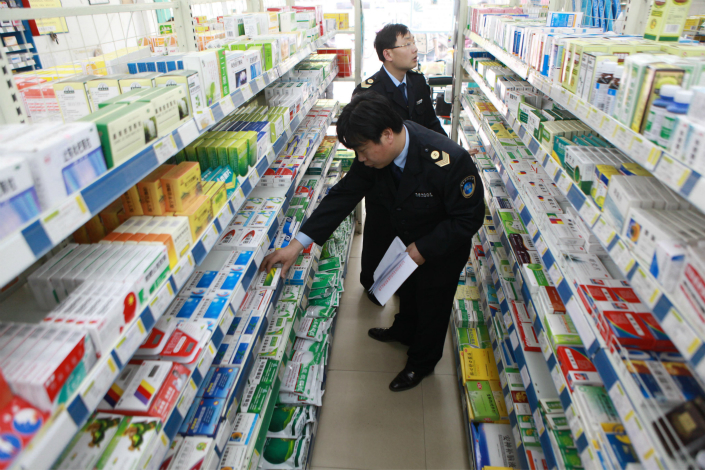 Under new legal interpretations, researchers convicted of falsifying data in studies or clinical trials for new medications could face up to 10 years in prison. Above, drug administration officials in Jiujiang, Jiangxi province, inspect medicines in a pharmacy in April 2012. Photo: Visual China

(Beijing) — China’s top court and prosecutor’s office have released a set of legal interpretations aimed at tightening the screws on rogue pharmaceutical companies and public hospitals that have been falsifying data to get licenses for new drugs.

Under the new legal interpretations, which were made public on Monday, researchers convicted of falsifying data in studies or clinical trials for new medications could face up to 10 years in prison.

Before two years ago, there had been few reports in China of patients’ falling victim to substandard drugs licensed with compromised data collected during fraudulent trials.

But the problem was laid bare when pharmaceutical companies withdrew applications for hundreds of new drugs after the China Drug and Food Administration (CDFA) took action in 2015.

The administration ordered the pharmaceutical companies behind 1,622 drugs in line for regulatory approval to conduct a monthlong review of their new product applications for potentially fraudulent data in studies and trials.

The administration promised not to punish companies that uncovered misconduct in their own reviews.

Many of the withdrawals resulted from false and incomplete data being used in studies and clinical trials of new drugs, said Wu Zhen, deputy director of the CDFA.

The administration dismissed 24 of the applications because the data gained from the drug trials were either false or inaccurate, Wu told the state-run Guangming Daily.

China’s judicial authorities often use legal interpretations to plug legal loopholes. Under the 2015 revisions to the country’s Criminal Code, the crime of falsifying documents applies only to people involved in accounting, auditing, legal services or asset appraisal.

In some cases, doctors at hospitals contracted by pharmaceutical companies to conduct clinical trials have flouted requirements for research subjects, allowing unqualified volunteers to participate in studies so the doctors could make more money, Xiu said.