In a First in China, a Court Will Handle Proceedings Only on Internet 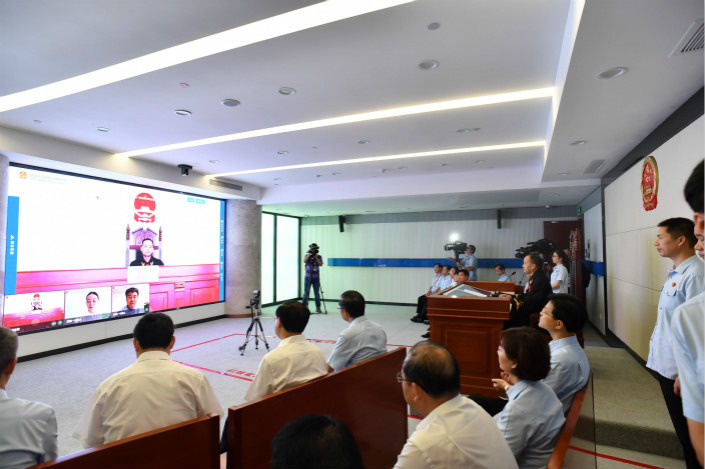 The Hangzhou Internet Court hears a case on Friday, its first day of operation. The court, which hears cases emerging from online disputes, is China's first court specializing in internet-related claims. Photo: IC

Legal disputes in e-commerce, digital copyrights and other internet-based contracts in China can now be settled without requiring plaintiffs or defendants to abandon the comfort of their easy chairs at home.

Starting Friday, the Hangzhou Internet Court began settling cases that emerge from online disputes — the first legal forum in the nation specializing in resolving internet-related claims, whose numbers are surging as the industry flourishes.

In the first lawsuit settled by the court, neither the plaintiff nor the defendant physically appeared in court, in which the author of a popular palace-intrigue novel sued NetEase Inc.’s online library unit over publication of the work.

Both parties testified via video conference before the judge, from the comfort of their home and office, over 1,000 kilometers (620 miles) apart, while a voice-recognition system simultaneously transcribed their words in place of a court stenographer.

Digital evidence — including contracts, screenshots and receipts — was shared between the three callers on their separate screens during the video conference.

The specialized court was set up to accommodate soaring number of internet disputes, which have risen to 100,000 cases in 2016 in Hangzhou alone, nearly 200 times the number in 2013, according to the city’s mayor. Hangzhou courts handle such a large number of these lawsuits largely because it is home to some of China’s most influential internet firms, including Alibaba Group Holding Ltd. and NetEase, who are often accused of legal breaches.

The case was settled in less than half an hour, but on the day of its debut, the special court already had on its plate 1,000 cases awaiting trial, according to the court’s official site. Caixin found that nearly 7 out of 10 of the upcoming trials concern Alibaba or its affiliates.

Though courts across the globe have been using technology such as videoconferencing to save witnesses time and money, the court in Hangzhou is the first of its kind in which neither defendant nor plaintiff need to step inside its doors, nor bring along printed materials.

Besides complaints about shoddy quality of products sold online, the Hangzhou Internet Court also accepts filings from across the nation for other online-related disputes — the breach of online service contracts, online financing disputes, and online copyright infringements.

Aiming to make this new legal system “as simple as shopping online,” the chief justice of the court in Zhejiang — of which Hangzhou is the provincial capital — said during a news briefing on Friday that the court intends to become a national pioneer of efficiency and, true to the themes of the types of cases it settles, a champion of information technology.

The document required to submit a case can be completed within five minutes, the court says, and upon registration — a process that employs facial-recognition technology to verify identities — and uploading evidence, both parties wait up to two weeks for a prelitigation mediation by phone or video chat. If their discord remains, the case is automatically accepted for trial.

The entire procedure, including payment of registration to payment of court fees, to the final verdict, will all be conducted online, and will not stretch more than 35 days, the court pledges, while the actual hearing will take an average of about 25 minutes.