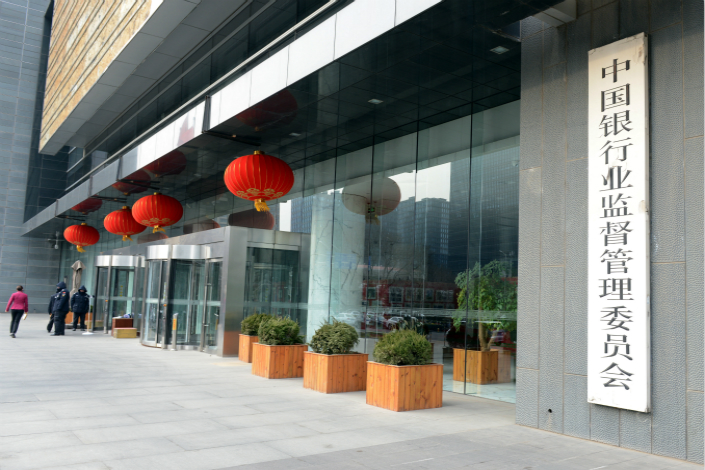 The China Banking Regulatory Commission, whose headquarters is seen above in Beijing on Jan. 18, plans to curb risks in three parts of the financial system: interbank transactions, wealth management products and off-balance-sheet transactions. Photo: IC

A slew of policies and tightened oversight appear to have reined in risks of the banking sector, China’s banking regulator said.

In the three months ended June 30, interbank transactions — mostly bills and short-term loans — fell from a year ago for the first time in seven years. As of the end of June, commercial banks’ interbank assets and liabilities both fell by 1.8 trillion yuan ($269.784 billion) from the beginning of the year, seeing growth drop by 5.6% and 2.3% respectively.

Outstanding wealth management products fell to 28.4 trillion yuan by the end of June from 29.05 trillion yuan at the start of the year, according to official data.

Off-balance sheet entrusted loans, in which a bank acts as an agent to facilitate a loan between two businesses, fell for the first time in nine years in April, when they totaled 13.82 trillion yuan. The latest data from July shows that the balance of entrusted loans has fallen further to 13.81 trillion yuan.

By the end of June, total loans in the banking industry stood at 123.5 trillion yuan, an increase of 13.2% year-on-year. This was 1.7 percentage points higher than growth in bank assets during the same period. It was the first time this has happened since 2015.

New loans increased by 8.8 trillion yuan during the first half of the year, representing 80.9% of the increase in total assets during the same period, according to CBRC data.

In the second half of the year, the banking regular will continue to steadily bring under control interbank transactions, unnecessary leverage and off-balance sheet transactions, while minimizing the impact of new regulations on the economy, Xiao said. It will take time to unwind the risks, he added.

“There are interbank transactions in wealth management products and vice versa, while off-balance sheet transaction sometimes contains both,” Xiao said.

Banking regulators and even the banks themselves find it difficult to clearly identify the underlying assets and the bearer of risk in some cases.