By Hou Wen and Song Shiqing 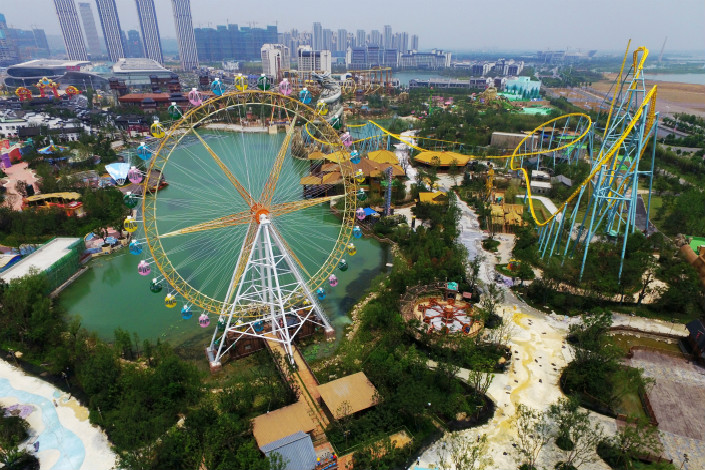 Dalian Wanda Group, the Chinese real estate conglomerate, announced a string of investments in cultural tourism projects around China. Those projects, which all received strong government support, include a $22.5 billion investment in Chongqing. Above, a Ferris wheel towers above Wanda Cultural Tourism City in eastern China’s Anhui province in August 2016. Photo: IC

Wanda has invested heavily in theme parks and tourist attractions over the past five years. In 2015, it announced a string of similar investments in cultural tourism projects in a number of Chinese provinces. Those projects, all under strong government support, include 150 billion yuan ($22.5 billion) investment in central Chongqing municipality and 130 billion yuan in eastern Shandong province, according to its official website.

Wanda Chairman Wang Jianlin met with Gansu’s top officials on Friday. Currently, the conglomerate has four shopping plazas in Gansu province. It plans to expand by building 10 more plazas in the province, Wang said during his meeting with Tang Renjian, Gansu governor, and Lin Duo, provincial party secretary. But Wang didn’t disclose the amount of the investment, according to local newspaper Gansu Daily.

The Gansu provincial government will do its best to provide services and support for Wanda’s upcoming projects, Lin said, adding that he hopes Wanda could visit Gansu more often and look for more tourism-related cooperation opportunities.

Chinese companies have been eager to develop tourist villages and other attractions to cater to growing demand from China’s booming middle class. These projects often receive strong support from local governments and also capitalize on brands that are well known to many Chinese.

Wanda’s investment in Gansu also follows its move to pay down its heavy debt by selling assets to other investors. Earlier this month, it sold a controlling stake in its 13 theme parks and other cultural projects to developer Sunac China while retaining rights to park management and operations.

Wanda has a large amount of cash on hand after the 63.17 billion yuan ($9.34 billion) deal, and will accelerate its development in cultural projects, a source at Wanda told Caixin. But it is not clear whether it will fund those projects in Gansu by itself or through partnerships with other investors, the source added.