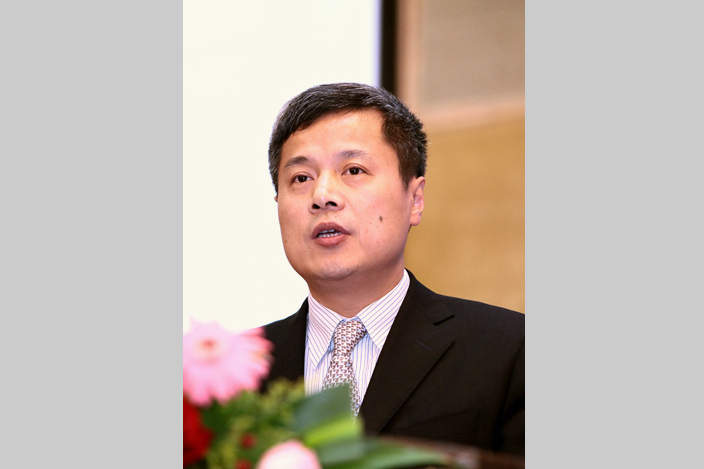 Lin Xiaoxuan (pictured in Beijing in 2010) is a senior executive at China Minsheng Bank who is now targeted in an anti-corruption campaign. Photo: IC

(Beijing) — A senior executive at China’s largest private bank China Minsheng Bank has become the latest target of an anti-corruption campaign that has brought down several regulatory officials and executives in the financial sector.

Lin Xiaoxuan, the chief information officer of Minsheng since February, has been placed under investigation for “serious disciplinary violations” said the Central Commission for Discipline Inspection (CCDI), the top graft buster, on late Tuesday. The phrase is often used to refer to corruption.

Several sources close to the matter told Caixin that investigators targeted Lin for his suspected role in cases involving other financial institutions he worked for before joining Minsheng. Lin has been prohibited from leaving the country since June, sources said.

Minsheng, listed in Shanghai and Hong Kong, said in a Tuesday statement that the bank’s operations remain normal. A bank executive told Caixin that the bank hasn’t decided who will take over Lin’s job.

Lin, 52, joined Minsheng in January and was appointed as the bank’s chief information officer in February. Lin’s appointment won approval from the China Banking Regulatory Commission on Aug. 15. He had been an executive vice president of the Agricultural Bank of China (ABC), the country’s third-largest state-owned lender, beginning in June 2016.

Lin resigned from ABC in December. The bank in a statement at the time praised Lin’s contribution in pushing forward the development of ABC’s technology system and internet-based business, as well as customer services and credit card business.

Sources close to Lin said he joined Minsheng to oversee the bank’s technology and internet finance development, similar to his job at ABC.

Before joining ABC in 2016, Lin had worked in the Industrial and Commercial Bank of China, the largest lender, for 26 years, rising to the positions as the head of the bank’s information technology department and chief information officer.

Born in Fujian province in 1965, Lin graduated from East China Normal University in Shanghai with masters’ degree in engineering.

Lin is the latest senior financial figure to fall from grace as China has stepped up a crackdown on suspected misconduct in the financial sector alongside efforts to contain financial risks. On Aug. 1, Yang Jiacai, former assistant chairman of the China Banking Regulatory Commission, was expelled from the Communist Party and dismissed from public office. Yang, who fell under investigation in May, was accused of corruption and abuse of power to forge deals in return for favors, and “sabotaging market orders and political environment of the financial system,” according to the CCDI statement.

In late July, former senior securities regulator Zhang Yujun and Yao Gang were both expelled from the party for corruption charges.