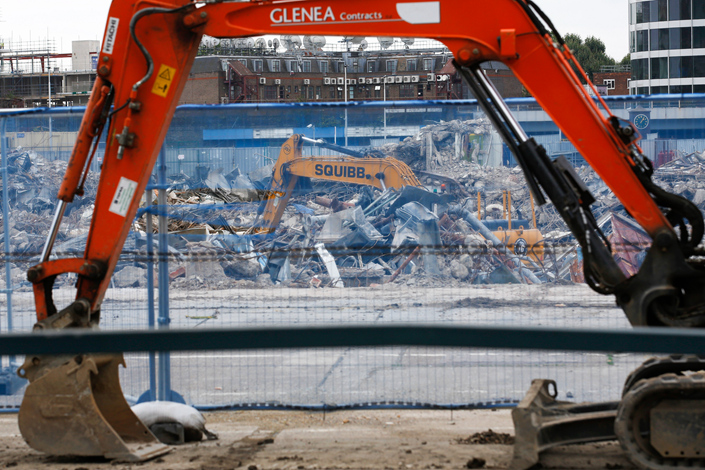 Wanda Group, China’s largest commercial property company, has pulled out of a $606 million deal to buy a plot of land in London amid Beijing’s clampdown on overseas real estate investment.

Wanda said on Tuesday it had dropped plans to buy Nine Elms Square, a 10-acre high-end apartment project in southwestern London. Birmingham, England-based St. Modwen Properties had agreed in June to sell the site to Wanda.

Shortly after Wanda’s announcement of the exit, two other Chinese developers, Guangzhou R&F Properties and CC Land Holdings Ltd., said they will replace Wanda as buyers of the Nine Elms land.

A property industry analyst told Caixin that Wanda dropped the London deal mainly because of concerns over regulatory hurdles and capital control.

The State Council, China’s cabinet, issued guidelines on Friday to limit overseas investment in property, hotels, entertainment, sports clubs and the film industry, and vowed to punish firms that violate those rules as the central government continues seeking to contain risky and debt-driven investments.

In the face of mounting scrutiny, Wanda Chairman Wang Jianlin told Caixin last month that the group will change its business strategy and switch its investment focus to domestic markets. Wanda last month sold 77 hotels to R&F Properties and a 91% stake in its 13 theme parks to Sunac China Holdings as part of its strategy to switch to an asset-light business model.

As one of China’s most aggressive overseas buyers, Wanda has spent about $20 billion over the past five years on foreign assets that include theater chains and a yacht-maker.

Wanda still owns the nearly $900 million One Nine Elms complex being developed on the south bank of the River Thames. The complex, in southwestern London, includes two high-rise apartment buildings, retail space and the first Wanda Vista Hotel outside of China.

According to Wanda’s annual report, the company started a pre-sale of the residential portion of the complex in 2014 and had pre-sold approximately 69% of the apartments at the end of December.

Both R&F Properties and CC Land have invested in assets in London. R&F in April agreed to buy the Vauxhall Square development in central London for about 158 million pounds ($203 million). A month earlier, CC Land bought the Leadenhall Building — the tallest building in London and popularly known as “the Cheese Grater” — for 1.15 billion pounds from British Land and Oxford Properties.