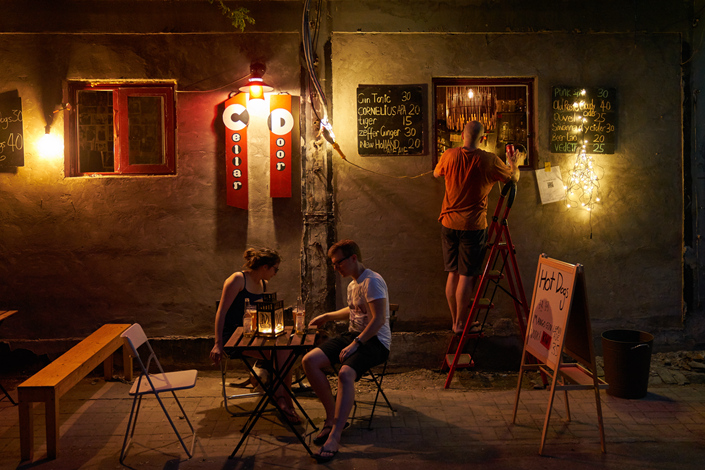 A customer buys a drink through a small window in the Cellar Door pub in Fangjia Hutong in downtown Beijing. The pub, which is popular among expatriates and tourists for its cheap drinks, recently had its door walled up as part of a Beijing government crackdown on illegal construction, including doors and windows that were added for business purposes. The city government plans to wall up or demolish about 16,000 such places this year. Still, businesses such as the Cellar Door continue to operate. Photo: Liang Yingfei/Caixin

(Beijing) — Tourists and urban explorers searching for rakish boutiques, bars and restaurants hidden in the narrow alleyways of Fangjia Hutong in downtown Beijing have been disappointed to see many of their favorite haunts get bricked up.

Like most of these alleyways in Beijing, known as “hutong” — many of which date back to the 13th century — Fangjia Hutong has been undergoing a face-lift since the spring as part of a municipal government cleanup campaign to remove unauthorized structures, building additions and storefronts.

Fangjia Hutong was once a magnet for visitors and small businesses with character. With its classy cocktail bars, vintage stores and open-air barbecue joints, the tiny street tucked away in a traditional downtown neighborhood has won fame as a symbol of the charm of Beijing. It’s a place where people can explore modern culture while surrounded by history.

Ever since China started its transition into a market economy and encouraged private entrepreneurship, small businesses have thrived in the city’s old neighborhoods and street corners. Many of the shops were opened inside traditional courtyards by modifying the original buildings, adding structures and cutting new entrances in walls — a practice known in Chinese as “opening a hole in the wall.”


Since the old factory at No. 46 in Fangjia Hutong was renovated into a complex of bars, restaurants and theaters in 2008, many residents there have cut windows and doors into their walls to turn their ground-floor homes into street-side businesses, transforming the neighborhood into a well-known leisure spot.

But a crackdown on illegal construction this year has put Fangjia Hutong in the crosshairs. Authorities said the building modifications can be dangerous, as they often alter a building’s structure or block sidewalks and fire-escape routes. Since March, more than 90 unauthorized buildings and entrances in Fangjia Hutong have been demolished, official documents showed.

According to Beijing officials, the demolition of Fangjia Hutong and similar places around the city is part of a wider plan to sanitize the city and protect its ancient architecture. Officials said they want to restore Beijing’s original appearance, characterized by winding alleyways and courtyards, after decades of modernization campaigns that have torn down most of the city’s ancient neighborhoods to make way for upscale office buildings and skyscrapers.

Wu Yamei, a city planning official at the municipal government, said Beijing will map out eight areas in the central urban districts for designated renovation and protection to “restore the appearance of the hutong and streets” to how they looked in the 18th and 19th centuries.

According to the Beijing government’s plan, the work will take three years. By 2019, the planners said, they will make sure all streets and alleys are free of illegal storefronts.

But the demolition campaign has sparked controversy. A photo collection of more than a dozen popular hutong cafes, bars and restaurants, whose doors and windows have been bricked over during the crackdown, went viral online and fueled discussion about the right ways to protect Beijing’s old neighborhoods.

“Look at the walls,” said a Fangjia Hutong resident, pointing at the gray walls where doors and windows had been bricked over. “It is so ugly, with patches everywhere.”

Local residents had mixed feelings about the government’s plan. Affected shop owners complained about how the suddenness of the crackdown gutted their businesses. But other residents have applauded the government actions for making their neighborhood quiet again. Others griped about losing rental income or the greater inconvenience that came with the loss of the local corner store.

“There will be no interesting places to go in Beijing,” said a hutong fan who fears Beijing is losing its diversity and charm as the small shops, bars and cafes disappear.

The government’s intentions for the cleanup campaign are good, said Nicole Chen, owner of the artsy boutique NC Space in Fangjia Hutong. However, the campaign lacks clear implementation standards to ensure the neighborhood’s environment will be improved.

NC Space in late July organized an exhibition named “Eye-Dotting the Dragon,” which invited artists, designers and hutong-lovers to paint their favorite facades of stores at Fangjia Hutong with creative designs on canvas.

Xiang Ting, the exhibition’s director, said the cleanup campaign is a major blow to the business and culture of Beijing’s many hutong. But as the cleanup unfolds, people need to think about how to adapt to the changes.

The exhibition will leave a record of the neighborhood’s changing landscape, Xiang said.

Many people cherish the long, winding hutong as an indispensible part of Beijing, said He Linghua, an urban planner at the China Academy of Urban Planning and Design in Beijing. Policymakers should clearly define the function of different urban areas to properly guide renovation and business development in the many hutong. And the people in charge should find a fair solution that benefits most ordinary people.

City officials said urban planning and environmental improvement efforts will follow the demolition and bricking up, which are just the initial stage of the city’s plan to restore the old neighborhoods. The government will collect and consider public comments regarding the future planning of hutong, said Wang Xin, director of the Andingmen street community office, where Fangjia Hutong is located.

According to Wang, the Andingmen street community is planning to build a complex that includes grocery stores and public facilities to meet the daily needs of hutong residents. Wang added that different hutong in the area will be given different zoning classifications, such as tourism, commercial and residential.

But some hutong store proprietors said they are concerned that the rigid zoning may restrain the natural vitality of their businesses. Hutong are complicated ecosystems of residents, business owners and visitors that naturally maintain a delicate balance. There is no one-size-fits-all approach that can be applied to managing hutong, said Ye Zi, a Taiwan native who runs a cafe in Fangjia Hutong.

Despite the cleanup, some business owners have tried to stay open. The Antlers Bar in Fangjia Hutong, whose unsanctioned glass entrance facing the alleyway was shuttered in June, has opened a new door inside the neighboring restaurant and has continued to welcome customers lured by its famous burgers and beers. Other shops have asked their customers to enter through windows or have found openings for alternative entrances.

The owner of a barbecue restaurant near Fangjia Hutong, who grew up in the neighborhood, decorated her small restaurant in a nostalgic style. She said she loves living in the hutong because it reminds her of her childhood. However, if she can’t sustain her business, she will have to move out and find another way to earn a living.

“It will be such a shame if there are no more of the hutong’s characteristic boutiques,” Xiang said.