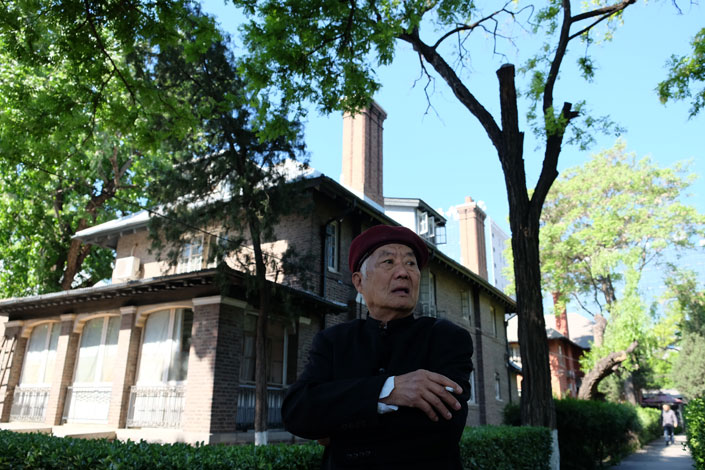 Li Zhengrong, 74, stands in front of one of the buildings of the quarters for doctors and nurses who work at one of Beijing’s oldest hospitals, the Peking Union Medical College Hospital, which was built by the Rockefeller Foundation in 1921. Photo: Wu Gang/Caixin

(Beijing) — Deep in the heart of one of Beijing’s old neighborhoods, Li Zhengrong, a chain-smoking septuagenarian leading a group of travelers, stands apart from the armies of Chinese pedicab-rickshaw drivers and Western guides who often haunt these historic back alleys.

Li, 74, calls himself a “self-taught folklore scholar” and often conducts walking or cycling tours of Beijing’s centuries-old courtyard homes, or “siheyuan.” They are found in a maze of narrow streets, or “hutong,” that are chock-full of cheap dumpling shops, stalls selling barbequed lamb skewers, gossipy grandmothers, and communal bathrooms.

Li said he started researching the history of old homes in the Chinese capital nearly 15 years ago after retiring from his day job as an electrician and elevator repairman.

This was the time that the municipal government was razing old neighborhoods — some dating back more than 400 years, to the Ming Dynasty — to make way for skyscrapers and shopping malls in a headlong rush to win and then prepare for the 2008 Olympics.

“Back then, people were leaving courtyard houses without heating or plumbing faster than the rats infesting the shared toilets,” Li said. “This was long before tourists on electric tricycles started choking the alleyways and it became trendy to live in spruced-up courtyard homes.”

Today, these traditional neighborhoods are home to a mix of elderly residents, foreigners on a quest for “character,” wealthy nostalgic hipsters, and rural migrants who sleep in the backs of their 10-foot noodle shops

There are contradictory figures on how many old courtyard homes are still standing today. “In the early 1980s, the Beijing Institute of Traditional Architecture counted over 6,000 courtyard homes, and nearly half of them were preserved in their entirety,” said Tan Liefei, deputy director of Beijing’s Local Chronicles Compilation Committee. “But by the end of 2012, only 923 of them remained intact.”

More hutong neighborhoods were destroyed between 1990 and 2005 than the total number razed during the 40 years from 1949 to 1989, according to a collection of essays titled Beijing Siheyuanzhi, published last year by Tan’s team.

The first courtyard homes appeared soon after Kublai Khan swept across China and moved the capital of the vast Mongol empire to present-day Beijing nearly 800 years ago. They are quadrangle structures, with the main elevated living quarters for elders in the north flanked by two connected side wings for children opening into an inner courtyard, and an elaborately carved screen wall to ward off evil spirits and divide the area from the servants’ quarters in the outer yard.

The government survey counted only homes where these signature architectural characteristics were intact. But according to the Beijing Cultural Heritage Protection Center, a non-governmental organization, there were nearly 1,000 hutong in the city, with nearly 30,000 old homes in various states of disrepair, by the end of 2014.

Although the demolition frenzy has died down in recent years, the old customs, folk traditions and even the language heard in the alleyways of old Beijing were slowly disappearing as rich outsiders buy up these homes near the city center, Li said. And that is what prompted him to pick up his bicycle and start giving tours to university students and anyone else who would listen to his stories. His business card says, “I use humorous puns from the old Beijing dialect to tell visitors about the folk history of the capital.”

“Do you know why the daughters were always given rooms in the east wing?” Li asks. “It was part of Chinese word play. Daughters had to leave home after marriage and the word for ‘east,’ ‘dong,’ was echoed in the word for being in motion, or ‘dongliu.’ ”

Beijing’s old architecture mirrored the rigid social hierarchy in Confucian societies. The number of steps leading up to a house, the size and patterns on the guard stones on either side of the entrance, the number of poles to hang lanterns above the main gate and even the art on the roof tiles all signified the wealth and status of an individual, according to Li.

A good example of this is one of the residences of old Beijing warlord Zhang Xueliang. Zhang ruled over Northeast China from 1928, and is best known for kidnapping Kuomintang leader Chiang Kai-shek in 1936 and forcing him to form a wartime alliance with the Chinese communists against invading Japanese forces. Zhang’s home, with its wide entrance to allow a horse-drawn carriage to pass through, big guard stones carved with lions and clockwise swastikas — a Buddhist symbol for good fortune — on the awnings of the roof all hinted at his power. Today Zhang’s descendants continue to live there, Li said.

“Most of the information I have collected comes from firsthand accounts of people who have lived in these old neighborhoods,” the amateur historian said.

His narrow, 15-square-meter home in the Bada Hutong area, a few kilometers south of Tiananmen Square and famous as the Ming and Qing dynasties’ red-light district, is crammed with history books and hand-copied notes on the architectural details of old buildings. Yellowing clips from old newspapers calling him “an exceptional hutong history specialist,” and columns he has written for papers on old Beijing folk customs spill out of a folder on a corner table. “I used to write for several home appliance publications earlier, including the popular Chengdu Dianzibao,” he said. “Now I focus on culture.”

Li also spends hours poring over the Beijing municipal archives, which hold more than 1.7 million pieces of information, including research papers, news clippings, government records, film and photos. “There are over 3,600 old files related to the history of hutong from the period before the People’s Republic of China was founded in 1949,” he said. “And one of my favorite pastimes is to look at old residence records to see who lived where.”

But modern tools such as the internet are beyond the reach of this self-proclaimed Luddite, who refuses to carry a cellphone. He often chides young visitors, saying, “Your noses are buried in phones, and eyes glued to computers, … but you are slow on your feet and even slower in your heads!”

Li said he knows most of the alleyways in Beijing like the back of his hand. And many of the old residents have become his friends.

At No. 11 Nanjixiang Hutong, one of the back-alley neighborhoods in the Dongsi area, an elderly woman invites him to look at engravings on a wall in her home and an old painting on a thick wooden pillar supporting her roof.

“I first thought the marks were painted on the wall,” the woman, Lei Yuzhen, said. “But recently my son said, no, the symbols are engraved on the wall. But I don’t know what they mean.”

Li is unable to shed any light on the markings, but he explains that the now-blackened paint used for the mythical creature with a head of a lion and dragon feet on her pillar came from lacquer trees in Yunnan province. “Once there was a shop in Zhushikou (in central Beijing) that used to make these traditional paints,” he said.

It is these rare nuggets of information that has made this self-taught historian a popular figure in the back alleys of the city. “Even pedicab rickshaw drivers who bring tourists come to learn from me, and I have assisted two professors from Shantou University research Beijing’s folk history,” Li said. “And I have been invited to talk about old Beijing architecture at several primary and middle schools.”

But now the gentrification of the hutong areas is threatening to push out elderly residents like Li.

In 2005, the government announced plans to stop tearing down old neighborhoods and instead started investing about 500 million yuan (about $60 million at the time) each year to renovate dilapidated courtyard homes. About 340,000 families were relocated after the Overall Urban Plan of Beijing 2005-2020 was announced, according to government data. But once renovation was completed, many of the original residents couldn’t afford to move back.

A 230-square-meter siheyuan near downtown Beijing had an asking price of about 19 million yuan even before renovation in 2015, and it went up to about 25 million yuan after its face-lift, data from Beijing Shun Yi Xing Real Estate Brokers Ltd. showed. The proximity of some of these neighborhoods to top schools in the capital has pushed up prices even further.

And this rapid gentrification means that old ways of life like mahjong clubs are being replaced by Western-style bars and art studios. In neighborhoods that haven’t been renovated, old residents still pay a nominal rent of 4 yuan (58 U.S. cents) to 5 yuan a month to the municipality, Li said. Many of them have no ownership deeds or rent agreements, but their families have been living there since the 1950s and 1960s, when the original owners were chased out and the siheyuan were carved up and given to party members and factory workers for communal living.

Even historic buildings, including the one that housed the East Depot, the feared Ming Dynasty spy agency run by a powerful eunuch named Wei Zhongxian, has now been turned into a maze of cement shacks by these tenants.

Lifting the Veil of History

While Li is fond of taking his groups to the homes of old Beijingers, he also doesn’t shy away from more controversial sites. One of the places he shows visitors is No. 6 Fuqiang Hutong, where former Communist Party chief Zhao Ziyang was said to have been under house arrest for 16 years. Zhao was one of the pioneers of China’s three-decade economic miracle, pushing to open up the “gold coasts” of Guangdong, Fujian and Zhejiang provinces for export manufacturing. He lived in this nondescript courtyard home until his death in 2005 at the age of 85, according to Li. It can be easily missed by an untrained eye, and only the back wall with barbed wire and an abandoned watch tower remain as clues to its past.

Just opposite the back wall of No. 6 is the former home of Lao She, who many thought would be the first Chinese writer to win the Nobel Prize in literature, but instead met with a tragic end. He was known for works such as Rickshaw Boy and Teahouse, a sprawling social commentary of one Chinese family from the late 19th century to the momentous year of 1949. But at the start of the Cultural Revolution in 1966, Lao was paraded through the streets of Beijing and beaten in public in front of the Temple of Confucius by the Red Guards. A day later, “he committed suicide by drowning himself in Beijing’s Taiping Lake,” Li said. “But three bodies were recovered, and no one could identify which one was his.”

The Chinese language has a word for the people like Li whose names don’t make it into the history books — the “Laobaixing,” or “old 100 names,” Li said. “But we have witnessed history and have inherited our community’s folk memory. And that memory must not disappear.”