By Li Yuqian and Fran Wang 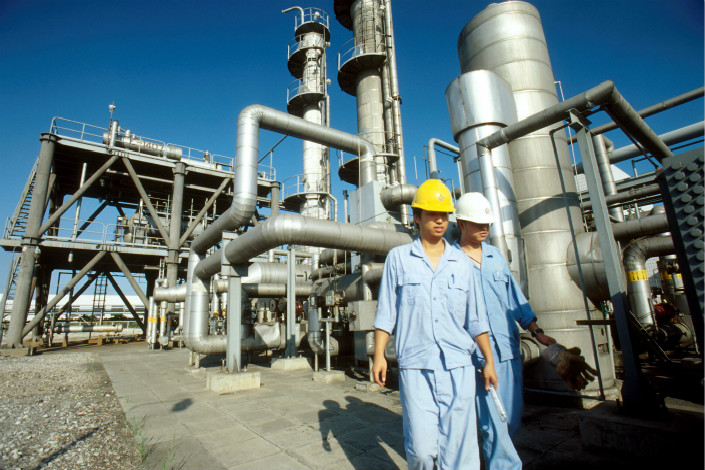 Economists who say that China is about to launch a "new cycle" of expansion say the government’s supply-side reform campaign and a prolonged slump in the producer price index have paved the way for a new wave of industrial expansion. Above, workers are seen at the China National Offshore Oil Corp. refinery in Tianjin in 2012. Photo: IC

(Beijing) — Economists are at odds over whether China’s ongoing growth slowdown is yielding to a “new cycle” period of expansion.

The debate has heated up due to a recent rally for commodity prices in the face of apparent softer demand, which was underscored by disappointing economic activity data for July.

Supporters of the new-cycle argument, led by Ren Zeping, chief economist at Founder Securities, contend the government’s supply-side reform campaign and a prolonged slump in the producer price index (PPI) — a gauge of prices at the factory gate — have paved the way for a new wave of industrial expansion.

The campaign and 54 months of negative PPI growth until August last year have successfully cut excess industry capacity. As a result, industrial profits are up, and company balance sheets have been shored up, they noted.

The government started trimming excess capacity in the steel and coal industries in 2016 after prices tumbled, plunging companies, many of them state-owned, into deep losses and increasing their risks of bank loan and bond defaults. Similar capacity-cutting is now underway in other sectors, including the aluminum, cement and glass industries.

Countering the expansion cycle argument, however, are economists who caution that the rebound for upstream industrial profits and product prices — mainly driven by the government’s supply-side squeeze — has put more pressure on downstream sectors. The result, they say, is that downstream companies have found their investments and expansion abilities constrained.

Given that China’s economic growth relies heavily on investment in infrastructure projects and property development, the new cycle naysayers maintain, it’s simply too early to call the current environment a manifestation of a new, expansionary leg of the nation’s economic cycle.

“It’s not the starting point of a new economic cycle looking from either the short, medium or long term,” argued Li Xunlei, chief economist at Zhongtai Securities.

Indeed, Li said, any capacity expansion would be difficult now, based on the government infrastructure spending spree over the past few years. A bottoming-out is a long way off as economic growth has yet to emerge from a long period of downward pressure, he said.

Bolstering Li’s argument are results from a survey of companies released in August by Tianfeng Securities. It found many midstream companies, whose profits have been rising in recent years, remained reluctant to step up fixed-asset investments after years of excessive capacity expansion.

Rather, survey respondents said their companies spent the proceeds of their profits on research, mergers and acquisitions, or stakeholder dividends.

In the paper-making industry, for example, combined company profits surged to 4.6 billion yuan ($694 million) last year from 400 million yuan in 2013. But capital expenditures declined to 6.8 billion yuan from 9 billion yuan over the same period.

“The campaign to cut overcapacity has made important progress,” Wang Tao, an economist at UBS, told Caixin. ”But excess capacity has yet to be completely eliminated.”

Wang said the Chinese economy’s recent pickup — marked by a stronger-than-expected 6.9% gross domestic product growth rate for the first half of this year, compared to 6.7% for all of 2016 — was partly supported by demand underpinned by government infrastructure spending and the property market. But she said all signs are pointing to declines for these sectors, which traditionally supported China’s growth.

Now, Wang said, the supply-side reform campaign should take aim at debt-laden, money-losing “zombie” companies as well as improving the efficiency levels at state-owned enterprises (SOEs). The goal should be to spur sustainable, spontaneous recoveries for corporate profits and investment.

Neither has the new cycle argument changed the views of Li Jiange, chancellor of Guangdong Technion-Israel Institute of Technology. At a recent forum, he expressed doubts that any changes were in store for the nation’s economic cycle. In fact, he warned that any excessive optimism on economic outlook would risk delaying efforts by the government and companies to support restructuring and upgrading the industrial chain.

At this stage of the debate, economists have been offering different interpretations on what a new cycle is.

A research team at the Development Research Center of the State Council, China’s cabinet, has attributed the nation’s six-year growth slowdown to structural shifts in the so-called gross final products — or final demand — that do not directly contribute to a subsequent round of production.

Zhu Baoliang, a senior analyst with the government-linked think tank State Information Center, has a similar view. “Final demand has not entered a new cycle,” he said.

Growth in the country has stabilized because companies started restocking and the soaring exports from China were tied to the better-than-expected global economic recovery. But it’s unclear whether this stability can be maintained, Zhu said.

Yet new-cycle proponent Ren of Founder Securities said his argument is based on an analysis of what he called the “capacity cycle,” also known as the “Juglar cycle,” which is an eight- to 10-year economic wave based on levels of investment in physical assets such as machinery and technology.

Urban fixed-asset investment in the purchase of equipment and industrial equipment increased by 7.1% year-on-year in the first seven months of this year, accelerating from the annual growth rate of 2.1% in 2016 and the first pickup since 2008.

Ren expects the uptick in equipment investment marks this new cycle, and that this capacity growth will usher in cyclical changes affecting the overall economy, which will lead to the economic growth rate bottoming out in 2019.

“China’s excess capacity cut has come close to the end,” he said. “Capacity investment expansion may come in 2019.”

As of the end of May, the steel industry had achieved 84.8% of its cutback target, according to government data. Moreover, China Iron and Steel Industry Association-member companies reported 53.2 billion yuan in combined profits for the first half of this year, more than quadrupling what they made during the same period last year, the news outlet Economic Information Daily, owned by the official Xinhua News Agency, reported Monday.

For the coal industry, 85% of this year’s capacity cut target had been reached by the end of July, according to the China National Coal Association. Coal mining and coal washing companies posted combined profits of 171.4 billion yuan in the January-through-July period, according to official figures, nearly 12 times the level earned in the same period last year.

Nonetheless, government figures show manufacturing investment has been sluggish so far this year, increasing only 4.8% year-on-year in the January-through-July period compared to rates exceeding 20% annually before 2013.

And Li of Zhongtai Securities said that although overcapacity cuts have slowed the pace of a slowdown in the industrial sectors, it cannot reverse their downward momentum. Only after their market hits bottom might there be a turnaround, he added.

In the opinion of Shen Minggao, chief economist at GF Securities, no new cycle can possibly emerge before three conditions for the Chinese economy have been met.

The first condition, Shen said, is that excess capacity must be completely eliminated to set the stage for sustainable economic recovery. Secondly, the government must further reduce market controls in order improve resource allocation efficiency. And thirdly, he said, new growth drivers must replace the nation’s traditional engines and lay the critical groundwork for the next economic wave.

Liu Shijin, a vice chairman at the government-affiliated China Development Research Foundation, has called for cultivating new growth drivers by opening up to competition what are now monopolized industries, such as the energy sector, as well as speeding up service sector development and tapping technologies such as the internet to optimize resource allocation.

An earlier version of this story provided an incorrect definition of the producer price index.