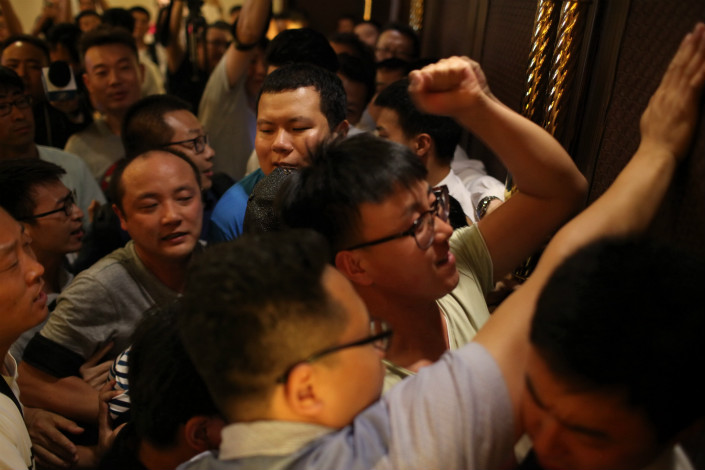 LeEco attributed its first-half loss to bad publicity and a tarnished brand, which in recent months has led to a “fluctuation in user loyalty.” Above, LeEco creditors gather at the registration area of the company's extraordinary general shareholders meeting in Beijing on July 17. Photo: IC

The woes of cash-strapped LeEco seem set to continue, as listed unit Leshi reported significant losses for the first half of the year.

Although it was the first red ink in the seven years that the company has been public, it comes after a year of mounting debt, complaints from unpaid workers, and the ouster of the firm’s ambitious founder, Jia Yueting.

Leshi — the publicly traded video-hosting arm of LeEco — reported a loss of 637 million yuan ($96.1 million) in the first six months of 2017, according to an earnings report published Tuesday on the Shenzhen bourse.

The company attributed the loss to bad publicity and a tarnished brand, which in recent months has led to a “fluctuation in user loyalty” as well as a substantial drop in advertising and subscription revenues.

The average number of unique daily visitors to Leshi’s video-streaming site — which faces tough competitors such as iQiyi, Tencent Holdings Ltd., and Alibaba Group Holding Ltd.’s Youku — fell to 57 million, down from 80 million a year earlier.

Subscription-based Leshi also said it has refrained from syndicating its programs with other hosting platforms in order to uphold exclusivity, losing out on another large source of revenue.

The news is unlikely to come as a shock to investors, who were warned of a faltering performance in a forecast in July. The industry has also watched LeEco’s longer-running problems unfold, with widespread reports of disgruntled creditors storming the firm’s headquarters, the canceling of scheduled sports events, and mass departures of employees and executives.

Leshi spent nearly 26 million yuan on severance packages alone in the first half of this year, according to an earnings report, and laid off staff in a range of divisions, including its U.S. office, news reports said.

Since February, new investor Sunac began striving to reverse the unchecked ambitions of founder and former Chairman Jia, whose goals have stretched affiliates to their limits.

Since 2014, Jia has devoted resources to creating a sprawling entertainment ecosystem with hardware, programming, and self-driving cars at its center — aspirations that have burned a hole in LeEco’s pocketbook.

“Jia can pursue whatever he wants with the car business,” Sunac Chairman Sun Hongbin said during a news conference in May. “As for the rest, what must be sold will be sold.”

In July, Jia resigned from all executive posts at the listed arm but currently remains the largest stakeholder, with 26% ownership. However, 99% of his shares were frozen by a Shanghai court that same month.

Relieved of nearly all his duties at LeEco, Jia is devoting his energies to building his own futuristic carmaker, LeSee, and pushing forward Faraday Future, a Silicon Valley smart-car startup he strongly backed.

But even as streamlining continues, the company still may be at risk.

Leshi recently revealed that it has been involved in 33 lawsuits over the past 12 months in cases involving a total of 30 million yuan.

It also acknowledged potential problems that could exacerbate the cash squeeze. Foremost are banks wary about giving Leshi further loans. But concern also stems from LeEco affiliates, which are having trouble repaying cash infusions from Leshi.

Leshi shares have been suspended since April pending a major announcement.