By Sun Congying and April Ma 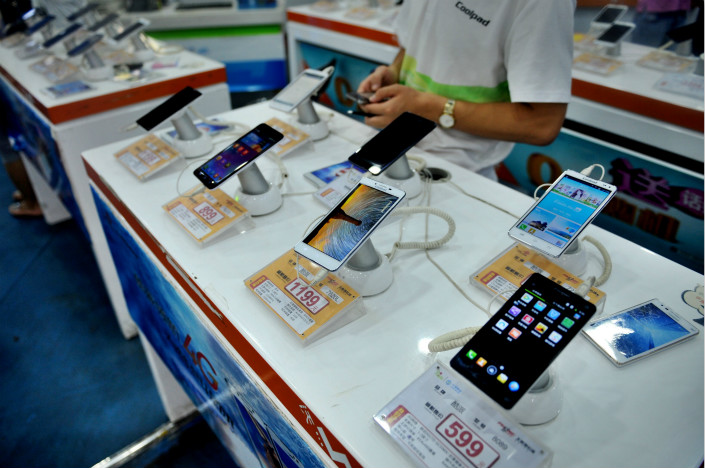 Liu Jiangfeng has given up his job as CEO of Chinese smartphone-maker Coolpad Group Ltd. for personal reasons. Above, the brand’s smartphones sit on sale in the northern city of Taiyuan, Shanxi province, in September 2014. Photo: IC

The CEO of flagging Chinese smartphone-maker Coolpad Group Ltd. has resigned, a year after he was hired at the behest of LeEco — the company’s largest shareholder and cash-strapped tech giant.

Liu Jiangfeng — who last year pledged to return Coolpad to its 2015-level glory — resigned due to personal reasons, according to a company announcement Thursday on the Hong Kong Stock Exchange.

Liu will be replaced by Jiang Chao, who was formerly an executive on Coolpad’s board.

LeEco first became a major stakeholder of Coolpad in 2015, and boosted its stake to 29% last year, becoming the phone-maker’s largest shareholder.

A representative for LeEco who is on Coolpad’s board has been reassigned as a nonexecutive director.

Liu, who once served as the head of Honor, one of Huawei’s handset brands, was appointed Coolpad CEO in August 2016, less than two months after LeEco increased its stake in the company.

Liu was the personal choice of LeEco founder Jia Yueting, sources told Caixin, and Liu has stated he joined Coolpad because he was inspired by Jia’s ambitions to create a content and connected-device empire, with the cellphone as a critical component.

Though Coolpad did not brand its devices with the LeEco logo, the tech giant was confident that their partnership would go far. It set a goal to sell more than 10 million phones each year before the end of 2018, and put Coolpad — at one point one of the most promising smartphone brands in China thanks to large contracts with telecom operators — back on top.

But the comeback envisioned by Liu did not materialize. In November, three months after he declared his goals, LeEco’s aspirations began to unravel.

That month, Jia confessed that LeEco, which began as a subscription-based video-hosting site, had spread itself too thin by engaging in cash-burning businesses such as car building and smartphone production.

Coolpad then issued a performance forecast, warning investors that it expected to file a loss of nearly HK$3 billion ($380 million).

But the company has still not revealed the actual extent of its losses. It repeatedly postponed publishing its 2016 financial results — which were due for release in March — citing auditing issues. Company’s shares, which have lost over 60% their value from a year ago, are to remain suspended until the financial figures are released.

As LeEco offloads capital intensive and ill-profiting ventures, Coolpad’s troubles deepen. Coolpad predicted mounting losses for the first half of 2017, estimated red ink of HK$600 million to HK$800 million, a glaring contrast to 2015, when it posted over HK$2 billion in profit, more than triple that of 2014.

The struggling smartphone maker disclosed in late July that it was sued for over 80 million yuan ($12.1 million) relating to loans received from Ping An Bank, which is seeking to recover the money ahead of the due date because it “has the right to directly recover all the loans in case the operation or the financial condition of the borrower or the guarantor deteriorates.”