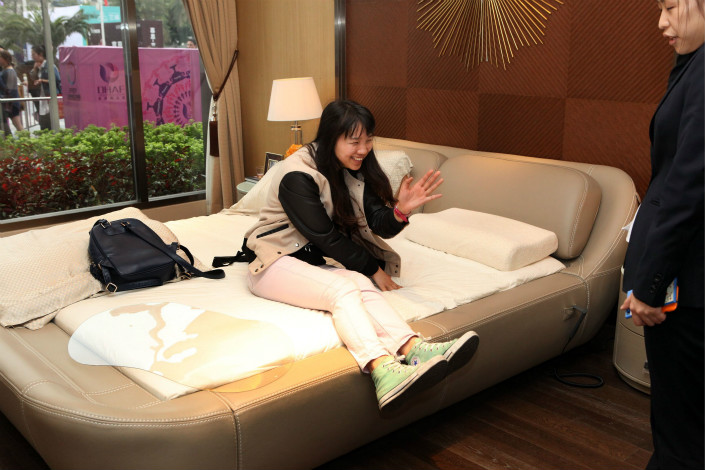 American bedding-maker Bedgear and Chinese bedding producer De Rucci Beddings Co. Ltd. have announced a partnership that De Rucci says will meet a growing demand in China for high-quality sleep environments. Above, a shopper checks out a De Rucci mattress in a store in Dongguan, Guangdong province, in March 2015. Photo: Visual China

The American bedding-maker is expanding widely into the Chinese market, opening 500 stores over the next two years, as many foreign retailers are pulling out amid fierce competition.

The tie-up will meet a growing demand for high-quality sleep environments from China’s younger generation, which has become a driver of consumption but have faced severe sleep issues, De Rucci said Friday in an online post.

More than 80% of China’s youth have sleep disorders, according to a report published jointly in March by De Rucci and the Chinese Sleep Research Society.

Bedgear will provide De Rucci consumers with one-on-one consultations to build each shoppers’ personalized sleep systems and customized products based on sleep position and body frame, the company said in an official statement.

The move is part of Bedgear’s efforts to strengthen its international presence. The 7-year-old firm has already opened specialty outlets in the U.S., Canada, Russia, New Zealand, Australia and China.

In contrast to Bedgear’s aggressive expansion to China, a string of foreign retailers has exited the once-promising China market as they struggle to remain profitable due to competition from local rivals.