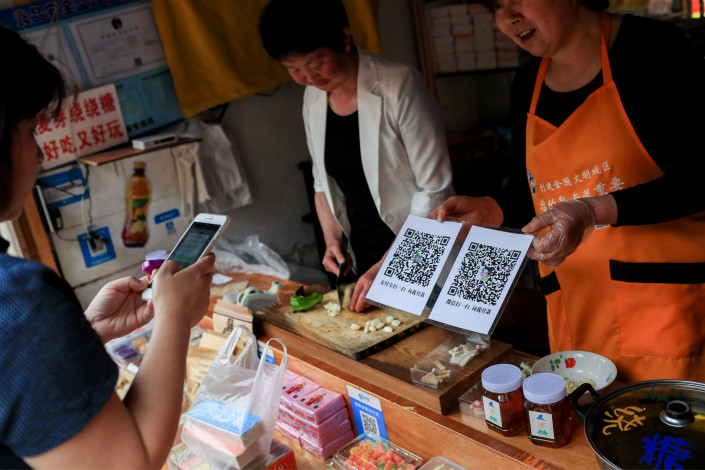 Tencent’s new service will allow users to earn interest from their WeChat balances. Above, a customer uses her smartphone on May 15 to pay at a store in Shanghai that accepts payment via WeChat and rival Alipay. Photo: Visual China

Tencent is testing a new service on its WeChat messaging app that could be its long-awaited answer to Alibaba-affiliate Ant Financial’s giant mutual fund, Yu’e Bao.

The service, Lingqiantong, allows users to earn interest from their WeChat balances. It follows in the footsteps of Yu’e Bao, a mutual fund started by Ant Financial, in 2013. Yu’e Bao’s selling point is that it offers better returns to users by investing their money in interbank deposits. Users can also withdraw their money at any time.

Some WeChat users were sent notifications on Monday inviting them to use the new service, according to multiple reports by Chinese-language media outlets. Tencent acknowledged the reports of the new service, but told Caixin that some Chinese publications had incorrectly listed China AMC as a partner for Lingqiantong.

An existing wealth-management platform integrated into WeChat, Licaitong or WeChat Wealth, came out in 2014. It offers users financial products with returns similar to Yu’e Bao’s. But unlike Yu’e Bao, WeChat Wealth doesn’t allow users to make investments using their stored WeChat balance. Instead, it requires them to pay using their bank accounts.

When making WeChat payments at places like convenience stores and restaurants, users have two options — pay using their balance on the app, or with a linked bank card.

Yu’e Bao even had to take measures to curb its own expansion in August, setting a 100,000 yuan ($15,303) limit on users’ deposits in the fund. The decision was made in March after the China Securities Regulatory Commission increased the percentage of assets that money market fund managers must set aside as a buffer.

Lingqiantong is “arguably something that was missing from WeChat for a long, long time,” Roberts said, adding that Tencent’s focus during the earlier years of WeChat’s development was on growing its user base, rather than financial products.

But while Lingqiantong can take advantage of WeChat’s enormous existing user base, it’ll have a hard time catching up with Alipay’s Yu’e Bao, which gained users at a time when interbank interest rates were high.

When Yu’e Bao first launched, it offered as much as 6.2% yields on user deposits. But falling interest rates and stricter regulations have pushed that down to below 4%.

“Ultimately interbank rates are what they are,” Roberts told Caixin.