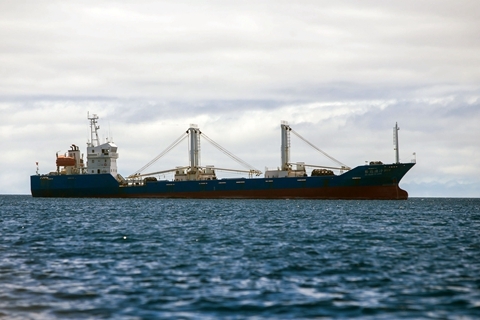 A Chinese-flagged vessel Fu Yuan Yu Leng 999 was seized by the Ecuadorian Navy in the Galapagos Marine Reserve with more than 6,600 dead sharks and other endangered species on board. Photo: Visual China.

Taiwan’s fisheries authority said Monday that the two vessels allegedly involved in a shark smuggling case in Ecuador have “no relation with Taiwan,” adding to confusion in the widely watched case.

The two boats, known as Hai Fang 301 and Hai Fang 302, were not licensed as fishing vessels by Taiwan authorities nor were they operated by a Taiwanese business, said Huang Hung-yan, deputy director-general of Taiwan’s Fisheries Agency. He said Taiwan boats haven’t carried out any fishing activities in the area.

Huang’s comments came after the two Taiwanese boats were accused of being involved in a shark smuggling case in the Galapagos Marine Reserve area. The incident led to the Aug. 13 detention of a China-flagged refrigerated cargo ship and the imprisonment of 20 fishermen on board.

The Ecuadorian authorities said more than 6,600 sharks and other endangered species were found on board the cargo ship, Fu Yuan Yu Leng 999.

According to Galapagos National Park authorities, Fu Yuan Yu Leng 999’s catch had been obtained from the two Taiwanese vessels, Hai Fang 301 and Hai Fang 302, between Aug. 5 and Aug. 7.

But reports posted by vessel tracking platform Global Fishing Watch said no record showed that Fu Yuan Yu Leng 999 had rendezvoused with any vessels named “Hai Fang” or “Hai Feng” during that period.

Instead, data from Global Fishing Watch showed that Fu Yuan Yu Leng 999 had spent 12 hours within 30 meters of four Chinese flagged-vessels during the period about 1,700 miles west of the Galapagos. Analysts said this strongly suggested that large volumes of cargo were being transferred between the ships.

Two of the four vessels were tuna long liners listed in the fishing fleet of NASDAQ-listed Chinese fishing giant Pingtan Marine Enterprise Ltd., according to a May 2017 press release about the company. Pingtan is China’s second-largest ocean fishing company. The other two vessels belong to Fujian-based Fuzhou Honglong Ocean Aquatic Products Co.

A Caixin investigation found that the Fu Yuan Yu Leng 999 is also owned by Fuzhou Honglong, whose largest shareholder is a younger brother of Pingtan Marine’s chairman.

In response to questions from Caixin, a Pingtan employee said she did not know of any relationship between her company’s boats and those of Fuzhou Honglong.