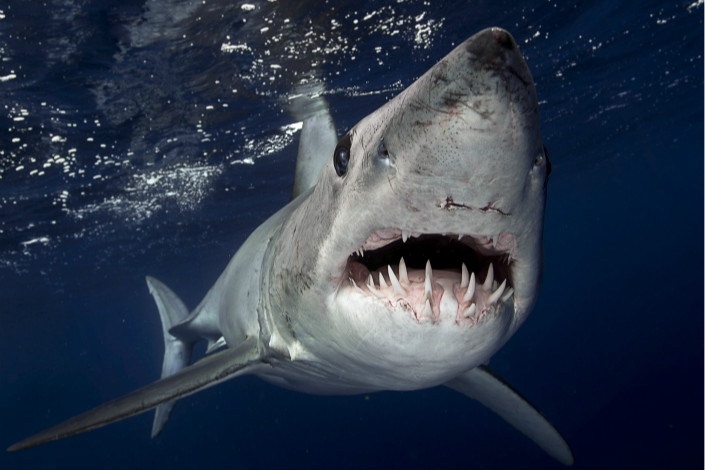 The Ecuadorian Navy seized a Chinese-flagged vessel in the Galapagos Marine Reserve that was carrying more than 6,600 dead sharks, some of which were endangered species. Photo: Visual China

A China-flagged refrigerated cargo ship that Ecuadorian authorities discovered transporting more than 6,600 shark carcasses in mid-August has been found by Caixin to have ties with China’s second-largest ocean fishing company.

Caixin had previously reported that the Fu Yuan Yu Leng 999, the ship detained by Ecuador, belongs to Fujian-based firm Fuzhou Honglong Ocean Aquatic Products Co. A further investigation by Caixin shows that Fuzhou Honglong has close links to NASDAQ-listed Chinese fishing giant Pingtan Marine Enterprise Ltd., and that the largest stakeholders of the two companies are husband and wife.

Fu Yuan Yu Leng 999 wasn’t used for fishing. It was a reefer or refrigerated cargo ship built for collecting the catch from smaller fishing vessels. It was intercepted by Ecuadorian military vessels on August 13 within the Galapagos Marine Reserve area. Catching or transporting sharks within the Galapagos Reserve is illegal.

According to Galapagos National Park authorities, 6,623 shark carcasses were found on board Fu Yuan Yu Leng 999, including some endangered species such as the scalloped hammerhead.

Illegal fishing and legal overfishing, driven in large part by demand in Asia for shark’s fin, have left more than a quarter of shark and closely related ray species endangered, according to the International Union for Conservation of Nature.

A court in San Cristobal, one of the ecologically rich Galapagos Islands, found the reefer’s 20 crew members guilty of breaking Ecuador’s Integral Criminal Organic Code by illegally transporting wildlife. They were sentenced to between one to four years in prison and fined $5.9 million.

But after the trial, many questions remained: Who had caught the massive haul of fish? And had they caught the sharks inside the Galapagos Reserve, a UNESCO World Heritage Site, or outside, where shark fishing as bycatch is legal in some Ecuadorean waters?

But reports posted after the trial by US-based environmental watchdog SkyTruth and its partner website, Google’s Global Fishing Watch, said that Fu Yuan Yu Leng 999 had not rendezvoused with any vessels named “Hai Fang” or “Hai Feng” during that period.

Caixin found Fu Yuan Yu 7861 and Fu Yuan Yu 7862 listed as vessels in the Pingtan Marine Enterprises’ longline fishing fleet, according to a May 2017 press release about the company, which is China’s second-largest ocean fishing firm.

When Caixin contacted Pingtan Marine Enterprises to ask if Fuzhou Honglong’s Fu Yuan Yu Leng 999 and Pingtan’s two longliners had any trading or transport relationship, a Pingtan employee said she did not know of any relationship between her company’s boats and the Fuzhou Honglong reefer.

The Aurelius Value report said the company and its affiliates “engage in widespread illegal fishing and poaching of endangered species.”