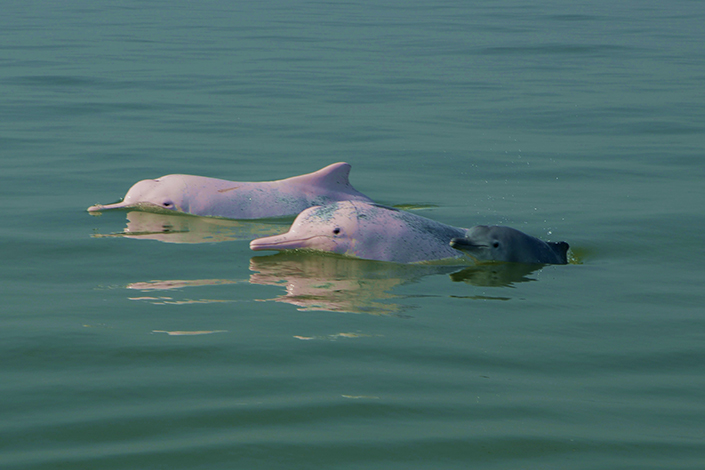 Chinese white dolphins face a threat to their habitat near Hainan, where a huge airport project is taking place without the proper clearances, an environmental group says. Above, Chinese white dolphins are seen in Sanniang Bay, Qinzhou, Guangxi province, in December 2014. Photo: Visual China

(Sanya, Hainan province) — Over a dozen large boats ferrying heavy machinery and concrete boulders crisscrossed Hongtang Bay, which has long been home to dozens of Chinese white dolphins in the balmy resort city of Sanya.

The dolphins — which turn pale pink as they reach adulthood — are an endangered species in China and just two steps away from being classified as endangered globally.

Now the largest habitat for these marine mammals on the mainland is threatened by a mega-airport project under construction in the bay without an environmental impact clearance, according to Friends of Nature, a Beijing-based green group.

At stake is also a national coral reef reserve in the island province of Hainan, activists said.

In late May, the once-crystal-clear waters of the bay had turned green, and small parcels of land reclaimed from the sea were scattered near the shoreline.

Construction at the site began in January, but the State Oceanic Administration (SOA) is still reviewing a draft environmental impact report released in late April for a monthlong public consultation, the group said. The SOA hasn’t announced a timeline for approving the study.

A panel of experts tasked with studying the environmental impact of the project has already raised red flags over the imminent threat to dolphins from the 109-billion-yuan ($16.1 billion) airport being built by Hainan Airlines, a part of HNA Group, with support from the city government.

“High-frequency noise from pumping concrete into the seabed to lay the foundation for the airport could have an adverse impact on the dolphin’s navigation system in the short term,” researchers said. Dolphins are particularly prone to noise as they use their sonar system to find food, communicate with each other and keep predators at bay.

“In the long run, such disturbances could force these marine mammals to leave the area or even kill them,” according to the study, conducted by the Third Institute of Oceanography under the State Oceanic Administration.

Sanya New Airport Investment Construction Co. Ltd, a subsidiary of Hainan Airlines, is building two artificial islands for the airport project. The company refused to respond to a Caixin query on whether it had violated laws by starting construction before getting an environmental impact clearance.

Company spokeswoman Qi Lin said only the land parcels that are being built are “insignificant portions of the project,” and that the company will abide by any recommendations in the environmental impact study “for the entire construction.”

But activists fear that since construction was well underway, experts’ suggestions on how to minimize the project’s ecological damage may be ignored.

For example, researchers have advised developers to use drills instead of pressurized pumps to lay the foundation for the airport to keep noise levels low. But local fishermen told Caixin that there were “strong pumping noises” coming from the construction site.

The company spokeswoman didn’t offer details on what technology is being used for the project.

Another suggestion said boats going in and out of the bay area carrying construction materials should limit their speed to slower than 8 nautical miles (9.2 miles) per hour to avoid any accidental collisions with dolphins.

The International Union for Conservation (IUCN) has classified Chinese white dolphins as a “nearly threatened,” or just two steps before being endangered.

In China, the marine mammal is listed as a Grade One National Key Protected Species, the highest level of protection for an endangered animal. Their population in the Pearl River Estuary, including Hong Kong and Macau, is estimated to stand at 2,500, according to the latest data from the World Wildlife Fund–Hong Kong. Although the animal was Hong Kong’s official mascot during the handover ceremony in 1997, when Britain returned the territory to China, its numbers have dwindled in recent years due to pollution, heavy marine traffic, overfishing and coastal development.

A local conservationist group that surveyed the area with image-recognition technology estimates that Hongtang Bay is home to about 70 white dolphins, a subspecies of the Indo-Pacific humpback dolphin.

Researchers who compiled the environmental impact assessment said the airport project could wipe out marine life within a 25-square-kilometer (9.7-square-mile) area surrounding the two artificial islands built for it by land reclamation.

That is because land reclamation at Hongtang Bay will fundamentally alter the sea currents in the area, leading to soil erosion along the shoreline and a buildup of pollutants in the water, the study said.

These pollutants could decimate fish stocks that dolphins depend on, it added. Pollution, particularly from heavy metals, can also lower reproduction rates among the species, according to conservationists.

The environmental impact assessment also said that some parts of the coral reef along the 6-kilometer coastline should have also been relocated before construction began.

The developer signed an agreement with the Sanya Administration for National Coral Reef Reserves in late 2016 to fund the relocation of the reef, said Fu Jie, who heads the authority.

But the company was yet to quote a specific sum for the relocation, he said. That’s because an environmental impact study was needed to judge the extent of possible damage before deciding on the level of compensation.

Fu fears that because the developer started building the airport before the impact assessment was completed or approved, this may make it impossible to give out compensation to affected parties, including fishermen, later on.

In a letter to SOA in May, Friends of Nature urged authorities to look into what it called “illicit construction activities” in Hongtang Bay and to hold the developer to account. However, SOA is yet to respond to the request.

The rush to reclaim land and build a second airport in Sanya comes amid a boom in tourism. The resort town, known as “China’s Hawaii” for its pristine beaches, mild weather and clean air, attracts millions of visitors and “seasonal migrants” from northern provinces who fly in to escape smog and freezing winters.

The number of overnight visits to the balmy city quadrupled from 2005 to 2015 to over 15 million. Sanya is also often referred to as “Moscow on the South China Sea” because it’s popular with Russian vacationers, who accounted for nearly 20% of the 190,000 foreign visitors in 2015, according to official data.

The number of visitors to this tropical haven is expected to reach 37 million by 2025 and 55 million in 2045, according to the environmental impact study for its second airport.

The city’s existing airport, Sanya Phoenix International, was built in 1994 and has undergone three rounds of expansion. But it could handle a maximum of only 25 million passengers a year, the airport authority said.

The second airport that is slated to open in five years can handle 60 million passengers each year. It is also earmarked to become an international hub for air travel under China’s ambitious “Belt and Road” initiative, according to a development plan released in August 2016.

Friends of Nature said conservationists don’t want to stop the project, but it is calling on regulators and the developer to comply with laws and regulations that require construction to start only after an environmental impact clearance was given.

The ongoing reclamation operation for the new airport is the latest effort by the local government to make more land available amid a property sizzle in Sanya. Creating artificial islands has become a cheaper option as land was scarce and because it doesn’t involve demolishing existing infrastructure or relocating people from their homes.

Land was sold for 50 million yuan ($7.40 million) per acre in Sanya in March, according to Fang.com, a consultancy offering property market data. It costs only 600,000 yuan to reclaim a similar-sized plot, according to estimates by some industry analysts.

However, pumping sand into the sea to create new land often comes at a price in terms of environmental degradation and safety. Land reclamation since the 1950s has destroyed two-thirds of the mangrove cover that protected Hainan’s coastline, according to a 2015 study by Wang Yan, a researcher at Hainan Ocean Monitoring and Forecasting Center. These artificial islands are also more vulnerable to damage from earthquakes and tidal waves.

Petals of a lotus

Sanya New Airport Investment Construction Co. is developing another artificial island next to the airport in violation of environmental regulations, according to Friends of Nature.

This project is known as the “Lotus Flower Island” as it mimics a large lotus with eight petals and two giant lily pads. This complementary structure, which spreads over 1,000 acres, is expected to house an industrial park and a multifunctional mall.

Any reclamation project on a site larger than 50 hectares (123.6 acres) requires approval from the State Oceanic Administration before construction, according to the 2001 Law on the Administration of Sea Areas. Developing a smaller site than this threshold requires only the approval from the provincial government — and provincial governments in the past have often favored economic growth over the resulting environmental impact.

The company has exploited this loophole and started work on the Lotus Flower Island armed only with an environmental clearance issued by the Department of Ocean and Fisheries of Hainan in February 2016 for two parcels of land close to the shore, according to Friend of Nature. These land slots will form two petals of the structure, or just 12% the entire project.

A survey by Caixin in early May found that nearly a quarter of the land needed for the Lotus Flower Island had already been reclaimed.

The company seems to have adopted a “piece-by-piece approach” by dividing the whole Lotus Flower Island project into smaller parcels and seeking the required environmental clearance for individual plots because the ecological impact from each of these “petals” appear to be much less compared to the whole structure, the activist group said.

However, such a maneuver is strictly forbidden according to a directive released by the State Oceanic Administration in October 2013. Sanya New Airport Investment Construction Co. declined to answer Caixin’s queries on the matter.

“The provincial department of ocean and fisheries has allegedly approved the first-phase development of the Lotus Flower Island even though it knows developers are prohibited from dividing a larger project into smaller units,” the NGO said in a statement in May.

Deng Shaoyong, a spokesman for Hainan’s ocean and fisheries department, refused to respond to the allegations leveled by the environmental group.

Deng, however, said that his department has ordered the developer to suspend reclamation activities on the island that will house the airport until the environmental impact study was approved. Deng didn’t say when the order was issued. He added that he didn’t know whether the company has complied with the order. When Caixin visited the site in late May, construction was still underway.

The once-crystal-clear waters of Hongtang Bay has already turned green with white foam and small slicks of oil seen around heavy machinery used to dredge the sea bed.

“If this pollution continues, the fish and shrimp could die,” said a local fisherman who said he is worried for his livelihood.