By April Ma and Huang Rong 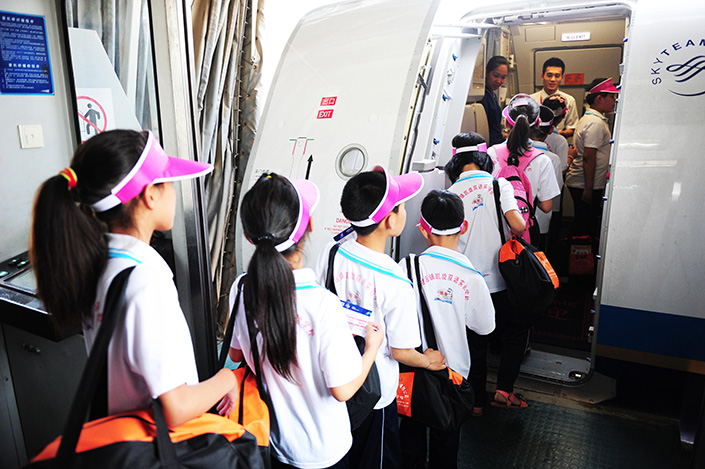 China this year has seen 7,000 more flight delays a day than it did last year, as the on-time flight rate so far this year has fallen to 71.8%. Photo: Visual China

(Beijing) — You can reach for the sky in China — but chances are that you’re going to have to wait.

So far this year, the country has experienced 7,000 more flight delays per day than it did last year, as increases in unfavorable weather, military exercises and wayward drones have kept China’s planes grounded.

With the world’s second-largest population of air passengers, China’s on-time flight rate reached a three-year low this year of 71.8%, nearly 6 percentage points lower than the same period for 2016, according to the Civil Aviation Administration.

June has been the worst month, with barely more than half of the flights taking off on time — if at all. These holdups and cancellations have been attributed largely to extreme weather conditions as the rainy season begins.

In fact, weather has caused half of the total delays so far this year. Torrential rains in southern China, particularly along the Yangtze River, have grounded thousands of flights alone.

Increased military activity has contributed to over a fourth of the delays and cancellations. This figure increased starkly from 2013, the last year data were released, when it was revealed that military exercises caused 7% of delays.

Nearly 800 flights were affected by drones illicitly flying near airports, a number that has ballooned eightfold from last year. There were a series of near-misses with unmanned aircrafts early in the year, and in April, more than 100 commercial flights were postponed or forced to change the route due to drones straying into airspace around the Chengdu Shuangliu International Airport in Sichuan province.

Other factors are to blame as well. For example, there has been a 9% increase in flights this year, which has stretched airport and air traffic control capacities.

Many miscellaneous activities by passengers have contributed to delays as well.

On Sunday, a family of five failed to buy a ticket for their toddler, and the plane was grounded for five hours to determine why unaccounted-for passengers had been allowed to board. The family was not held liable, as it was ruled that they were unaware that small children are required to have boarding passes.

Last month, an elderly passenger boarding a flight from Shanghai to Guangzhou tossed coins toward an engine for good luck, delaying the trip by over six hours. Also in June, another passenger deployed an evacuation slide while the plane awaited takeoff, delaying the flight for hours.