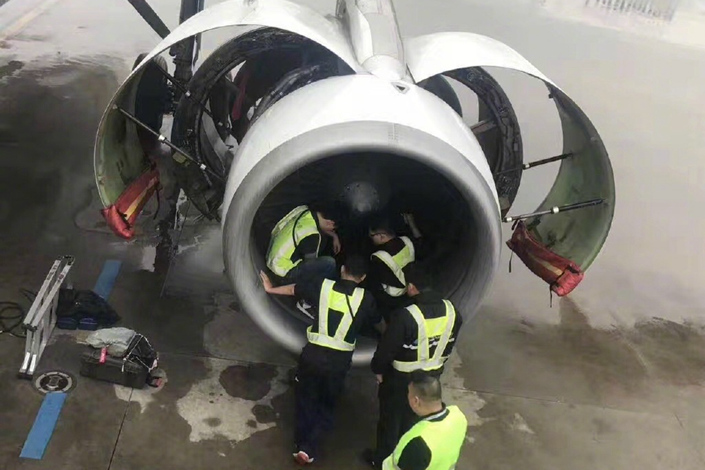 Engineers carry out a safety inspection at the Pudong International Airport after a passenger threw coins toward a jet engine. Photo: Xinmin.cn

Throwing coins into water is a common ritual for many people making a wish for good luck, but trying it with jet engines may have the opposite effect.

On Tuesday afternoon, a flight from Shanghai to Guangzhou with 150 passengers was delayed for almost six hours at Pudong International Airport after an elderly passenger tossed coins toward an engine before boarding for good luck.

Local police described the passenger as an 80-year-old woman traveling with her family. One of the nine coins dropped into the engine of the China Southern Airlines aircraft.

An aviation engineer said a coin falling into the core of a jet engine could break compressor blades and create a risk of explosion. The cost of a single engine for the Airbus A320 plane is about $50 million, according to a purchase contract released by China Southern Airlines.

The woman was taken into police custody as engineers carried out safety inspections of the engine. The flight, scheduled to depart at 12:40 p.m., took off at 6:16 p.m., according to the airline.


It is unclear how the passenger will be punished. Earlier this month, a passenger was detained for 12 days for sabotaging public transportation after she deployed an evacuation slide without authorization on a plane awaiting takeoff. The episode delayed the flight for hours and caused at least 100,000 yuan in costs for Xiamen Airlines.

China’s civil aviation authority introduced a traveler blacklist in 2016 to track passengers with records of violations and impose temporary restrictions on their air travel. As of last month, a total of 106 passengers have been blacklisted.