By Liu Jiaying and Li Sijia 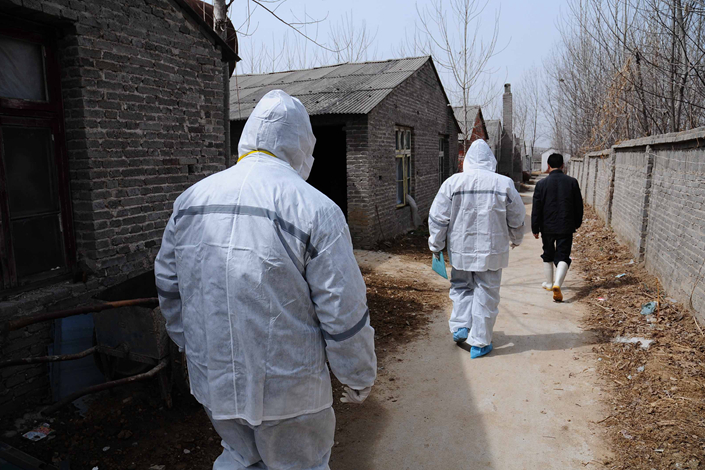 Two animal-health supervision experts prepare to enter a pig farm in Nanyang, Henan province, in March 2011 to perform tests for clenbuterol, an illegal fat-burning stimulant that increases the ratio of lean meat to fat. Photo: IC

Fifty-two-year-old Yue Bangchao has spent half a decade wondering how to tell his parents about the two and a half years he spent in jail.

The once-exemplary animal-health official, regularly praised by higher-ups for his “outstanding achievements,” had his career cut short when he was convicted of dereliction of duty in 2011.

Yue’s case highlights how a rush to judgment, especially after food-safety scares, can sometimes snare peripheral players while failing to address the root cause of the problem.

On March 15 of that year, a prime-time exposé on CCTV, China’s national broadcaster, revealed that a number of factories in Henan province had produced and sold pork with traces of “lean meat powder,” or clenbuterol, an illegal fat-burning stimulant given to pigs to increase the ratio of lean meat to fat.

The drug is available by prescription in certain countries—not including the U.S. or China—to treat asthma in humans. It is also abused by bodybuilders and athletes looking for its off-label weight-loss effects. But it has been banned for use in meat-producing animals in China, the U.S. and the EU because even trace amounts have been shown to increase heart rates, nausea and dizziness in humans.

The issue of food safety has become increasingly politically charged in recent years. After a scandal, the government often acts quickly, sometimes resorting to anti-corruption-style arrests of local officials apparently as a way to placate an outraged public.

Less than two weeks after the CCTV report, 72 people had been taken into police custody for “allegedly producing, selling or using clenbuterol,” and 53 government officials had been investigated for dereliction of duty in Henan alone, according to the official Xinhua News Agency.

The report indicated that some of the “problem pigs” had made their way to Nanjing, in neighboring Jiangsu province. Yue had been the director of Nanjing’s Jianye District Animal Health Inspection Department since 2008. The day after the CCTV exposé, he followed orders from municipal authorities to conduct tests for clenbuterol. After three days, 132 pigs from a slaughterhouse in Yue’s district tested positive for traces of the banned substance.

On March 19, before he had even finished filing the report on his findings, Yue was called in by the district party’s Commission for Discipline and Inspection and questioned for eight hours. He was eventually convicted by the district People’s Court for dereliction of duty and sentenced to two years and six months in prison.

Yue maintains that his Animal Health Inspection Department was responsible only for regulating livestock raised in his district in Nanjing, and that meat and livestock produced in other areas — in this case, Henan — and sold in Nanjing should have been overseen by Nanjing’s industry and commerce regulators. He argues that each department is responsible for its link in the supply chain within their respective jurisdictions, and that pigs raised in Henan but slaughtered in Nanjing were already under the Henan industry and commerce regulators, not Nanjing’s animal health inspection unit.

Because of this, Yue believes, industry and commerce officials should have been the ones responsible for conducting testing for the illegal additive. He said that except for the lead-up to the 2008 Beijing Olympics, superiors had never ordered regular testing for clenbuterol, much less devoted resources or personnel to the endeavor.

Wang Jian, who was the trade section chief at Nanjing’s Jianye district commerce bureau in 2011 and also prosecuted following the clenbuterol scandal, told Caixin that he too had never received instructions to conduct regular testing for the banned drug. “We had no equipment, no people, and no money,” he said. “There was no way we could have been testing for clenbuterol.”

Zhang Xueming, a lawyer at Beijing’s Jinshuo law firm, told Caixin that national regulations roughly delineate different areas of regulation for agricultural, quality supervision, industry and commerce, and food and drug supervision authorities. But when it comes down to performing specific tasks at a local level, overlapping responsibilities often result in confusion.

In an effort to clarify and simplify regulation, an amended version of China’s Food Safety Law, adopted in 2015, reduced the regulatory agencies involved in ensuring food safety from five to three. And since Yue’s controversial case, the Ministry of Agriculture has taken over the supervisory role once played by the Ministry of Commerce in regards to the slaughter of pigs.

But this has given rise to dangerous conflicts of interest, according to Zheng Fengtian, vice president of Renmin University’s Agricultural and Rural Development Institute. Now, the Ministry of Agriculture is responsible for ensuring both quality and production output. “When you control for quality, production output suffers,” Zheng said.

He noted that since the change, most instances of clenbuterol contamination have been detected by food and drug administration testing, not testing conducted by agricultural authorities. “Do you think the agricultural departments overseeing livestock aren’t aware” (of the clenbuterol use)?” he asked.

In response, some localities have scrapped efforts to integrate food safety work under fewer departments, according to Tu Yongqian, a researcher at the Renmin University Food Safety Government Collaborative Innovation Research Center.

But China’s approach to food safety, built largely on punishments and corrective measures in response to high-profile scandals, is failing to address some of the issues having the most detrimental impact on public health, Zheng said. Issues such as pumping water into pork to increase its weight and therefore sale price, and the illegal use of clenbuterol, have garnered widespread media attention, and therefore a bulk of government attention.

Despite government pledges to crack down on clenbuterol use in pork production following the report, the practice continues. In August, Hong Kong Food and Health Secretary Dr. Ko Wing-man was forced to issue a public apology for failing to prevent clenbuterol-contaminated pork imported from the Chinese mainland from entering Hong Kong markets.

Earlier in May, the U.S. National Football League issued a statement warning its players not to consume meat in China or Mexico, saying meat from the two countries “may be contaminated with clenbuterol, an anabolic agent which is banned by the NFL Policy on Performance-Enhancing Substances.”

Yue’s case highlights how the post-scandal crackdown approach to regulating food safety is failing to address systemic issues, such as clarifying which departments are responsible for monitoring which sections of the food supply chain. It also means that without a high-profile scandal, other threats, such as widespread overuse of antibiotics, are left unaddressed.

But Zheng said that the single biggest threat to public health in relation to food safety in China is the abuse of antibiotics. According to a World Health Organization (WHO) report released on May 21, China accounts for about half of the world’s antibiotic use, with just over half of this figure involved in meat production. The report said that if no measures are taken to curb the widespread use, antibiotic resistance will lead to the premature deaths of around 1 million people each year in China by 2050.

One of the biggest challenges for regulators, whether in detecting overuse of antibiotics or clenbuterol, is that over half of the country’s pork comes from small-scale producers, many of them individual farmers, Zheng said. This setup is both a strain of food safety regulators—it is downright impossible to regulate what each individual farmer is feeding their pigs—and economically inefficient. Traditional backyard farms can no longer keep up with China’s demand for the meat, and the country has been forced to import large amounts of pork from countries like Germany and the U.S.

But even as China seeks to upgrade its domestic pork production efficiency, a lack of personnel, funding, and proper testing equipment is another major hurdle to ensuring food safety, Tu said. He said that when it comes to ensuring that not a single contaminated item of food finds itself on a consumer’s plate, no amount of government oversight will ever be enough.

He said places like the U.S. and Europe have largely made up for this gap by empowering third-party watchdogs and encouraging self-regulation by industry associations, and Tu encourages China to follow this example.

Zheng hopes that China will be able to address its systemic pitfalls and end its reliance on crackdowns and sacrificial scapegoats like Yue. “People only pay attention to food safety when something big happens,” he said.

As for Yue, he still hasn’t told his parents about his conviction. He filed his latest appeal in November to the Jiangsu Higher People’s Court, but has so far received no response.