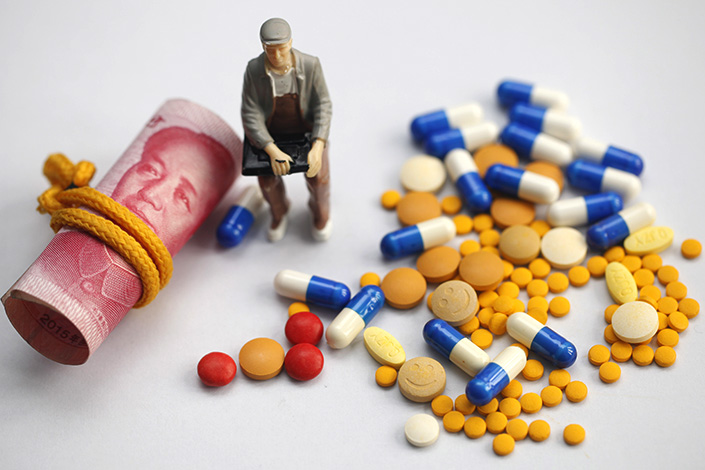 (Beijing) — Last month, a doctor at a Shanghai hospital was caught on camera accepting four cash envelopes within three minutes from pharmaceutical agents, and even telling one that he would prescribe enough drugs so that the salesman could buy a new iPhone in a month.

This scene from a recent investigative documentary aired by state broadcaster China Central Television (CCTV) shed light on the widespread problem of doctors at public hospitals taking kickbacks from pharmaceutical agents to supplement their income.

Even global drugmakers such as GlaxoSmithKline PLC, Pfizer Inc. and Eli Lilly and Co. have been fined in recent years for offering bribes to physicians and hospital authorities in China.

The more you prescribe a certain brand, the higher the sweeteners you get from the drug maker, a retired health official in Shanghai told Caixin. “And regulators usually turn a blind eye to the practice unless they receive concrete tips,” he said. “But whistleblowers are rare.”

The eight-month-long investigation by CCTV targeted three hospitals in Shanghai and two in Changsha, Hunan province, but stopped short of naming the offenders.

It showed one pharmaceutical sales agent offering a doctor 45 yuan ($6.57) for each box of allergy medicines prescribed, but patients were charged 129 yuan for the small box of tablets at the pharmacy affiliated with the hospital.

Health authorities in Shanghai moved swiftly to suspend three doctors pending a further investigation. Regulators in Changsha temporarily halted the sale of Rosuvastatin Calcium, a drug used to treat high cholesterol, which was found to have been overprescribed by doctors in return for commissions.

But the exposé and the ensuing public uproar is unlikely to put an end to such practices unless health authorities raise the base pay for doctors and stop linking part of their benefits to revenue they generate by prescribing drugs and expensive medical tests.

“A good system leaves no space for sinners, but the current medical system in China would only turn doctors into villains,” said Su Xiaojun, an anesthetist at a leading military hospital in Beijing.

Most hospitals in the country are controlled by the government, but public funding accounts for only about 10% of the budget needed to keep them afloat, according to Duan Tao, president of Shanghai First Maternity and Infant Hospital Corp.

Public health care providers must raise money on their own to cover most of their expenses. And because there are tight state controls over how much can be charged from patients for services such as doctors’ consultations and in-patient care, hospitals have resorted to making money by adding fat markups when selling drugs or from medical tests, Duan said.

As a result of their anemic finances, state hospitals usually pay doctors a low base salary. A 2015 survey of nearly 30,000 physicians in China by DXY.cn, an online community for health care workers and pharmacists, shows doctors earned on average 77,000 yuan a year.

Although this was more than triple the average income for urban dwellers nationwide, three-quarters of those surveyed said they were not happy with their earnings. They said they had invested more time and money on a medical degree and often worked overtime. Over two-thirds said they work eight to 10 hours a day on a regular basis, and more than a quarter said they worked more than 10 hours a day.

“Do you think it’s all right for a doctor like me to earn as much as a barber?” asked Su at the army hospital in Beijing. He said if physicians can be properly paid, most will stop accepting gifts and cash envelopes.

Such practices raise an ethical dilemma if doctors think it is acceptable for them to take bribes because they are underpaid, said Zhai Xiaomei, director of the Bioethics Research Center at China’s top medical university, Peking Union Medical College.

“You can argue for a solution to address physicians’ low pay, but relying on kickbacks is a totally different issue and we should not link the two,” she said.

The practice could also worsen the already high levels of distrust between doctors and patients, and this has led to a string of assaults against medical staff in recent years, Zhai said.

Because of the kickbacks, doctors are tempted to prescribe excessive amounts of expensive drugs that patients don’t necessarily need, and this might at times even put their health at risk, several medical professionals interviewed by Caixin said. This is akin to stealing from patients and the state-backed medical insurance system, they said.

For example, China consumes half of the world’s antibiotics, according to the World Health Organization. Nearly half of that goes to patients, and the other half is fed to animals reared for meat and dairy, according to a WHO report in May 2016.

Overprescription of pills at public hospitals is largely behind the abuse of antibiotics in the country, said Zhang Jichun, head pharmacist at Peking Union Medical Hospital.

This has led to another form of palm-greasing. Several patients interviewed by Caixin said they felt compelled to give doctors and surgeons “red envelopes” full of cash just to get the right prescription or to “feel safe” when going under the knife.

“If I don’t offer a red packet to my doctor, I would be worried about not getting the proper diagnosis or feel that my operation might not go well,” said an elderly patient at the Beijing Cancer Hospital who asked not to be named.

Li Qingshan, from the eastern port city of Qingdao, who underwent a heart operation last year, said he gave 5,000 yuan to the head surgeon at his hospital to have his surgery performed by that doctor. The sweetener also allowed him access to a better-than-average ward and services of skilled nurses — decisions that are all made by the head surgeon, he said.

The public, regulators, hospital officials and doctors are all well aware of the fact that physicians rely on bribes from patients and drug sales representatives for the bulk of their income, said Yu Ying, a former doctor at Peking Union Medical College Hospital.

But authorities have done little to stamp out this malice because they know that a harsh crackdown will lead to a collapse of the entire system, like a mud house hit by a strong earthquake, said Yu, who now heads the out-patient unit at Beijing-based private hospital Amcare.

China does not have an anti-kickback law specifically targeting health care workers as the U.S. does, but under Chinese law, it is a criminal offense if the bribes given to any public official exceeds 5,000 yuan.

However, the police and state prosecutors have been reluctant to jump in and investigate or charge physicians accused of being corrupt, according to a lawyer who offers legal advice to medical workers in Beijing. Therefore, only a handful have been detained or charged so far.

“Otherwise, most doctors (at public hospitals) would end up in jail,” said the lawyer, who asked not to be named. “If I’m in charge of law enforcement, I wouldn’t push too hard either because there would be so many patients left without medical care.”

Addressing the problem of poor pay, which is at the heart of the issue, was a better alternative to a sweeping crackdown, said Zhu Hengpeng, director of the Policy Research Center at the government-backed Chinese Academy of Social Sciences. “If doctors could enjoy the same transparent and competitive packages as their peers get at private clinics, they would have no reason to accept kickbacks and red envelopes,” he said.

Regulators must also allow doctors at state hospitals to open private clinics or work part-time in private hospitals, he said.

Beginning last year, the National Health and Family Planning Commission has gradually lifted restrictions on doctors who wish to open their private clinics or work in private hospitals.

However, few doctors at state hospitals have made the move to open up a private practice because it requires jumping several bureaucratic hurdles, including acquiring an environmental impact assessment report from the local government, Yu said. Doctors were also worried about their career prospects at private hospitals because most of them are small and ill-equipped.

Authorities also need to lift price controls on consultation services offered at public hospitals so that they can charge more for premium services instead of relying on revenue from drug sales and medical tests to shore up their bottom lines, she said.

In November, the State Council issued a set of proposals to ban public hospitals from marking up prices of drugs they sell and giving them more leeway to decide on prices for services instead. But the council, China’s cabinet, did not set a deadline for the reform to take effect nationwide.