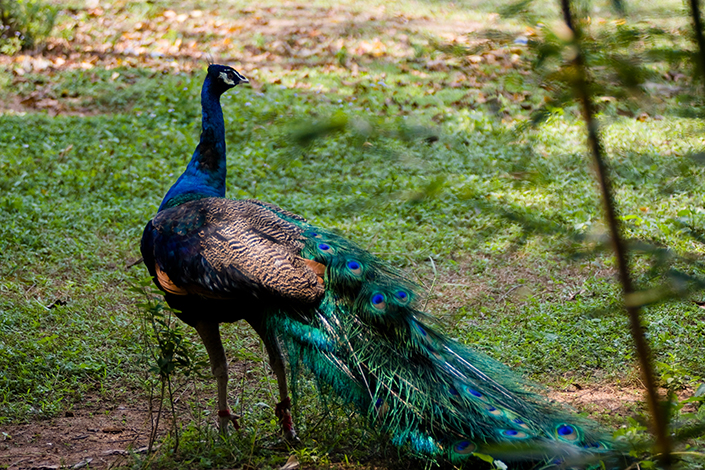 (Beijing) — The endangered green peacock would be further threatened by a hydropower dam in China’s southwestern province of Yunnan, charges an environmental group that is seeking an injunction to stop construction.

The Beijing-based non-governmental organization Friends of Nature said the dam could flood the habitats of the green peacock. It filed the suit with a court in Yunnan’s Chuxiong prefecture, claiming that the environmental impact study for the dam is flawed because it was conducted by a subcontractor — Kunming Engineering Corp. — of the construction company.

Kunming Engineering Corp., a subsidiary of state-owned PowerChina Corp., also holds a stake in the construction firm, a local subsidiary of Hydrochina Corporation, according to the advocacy group.

The green peacock, native to Yunnan and also known as Pavo muticus, is classified by the International Union for Conservation (IUCN) as an endangered species. In China, the bird is listed as a Grade One National Key Protected Species, the highest level of protection for an endangered animal.

Only 500 green peacocks are left in the province, according to a survey conducted in 2013 and 2014 by the Chinese Academy of Sciences’ Kunming Institute of Zoology.

The lawsuit is the latest in a series of claims that major infrastructure projects aren’t abiding by environmental impact rules.

A company affiliated with Hainan Airlines, part of HNA Group, is being accused by the same environmental group of starting the construction of a mega airport in Sanya on the resort island of Hainan without proper environmental impact clearance.

But such public-interest lawsuits brought by individuals and NGOs are still rare in China – and difficult to win. In 2014, a woman sued in Beijing but lost in her fight against a refinery plant she said was causing air pollution where she lives Anning, Yunnan province.

The latest lawsuit hones in on government rules that say companies contracted to work on projects needing an environmental impact assessment are required to hire an independent party to carry out such studies.

Kunming Engineering Corp. also failed to note in its environmental study that Gasajiang Hydropower Station on the Hong River will flood habitats for several species in Yunnan, including the green peacock.

The area will be dammed for construction beginning in November, and the multi-billion-yuan hydropower station is scheduled to be up and running in August 2020.

Upon completion, it will flood Shuangbai county in Chuxiong prefecture and Xinping county in the city of Yuxi on the middle and upper reaches of the Hong River, two habitats for green peacocks, according to the conservation group.

Both Kunming Engineering Corp. and Hydrochina Corp. did not respond to Caixin regarding the lawsuit.

Friends of Nature said it had complained to the environmental protection department in Yunnan but that it refused to take action.

Chuxiong Prefecture Intermediate People’s Court has not announced a date for a court hearing.