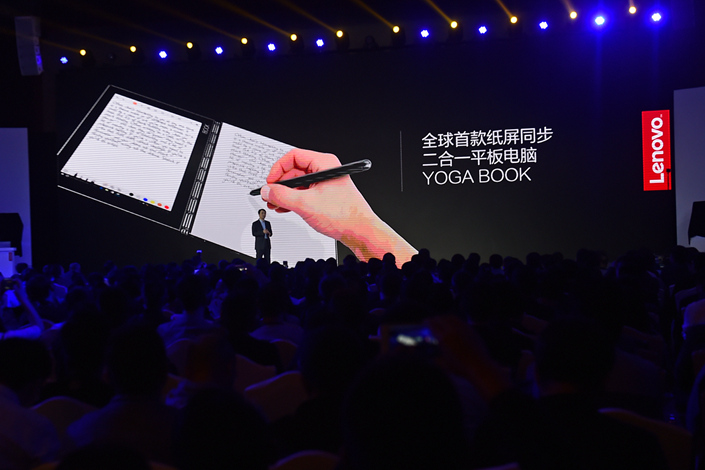 The U.S. Federal Trade Commission had accused Lenovo of harming consumers after it was discovered that some of the company’s laptops had been preloaded with software that could access users’ personal information. Above, a Lenovo executive introduces a product in the northern city of Tianjin in March. Photo: IC

Lenovo will pay a $3.5 million fine to the U.S. Federal Trade Commission (FTC) to settle charges it doesn’t completely agree with.

The FTC, along with 32 U.S. states, had first alleged that world’s second-largest seller of personal computers was harming consumers after the some of its laptops had been discovered in February 2015 to be preloaded with software called VisualDiscovery.

The software had “access to all of a consumer’s sensitive personal information transmitted over the internet, including login credentials, Social Security numbers, medical information, and financial and payment information,” according to a statement by the FTC.

After the security flaw was discovered, Peter Hortensius, Lenovo’s Beijing-based chief technical officer at the time, said in a 2015 interview with PCWorld that the company had “messed up.”

But in its statement this week, Lenovo said it “disagrees with allegations contained in these complaints.”

The company stopped preloading the adware onto consumer laptops in early 2015, and said that as far as it was aware, no third party had used VisualDiscovery to access user information. Nevertheless, it said it was “pleased to bring the matter to a close after two and a half years.”

The $3.5 million fine will be split between the 32 states, according to a New Jersey state government press release.

Lenovo will also be required to get active consent from consumers before installing similar software onto its products, and will also face third-party audits, the FTC said.

The company, once the world’s largest maker of personal computers, has seen its PC business fall 6% in the three months through June 2017, the same quarter it reported a $72 million loss.