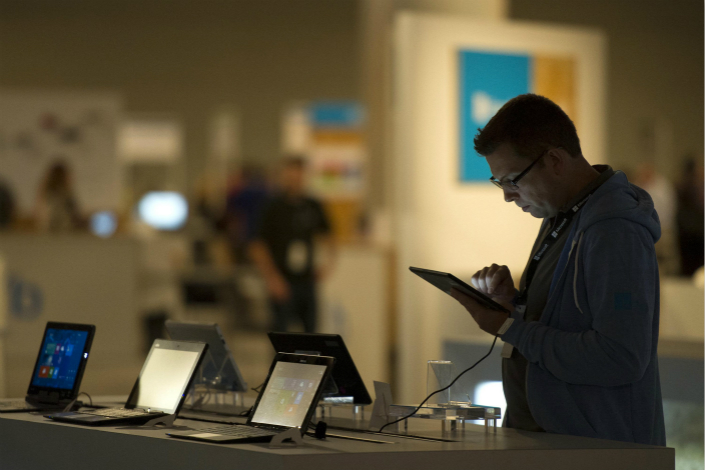 PC-maker Lenovo Group Ltd. reported a loss of $72 million for its latest quarter, reversing a $173 million profit a year earlier. Above, an attendee of the Microsoft Corp. Build Developers Conference examines a Lenovo ThinkPad Tablet 2 in San Francisco in June 2013. Photo: Visual China

PC-maker Lenovo Group Ltd. swung to a loss in its latest reporting quarter, as stabilizing sales in its struggling smartphone unit failed to offset a sharp decline for its core PC business.

The weak results sparked a sell-off for Lenovo shares, which were down 3% in early Friday trading after the release of the company’s report for the three months through June. At current levels, the stock now trades at lows not seen since 2011.

“The group continued its focus on striking a balance between growth and profitability in its PC and smart device business while executing its transformation strategy in its mobile and data center businesses,” Lenovo said in a review of its quarterly performance. “The challenges arising from the combination of key component cost increases and supply constraints continued to impact the group’s performance in the quarter under review.”

Lenovo reported a loss of $72 million for its latest quarter, reversing a $173 million profit a year earlier. Revenue was flat at around $10 billion.

Within its larger product pool, sales for the company’s core PC business fell 6% to 12.4 million units, double the rate of decline for the overall global PC market during the quarter. PCs were previously a bright spot for the company, propelling Lenovo to prominence as China’s first major global high-tech brand. But the company has shown recent signs of stumbling in its core area amid renewed pushes by traditional rivals HP Inc. and Dell Inc.

Lenovo’s slide in the business, coupled with gains by HP, helped the latter consolidate its place as the world’s largest PC seller in the second quarter, after recovering the title from its Chinese rival earlier this year. The declines pushed Lenovo’s share of the global PC market to 20.5% in the second quarter, marking a rare decline for the company from the previous year.

While PC sales were weak, Lenovo’s newer smartphone business showed signs of stabilizing after several years of steep declines. Lenovo said its smartphone shipments grew 1% during the quarter, while its mobile business revenue rose by 2% to $1.7 billion, accounting for 17% of its total revenue.

“Looking forward, the supply constraint of key components in the industry and cost increases will continue to bring short-term challenges to the group’s business environment,” the company said. “The group will continue to execute its strategy diligently to drive sustainable profitable growth over time.”