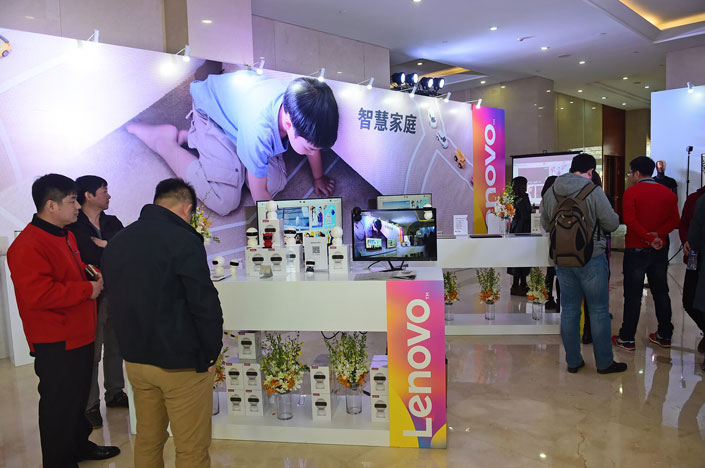 Visitors look at a display during the Lenovo Tech World in Tianjin, China, on March 27. Photo：IC

(Beijing) – Stumbling PC giant Lenovo Group Ltd. said its profit tumbled in the final quarter of its fiscal year, but it saw early signs of a recovery as revenue returned to a growth track after more than a year of declines.

Lenovo’s shares rose 3.7% in Hong Kong after the results came out, as investors hoped for light at the end of a long tunnel for the struggling technology titan, which lost its crown as the world’s biggest PC maker to HP Inc. in the first quarter of this year.

That was just the latest blow for a company whose smartphone business, seen as its wave of the future, struggled throughout the year.

Lenovo said its profit for the three months through March, its fourth fiscal quarter, fell 41% to $107 million, bringing the profit for its latest fiscal year to $535 million. The latest annual profit marked a strong improvement over the previous fiscal year, when Lenovo posted a $128 million loss at the height of its struggles.

Revenue in the company’s latest quarter rose 5% to $9.6 billion, marking the first quarterly growth since the three months ended September 2015.

“Despite market conditions that will remain challenging in the short term, the group exited the year with stronger organization allowing for sharper customer focus and more compelling product portfolio across all our business,” Lenovo said in a statement. “Together with its competitive cost structure and solid execution, the group remains confident in its vision and strategy to drive long-term profitable growth.”

Lenovo did not break out results for its various units in the latest quarterly figures. But it said revenue for all of its key divisions fell in its latest fiscal year, led by a 1% drop in its core PC business. It said its mobile business revenue, which accounts for nearly a fifth of its total, fell by 10% for the year. But that was a strong improvement from the quarter through December, when mobile business revenue tumbled 23%.

“The group’s strategic shift in its mobile business in the fiscal year under review has started showing signs of strengthening, leading to a strong performance in the rest of the world outside China markets, while repositioning its China business,” the company said.

Lenovo has undergone a steady stream of changes over the last year in a bid to right its ship, most recently reorganizing its China region that accounts for more than a quarter of sales. Even after the modest rally following the latest results, the stock is still down slightly from year-ago levels, well behind a gain of more than 20% for the broader Hong Kong market over the same period.