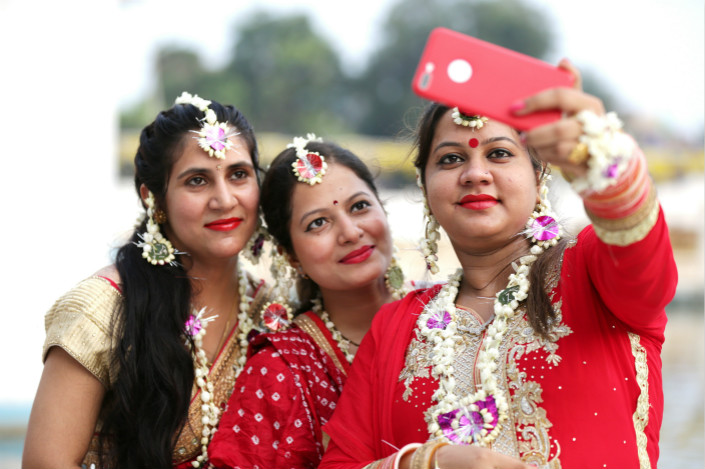 Xiaomi consolidated its position as the Indian market’s clear No. 2 seller, behind only Samsung, by posting 25% year-on-year growth to command 17% of the market in the second quarter, while Vivo posted similar growth to finish third with 13%. Above, newly married Indian women take selfies with a cellphone as they visit the Lakshmi Narayan Temple in Amritsar, India, on July 16 during the Teej festival. Photo: IC

Chinese smartphone-makers consolidated their place as the dominant force in India, taking 54% of the market in the second quarter on strong gains by Xiaomi Inc. and Vivo Smartphone, according to data supplied to Caixin on Thursday by IDC.

But while the Chinese names consolidated their hold as a whole, jostling among members of the ultracompetitive group also saw some companies show signs of faltering, as the previously surging Oppo Electronics Corp. and the stumbling Lenovo Group Ltd. both posted sharp declines during the quarter.

The Chinese brands consolidated their position as the overall Indian smartphone market grew just 1.6% in this year’s second quarter, with 28 million units shipped, according to IDC. The 54% share for Chinese brands during the quarter was up from 51% during the first quarter, and marked a doubling of market share for the group from just a year earlier, the data showed.

The Chinese vendors made much of their earlier gains at the expense of local Indian rivals, but now the latter group’s position is starting to stabilize and return to growth, IDC analyst Upasana Joshi said.

Having conquered their home market, the world’s largest, Chinese brands like Huawei, Oppo, Xiaomi and Vivo are looking overseas for their next frontier. India has been particularly attractive due to its similar qualities to China, including a preference for the lower-cost but relatively high-quality phones that the Chinese brands have become famous for.

Within the group of Chinese vendors, Xiaomi consolidated its position as the market’s clear No. 2 seller, behind only Samsung, by posting 25% quarter-on-quarter growth to command 17% of the market. Vivo posted similar growth to finish third with 13%.

But Oppo, which briefly took the crown as the top smartphone seller in China last year, slipped during the quarter in India, with its shipments down 13% from the previous quarter. Lenovo, one of the earliest Chinese arrivals to India and formerly a leading player, also saw its sales in the market slip 25% from the previous quarter, mirroring difficulties its smartphone business is facing worldwide.