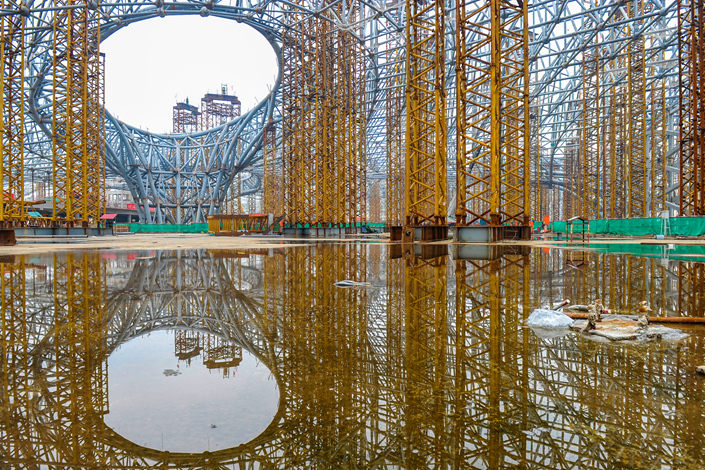 Beijing’s new international airport, under construction in the city’s Daxing district on July 24, was designed to handle up to 72 million passengers and 2 million tons of cargo each year by 2025. Photo: Visual China

Beijing’s new international airport has spent about 40% of its budget so far, or 30.8 billion yuan ($4.7 billion), as the massive facility gets set to take flight in 2019.

The new airport will be located 46 kilometers (28.6 miles) south of Beijing’s city center.

“The airport is taking shape with completion of the steel structure of its terminal buildings,” said Liu Xuesong, general manager of Capital Airport Holding Co., which will own the new airport. Liu spoke at an industry forum on Wednesday.

Construction started on the airport in late 2014. Upon completion, Beijing will become only the second Chinese city with two major airports after Shanghai, putting the Chinese capital in the company of major international hubs like New York and Tokyo.

Unlike Beijing, multiple airports in other world cities usually play complementary roles, such as one serving international routes and the other focusing domestic or regional flights. The new Beijing airport will make Beijing one of the world’s first to have two hubs of a similar size, each catering to domestic and international flyers.

According to the government’s plan, the new airport will mainly serve members of the SkyTeam alliance, a global airline alliance including two of China’s top three carriers, China Eastern and China Southern. In June, China Eastern started construction on a 13.2 billion yuan aviation facility at the new airport.

The existing Beijing Capital International Airport in the city’s northeast would become the hub for Air China, China’s other major carrier, as well as fellow airlines in its global Star Alliance.

Caixin has learned that, like in Shanghai, the new Beijing airport will have a different operator than the one that manages its first airport. It’s a move designed to create competition between the two facilities.

This article has been corrected to remove an erroneous statement that the new airport will be the world's largest.