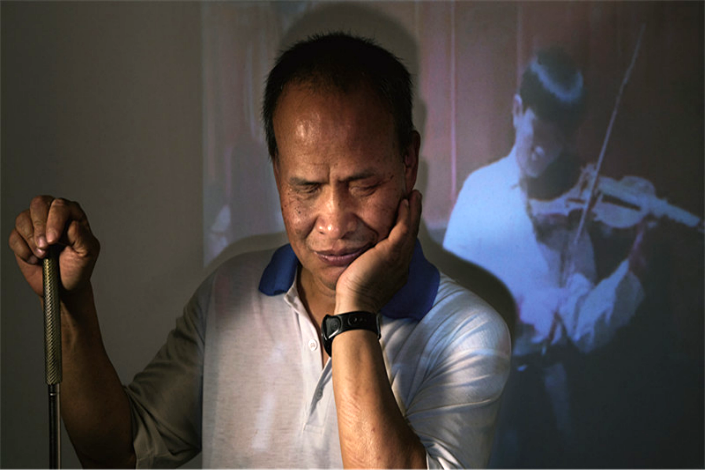 Xiao Huan, born blind, holds back his tears after hearing a volunteer interpreter narrate the film “Together with You” at Xinmu Cinema in Beijing. The boy in the movie, who overcomes many difficulties to learn to play the violin, reminded Xiao that he had been forced to give up his dream to be a singer, he said. Xiao went on to join the choir organized by the Beijing Hong Dandan Education and Culture Exchange Center, which is also responsible for the film screenings. Xiao is now one of the choir’s lead singers. Photo: Liang Yingfei/Caixin

How does a blind person “watch” a movie? Although you can listen to the dialogue, what about the scenes with subtle kisses blown in the wind without any words?

After more than a decade of trial and error, Wang Weili, the founder of an “alternative cinema” in Beijing, has perfected a way that enables thousands of blind moviegoers in China to enjoy classics including Terminator and Jurassic Park.

Wang’s approach is surprisingly low-tech. His Xin Mu Theater, in an old courtyard home near Beijing’s famed drum tower, is equipped only with a LCD TV, a DVD player and just over 20 seats. But every Saturday, this 20-square-meter (215-square-foot) space is packed.

It’s Wang’s unique “visual narration” style that has helped him build a loyal audience. This involves a volunteer explaining the landscape, the action or even the emotions on an actor’s face during gaps between the dialogue. The narrator may even interpret a bit of the director’s “lens language,” or cinematic innuendos, such as whether a cup of coffee left to grow cold indicates a fight between a couple.

“Elaborate dialogue is of no use to our audience; they need specific and simple words,” said Wang. That’s because everyday objects or references that sighted people take for granted are alien, especially to those who were born blind.

So visual narration goes beyond simply explaining what you see on screen. It requires retelling the story to make it more “accessible” to a blind person. “For example, we would say the actor had a big bag, just like a pillow, or that a fan attached to the spoon is a helicopter,” Wang said.

Wang also takes some of his theater patrons on excursions to touch the Great Wall or to feel a spacecraft in a museum so that they have a better understanding when they watch historical films or science fiction movies.

Every time he screens the James Cameron blockbuster “Jurassic Park,” Wang first let audience members feel several dinosaur models, and then he explains the differences between species and the physical characteristics that made a Tyrannosaurus rex a deadly carnivore.

All this preparation helps moviegoers create their own mental visuals based on the on-screen dialog and the off-screen explanation. For Xiao Huanyi, the first day he watched “Little Soldier Zhang Ga” with the help of a narrator at Xin Mu Theater was unforgettable. “Before that, I never thought I could feel a movie so intensely,” said Xiao, who was born blind. “While listening to the movie, a new world appeared in my mind. My own life experiences helped me to imagine what was happening. I could hear the heavy traffic on the streets and I could ‘picture’ a nearby shopping mall, hotels and other places,” he said.

“Visual narration is similar to having a ramp for wheelchair users or sign language for the deaf,” said Wang. “It should be included as a feature in larger cinema chains, so that visually impaired people have access to the same content as anyone else.”

“But this requires a joint effort from the community and government policies, development of laws and offering resources to businesses,” Wang said.

Wang’s theater has screened 685 movies over the past 11 years with the help of over 6,300 volunteers. It has had over 18,800 visitors. Xin Mu Theater is part of a larger nonprofit organization called Hong Dandan Education and Cultural Communication Center, founded by Wang and his wife Zheng Xiaojie in 2003. His nonprofit has built more than 100 schools for the blind in some 20 cities in China.

But, Wang says for the past 14 years, he and his wife had only wanted to do one thing — to make it possible for China’s 17 million blind people to watch films.

That is because “movies are more than just movies. They are a way to understand society, culture and ideology,” Wang said. “Films are a snapshot of what happens in society. If blind people can’t understand these phenomena, they can’t integrate, and will be marginalized.”

Wang is careful when he selects movies. He usually goes for classics such as “The Legend of 1900,” “On Golden Pond,” and “Les Choristes” — movies that encourage introspection.

“Choosing a movie is a serious thing. Horror movies or anything that will depress them or create unpleasant feelings are out of the question,” Wang said. “Because blind moviegoers come into contact with the stories through their ears and their imagination, they could over-interpret things and then the impact is doubled.”

Once, when he was narrating the war movie “Assembly,” an old man suddenly got up and left, saying “I have so many comrades who died in Vietnam, I don’t want to watch this!”

Despite a handful of such hiccups, Xin Mu’s approach has made it possible for some blind viewers to even become film critics in their own circle. “They notice things can experience movies in a way sighted people could never do,” Wang said.

Some films have motivated some to follow their own dreams. Xiao Huanyi is one such person.

“My parents said, ‘You are blind. There’s no use in practicing to sing,’” said Xiao. “I was learning vocal music at that time, but I was helpless. I didn’t sing for more than 20 years.”

After his parents passed away, Xiao’s friends pushed him to get out of the house and take part in different activities. In September 2006, he came to Xin Mu theater to watch “With You.”

The film told the story of a boy who continues to play the violin despite many difficulties, and Xiao couldn’t hold back his tears. “It was very painful to listen to the volunteer narrate it, and I didn’t dare to think of myself,” he said.

But now he is the lead male singer in a choir organized by the Hong Dandan center, which also runs a regular brail book club.

Cui Lianying, is another old fan of the theater. She said the films have helped boost her self-confidence. Cui is partially blind. “Because I couldn’t see the notes on the blackboard in class, I relied on memorizing what the teacher said and had good scores in Chinese and English.”

But after graduating from junior high, she couldn’t find a job for eight years. Cui finally joined her father’s company as a cleaning lady. But after her probation was over she was asked to leave. But she had the pluck to write to the company’s party committee saying “my disability doesn’t affect my work, because those who can see don’t wipe the edges of the windows, but I do.”

When friends pushed her to get married, she would always say “thank you for your concern, but I won’t get married before I get a job.”

It has been an uphill battle for Wang to keep the Xin Mu theater open. “Many times in the past, the name of our organization was used by others to apply for government funds, even without our knowledge,” he said. “I felt like giving up, but when you see the expectations in the eyes of the audience, you just can’t throw in the towel.”

“In Chinese, there is a saying which goes ‘never wake up early if there is no profit’,” he added. “You may think profit in terms of money. But enabling a blind person to follow a film and laugh while clapping his lap, and wiping his tears — isn’t that a meaningful thing?”