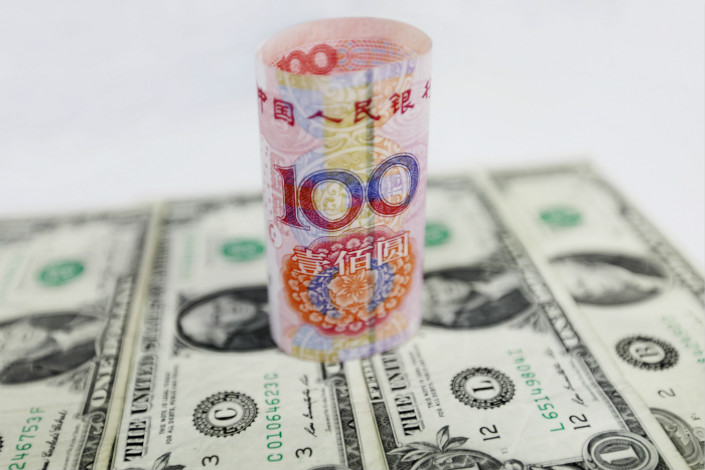 The People's Bank of China has taken measures that analysts say signal the government's intention to slow the pace of the yuan's appreciation against the dollar. Photo: Visual China

(Beijing) — China’s central bank is unwinding some of the policies it introduced over the last two years to prevent the yuan from depreciating against the U.S. dollar, after the Chinese currency appreciated and market expectations for a continued decline dissipated.

The People’s Bank of China (PBOC) has suspended a requirement known as the foreign exchange risk reserve ratio that forced financial institutions buying dollars for clients through currency forwards to deposit 20% of the value of the trades at the central bank. The PBOC’s instruction, which lowered the ratio to zero, was contained in an internal circular seen by Caixin. The central bank also told foreign banks they no longer had to set aside reserves for offshore yuan deposits in China.

The moves may be a signal of the government’s intention to slow the pace of the yuan’s appreciation, according to some analysts, after the currency jumped more than 7% against the dollar this year and by more than 2% in the last two weeks alone. News of the policy changes sent the yuan tumbling more than 0.5% against the dollar in trading in China on Monday, the biggest daily drop since January.

“Both regulations in our view signal an important shift in China’s FX policy with the measures likely designed to alleviate” excessive yuan appreciation, HSBC analysts led by Paul Mackel wrote in a report on Monday.

The central bank hasn’t announced the changes on its website, but confirmed the change in the foreign exchange risk reserve ratio in emailed comments to Caixin.

“Now that the market environment has turned neutral, it became necessary to adjust the previous countercyclical macro prudential management measures targeted at curbing cyclical volatility in the foreign exchange market,” Sun Guofeng, head of the PBOC’s Financial Research Institute, said in the email. “(The policies) should return to a neutral stance to strengthen the function of the market in identifying (proper) prices and to improve market liquidity.”

Sun said that “academia and market participants” are in agreement that currently the yuan’s exchange rate “reflects economic fundamentals and is generally at a reasonable equilibrium level.”

The PBOC imposed the foreign exchange risk reserve ratio on currency forwards in October 2015 in an effort to halt the Chinese currency’s depreciation after the central bank announced changes to the mechanism for calculating the yuan’s daily fixing rate two months earlier. A currency forward is an agreement to sell or buy a currency at a fixed exchange rate on a future date, usually to hedge against volatility.

Under the rule, financial institutions were required to deposit 20% of the amount of their previous month’s yuan forwards settlement in a special noninterest paying central bank account for one year. The move was seen as an effort to crack down on speculators betting on a decline in the yuan by increasing their financing costs.

After falling 6.5% against the dollar in 2016, the yuan, also known as the renminbi (RMB), has strengthened rapidly this year. The currency’s gains have been driven by a weak dollar, better-than-expected economic growth in China, the government’s continuing crackdown on capital outflows, and a new “counter-cyclical” factor introduced by the PBOC in May, which essentially gives it more discretionary power to influence the currency’s daily trading midpoint.

Tommy Xie, an economist with OCBC Bank in Singapore, said he believes that the suspension of the foreign exchange risk reserve ratio signals the PBOC’s drive to support the yuan has paused.

“The unwind of two macro prudential measures to support the RMB for the past two years over the weekend and weaker than expected RMB fixing for the past two trading days show that China may want to slow the pace of RMB appreciation,” he wrote in a report on Monday.