By Yang Qiaoling and Liu Xiao 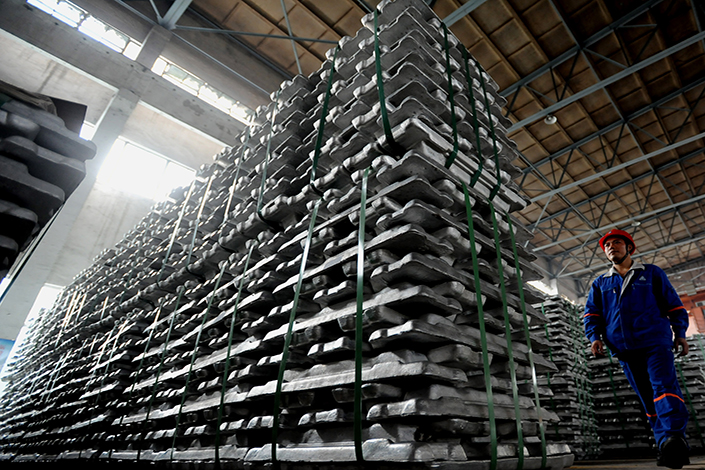 Chinese insurers are allocating more of their assets to riskier investments, as evidenced by China Pacific Insurance (Group) Co.'s deal with Aluminum Corp. of China Ltd. (Chalco) to create a $1.53 billion fund. Above, aluminum ingots are stacked at a plant of the parent company of Chalco, in Baise, the Guangxi Zhuang autonomous region, in June 2012. Photo: IC

China Pacific Insurance (Group) Co. is delving into aluminum projects, as the country’s third-largest insurer aims to drum up returns by investing outside safe-haven assets.

The insurer agreed to set up a 10 billion-yuan ($1.53 billion) fund with state-owned Aluminum Corp. of China Ltd., commonly known as Chalco, according to a statement by the metals producer issued Tuesday.

Chinese insurers are allocating more of their assets to riskier investments to chase better returns. As of the end of July, the entire insurance industry allocated 39.08% of its funds to alternative investments, up from 38.52% as of the end of June, data from the China Insurance Regulatory Commission (CIRC) show.

Those investments include investment in private equities, debts and stakes in infrastructure projects, real estate and trusts, as well as wealth management products issued by commercial banks. These assets are deemed riskier because they take longer to be turned into cash, and can have opaque structures and long maturities.

Safe-haven assets such as bank deposits and fixed-income instruments remain the biggest asset class in the insurers’ portfolios, but has shrunk to 48.12% by the end of July from nearly 80% in late 2012.

Pacific Asset Management Co., a subsidiary of Pacific Insurance, said it will raise money for the fund to invest in Chalco’s projects through perpetual bonds. Similar to stock dividends, perpetual bonds pay out fixed interest payments indefinitely as they have no maturity date.