Jingdezhen: Where Emperors Got Their Porcelain 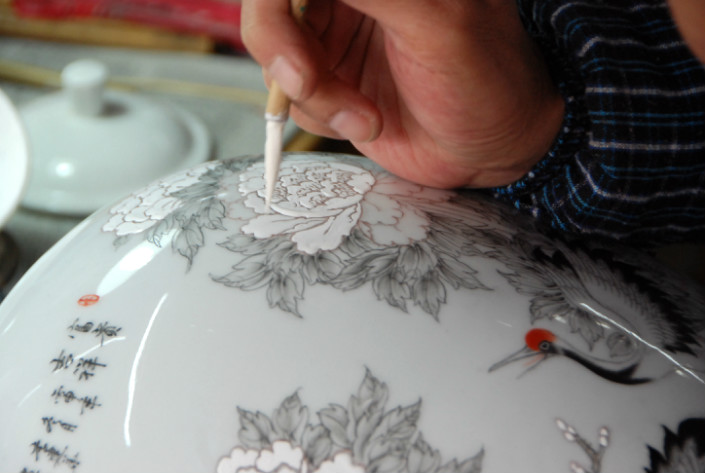 (Jingdezhen, Jiangxi province) — The clink of fine porcelain rings like a resonant bell to the ear; the colored paint shines as bright as a mirror, and the delicate ceramic clay is as thin as paper. This is what you’re told while you’re holding Jingdezhen porcelain in your hands for the first time.

Everything about the porcelain shops in this ancient city ooze refinement and elegance. A single traditional “chicken cup” — a basic cup with chickens painted around the circumference — from the Ming Dynasty can sell for more than 200 million yuan ($30.52 million). As you walk through the ancient kilns of Jingdezhen, fragments of chipped porcelain glitter in the dirt in various patterns and colors associated with different dynasties: the blue and white intricacies of the Song Dynasty and the famille rose hues of the Qing.

During the majestic years of bygone dynasties, the hidden kilns of Jingdezhen fired up Chinese porcelain for the emperor’s court. Over the course of centuries, the glistening porcelain has become an iconic reminder of the heights of imperial splendor: where fine craftsmanship meets high art, the balance of science and aesthetics that has long been a signature asset of Chinese civilization. Back then, the artisans would make hundreds of replicas for the emperor to choose one or two of his favorites. The rest were then destroyed. No one else deserved to have such exquisite ceramic objects.

Have you ever wondered where the term “fine china” came from? Mystery solved: these illustrious ceramics from Jingdezhen made it all the way to the royal castles of Europe, where they were named for their country of origin.

Today in Jingdezhen, a city in southeast China’s Jiangxi province, you can visit historic kilns, since turned into museums, where craftsmen have been trained in the ancient process of making porcelain. The Ceramic Folklore Museum is a standout example of a place where tradition is kept alive for visitors to learn and witness the craft. From harvesting the clay deep in the surrounding mountains, to kneading it and spinning it on self-propelled pottery wheels, to the precise art of hand painting — the step-by-step process of making porcelain shows visitors the difficult and delicate work that goes into creating bowls, tea cups and other wares fit for the emperor.

Jingdezhen is the ideal destination for anyone fascinated by the long-lost days of imperial splendor and interested in the art of porcelain. Located in northeastern Jiangxi, the city has reigned as the “porcelain capital” of China for close to two millennia. Surrounded by ample natural reserves of pure kaolin, the main ingredient of pottery clay, the city began producing ceramics as early as the Han Dynasty (221–206 BC). By the Song Dynasty (960-1279), Jingdezhen had become a hotbed of workshops and kilns catering to royals and the imperial court.

During the Song Dynasty, Emperor Zhenzong was particularly in love with the artfully crafted porcelain from this southern town. He commissioned the building of a major kiln site during the Jingde period of his rule, from 1004-1007 — hence the city’s name of Jingdezhen, which means the “town of Jingde.” Nowadays, your porcelain wares will bear the same inscription on the bottom to let you know they were authentically made in modern-day Jingdezhen.

But the influence of ceramics in this city isn’t just a relic of the past. Located in what was once an old, burnt-out factory complex, the Tao Xichuan Creative Park is one of the hippest ceramics-centered art districts in all of China, with rows of small stands where university students sell their creations alongside master craftsmen.

The ceramics students display a wide variety of irresistible curios: jade coffee mugs adorned with lotus flowers, whimsical statues of the Guanyin Buddha with oversized heads and avant-garde earrings that dangle from the display case. If you’re interested in buying a piece, a 20-something artist will take a brief break from playing games on her smartphone to talk with you about her art and package up the piece with the love that only an artist can show for her little masterpieces.

As you leave Jingdezhen, you’ll no doubt take a piece of this city with you, either in the form of actual porcelain or as a cherished memory of the first time you held the cool-to-the-touch object in your hands. As you say your parting words, your local guide will want to tell you of a saying they have in this part of China: “In heaven there are stars. There should be something on Earth to resemble them. That’s why we have porcelain.”

How to get there

There are regular flights from both Beijing and Shanghai to Jingdezhen, a third-tier city in Jiangxi Province. The flights take 2 1/2 hours from Beijing and one hour from Shanghai. Although no bullet train goes to Jingdezhen at present, there is a high-speed rail line from Shanghai in the works that stops in Jingdezhen. It is scheduled to open at the end of 2017.

The Kaiyuan Manju Hotel is a boutique hotel in Jingdezhen. Located in the heart of Tao Xichuan Creative Park, the Kaiyuan infuses all the traditional details of Jingdezhen porcelain with an avant-garde style that befits the setting. The staff speaks English. There are also several midrange and budget hotels in the area.

The ancient kilns and the Ceramic Folklore Museum are the must-sees of Jingdezhen, followed closely by Tao Xichuan Creative Park. Outside the bustling city, you can also take a brisk hike up mountains where the kaolin clay was harvested. Along the way, you can stop by the monuments highlighting the history of harvesting clay — such as the statue of a man with a long rattail braid climbing into a mine and the one of a man with a mandarin hat showing how they transported the clay on their backs down the mountain.

At the foot of the mountain you can saunter around a small town that was once a mighty shipping port for the clay, where now you’ll see friendly elderly women looking over the river as their daughters wash clothes in shallow water. Tucked in the alleys of this town, past the flock of roaming chickens, there’s a small museum where the tools used for clay harvesting have been preserved.

If all this porcelain-mania has inspired you, you can also try your hand at spinning and painting your own masterpieces in a local ceramics studio.

Caixin’s monthly travel column is in collaboration with WildChina, a luxury travel company specializing in immersive and authentic travel experiences. Established in 2000 by Mei Zhang, a local of Yunnan province and Harvard MBA, WildChina is one of China’s first private travel companies. Its innovative way of travel has been recognized through numerous awards including National Geographic Traveler — "Tours of a Lifetime” and Travel + Leisure — “Best Life Changing Trips.” Founder Mei Zhang’s expertise has also led her to win a number of personal awards and accolades, including Travel + Leisure’s “A-List of Top Travel Advisors” and Conde Nast Traveler’s “Top Travel.”
You've accessed an article available only to subscribers
Subscribe today for just $.99.
VIEW OPTIONS
Share this article
Open WeChat and scan the QR code
RELATED