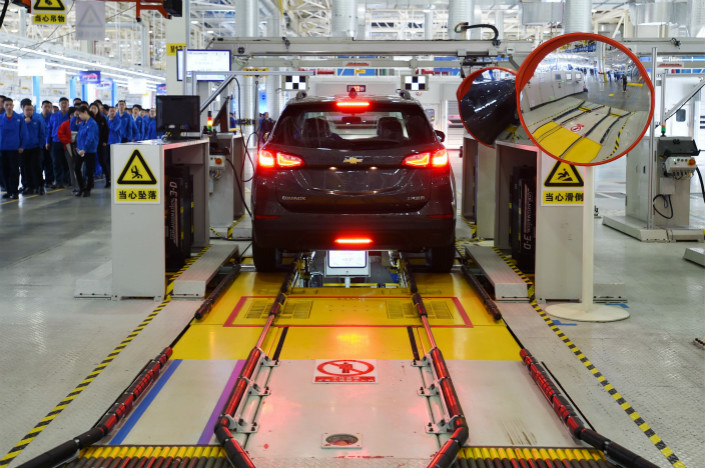 GM and its local joint venture partners sold 3.87 million vehicles in China last year, including those made at the company's Wuhan factory (above), but only a fraction of that total was electric. Photo: Visual China

General Motors Co. is getting ready for the day when every vehicle in China will be propelled by some sort of electric technology, in response to the government’s recent announcement that it will phrase out gasoline-powered vehicles.

By 2025, nearly all models from GM’s global brands in China — Buick, Cadillac and Chevrolet — will offer some kind of electric motor, either hybrid or fully electric, Chief Executive Officer Mary Barra said Friday at a company event in Shanghai.

To achieve that goal, the company plans to have at least 10 new-energy vehicles — a category including plug-in hybrids and battery-electric cars — ready to roll out between 2016 and 2020.

China this month joined the U.K. and France in saying it will eventually ban sales of gasoline- and diesel-powered cars. Though no specific start date has been announced for the ban as yet, the announcement has stirred up concern among foreign automakers in the world’s biggest auto market.

China is a key market for GM’s new-energy vehicles. The company and its China joint venture partners sold 3.87 million vehicles in the country in 2016, but only a fraction of those were electric.

China’s policy shift is pushing GM to invest heavily in electrification, Barra said. In addition to rolling out the new-energy models, the company also plans to partner with local companies, such as SAIC Motor Corp. Ltd., to push the timetable forward.

To support GM’s plans to grow its new-energy vehicle fleet for China, its SAIC-GM joint venture will open a new battery assembly plant in Shanghai this year.

Supported by a variety of government incentives, including subsidies, China has seen a rapid growth in the development of its new-energy auto market. However, instead of providing subsidies, which the government said will be rolled back by 2020, Beijing is preparing to launch a quota system to continue promoting new-energy vehicles.

That means the burden of selling new-energy cars will be borne by automakers, which must ensure that a certain ratio of their sales are for low- and no-emissions vehicles.

The plan, which was announced in 2016, sets quotas of 8%, 10% and 12%, respectively, for all carmakers in the three years starting from 2018. Those numbers are related to points awarded for each vehicle sale, and roughly correspond to the percentage of a company’s vehicle sales that must be electric or hybrid.

Automakers that fall short of the target could buy credits from competitors that have a surplus. But a source recently told Caixin that the start of the quota program could be pushed back to 2019, following complaints from automakers that they haven’t had have enough time to prepare.

Asked about the quota system, Barra said the company is exploring all channels to boost new-energy vehicle sales and will act according to the aforementioned timetable in China.