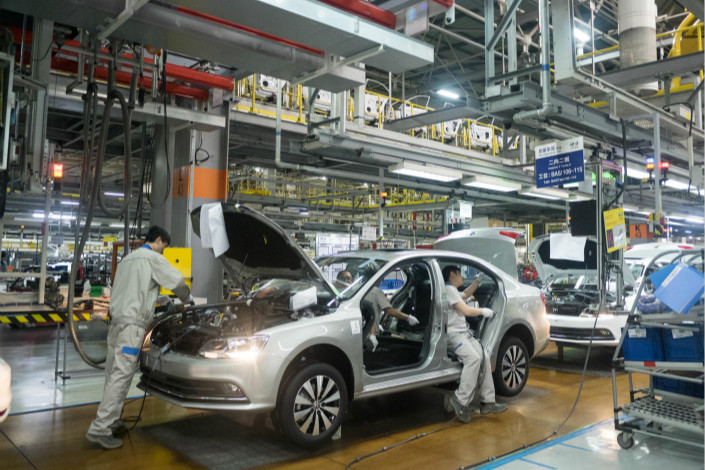 Workers work on a Volkswagen production line in the southwestern city of Chengdu on May 5. Photo: Visual China

German automobile giant Volkswagen will recall more than 1.8 million cars in China due to a defect in the fuel pump, China’s quality watchdog said.

The fuel-pump defect can cause a failure in the electrical system that could shut down the engine, the watchdog said. The recall will start from December, and owners can have their fuel pumps replaced for free.

The recall is the latest embarrassment for the German automobile giant in China.

In May, one of Volkswagen’s joint ventures in the country, FAW-Volkswagen Automobile Co. Ltd., said it would recall 577,590 Golf and Sagitar vehicles because of a headlight fuse defect.

A representative from the Volkswagen’s public relations department told Caixin that it had received up to 18,392 complaints, but no one had reported an injury due to the problem.

The public relations department declined to say how much the recall will cost, though it said the measure won’t affect the company’s financial performance in the second half of 2017.

Total vehicle sales, including those made by Volkswagen’s two joint ventures with SAIC Motor Corp. Ltd. and FAW Group Corp., stood at 1.83 million units in the first half year of 2017, a tiny decrease from last year.

Volkswagen was at the heart of a diesel-emissions cheating scandal last year. But the company continued to post good results, with earnings at 115.9 billion euros ($138 billion) for the first half year of 2017, up 7.3% from the same period last year.