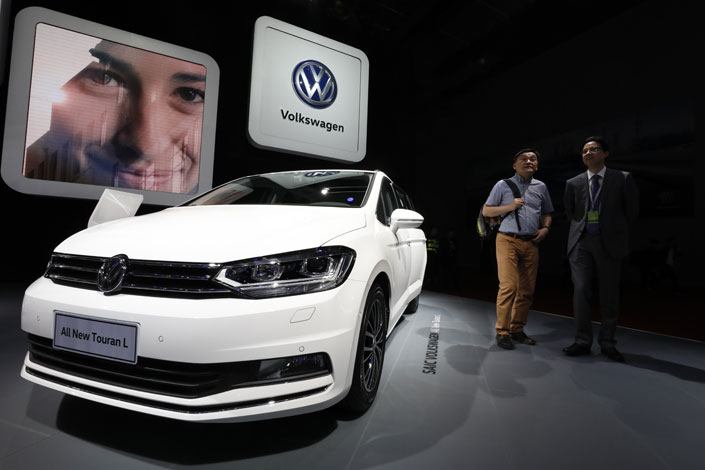 Visitors look at a Volkswagen display booth at the Auto Shanghai 2017 show at the National Exhibition and Convention Center in Shanghai, China, on April 19. Photo: IC

The 5 billion yuan ($730 million) project was greenlighted Monday by the National Development and Reform Commission, China’s economic planning body, according to a JAC statement.

Each side plans to cover half of the funding, the source said.

The new project will add to Volkswagen’s presence in China, where it already partners with two companies – FAW Group Corp. and SAIC Motor Corp. Ltd. This third tie-up would have been blocked in past years, as China forbids foreign carmakers from setting up more than two joint ventures that produce similar vehicles, according to a policy that took effect in 1994.

But as part of its promotion of new-energy vehicles – especially electric and hybrid cars – China rolled out a new guideline in 2015 declaring that the formation of EV partnerships doesn’t count toward the 1994 quota.

The next step for the new joint venture is receiving approval from the Ministry of Industry and Information Technology, as stipulated by the 2015 rule.

Making EVs is an important future direction for the German giant. Last June, it launched its “Strategy 2025,” aiming to reach annual sales of 1 million electric and hybrid vehicles globally by that year.

Volkswagen hopes to achieve breakthroughs in the speed of EVs through the new venture, said its China Chief Executive, Jochem Heizmann.

JAC has made progress in China’s EV market, with its iEV6S series the fifth most popular EV in April in terms of sales, according to the China Passenger Car Association.