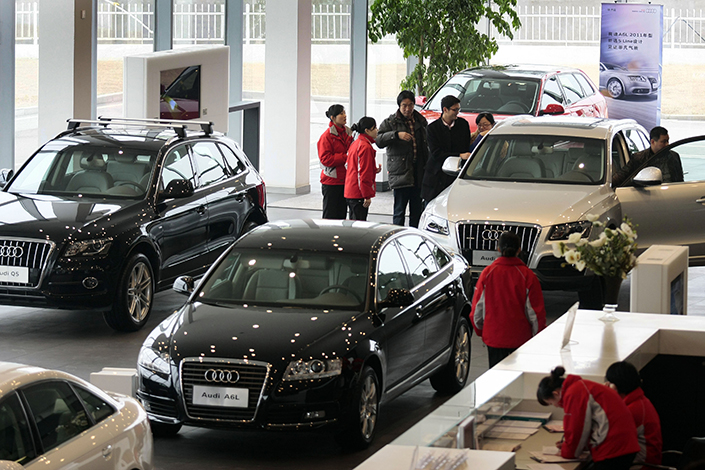 Audi dealers sell Audi sedans and SUVs at a dealership in Nanjing in 2011. Photo: Visual China

(Beijing) – German auto giant Audi AG has agreed to abandon plans for a separate dealer network originally envisioned under a new joint venture, removing a major obstacle that saw its China sales plunge amid backlash from its current dealers.

Audi will retain its current sales company, jointly set up with original China joint venture partner FAW Group Corp., as its exclusive dealer network, according to a new agreement reached between the German auto giant, FAW and their dealers during their latest negotiations on Friday.

That agreement reverses part of an earlier one that Audi secured with SAIC Motor Corp. Ltd., which became the German company’s newest joint venture partner last November when the pair signed a production and sales deal.

The new agreement would scrap part of last year’s deal allowing the SAIC venture to operate a separate dealer network. But SAIC could still form new dealerships within the current Audi-FAW network.

Announcement of the new SAIC joint venture last year angered Audi’s existing 460 dealers, who said they had been losing money for the past three years, a dealer told Caixin, speaking on condition of anonymity. The current network was capable of selling 1 million cars each year, the dealer said, even though Audi’s 2016 sales were well below that amount. Adding a new sales network would only make the situation worse, the dealers said.

The tussle sent Audi’s China sales into a tailspin, as dealers refused to fulfill their 2017 sales targets. As a result, Audi sales slumped 22.1% in the first quarter, as the longtime leader of China’s luxury car market lost its crown to German rivals Mercedes-Benz and BMW.

With the dealers’ biggest grievance now settled, the sales target should be finalized soon, the association of Audi dealers told Caixin.

As part of the new agreement, Audi also promised that cars produced by the future Audi-SAIC joint venture won’t enter the market until 2022, said Dietmar Voggenreiter, board member for Audi sales and marketing. SAIC, which didn’t participate in the talks, had no immediate response to Caixin’s request for comment.

Despite the new agreement, the Audi-SAIC venture could still face other obstacles before it starts production in five years.

The venture may have violated domestic regulations, since the State Council, China’s cabinet, last October said any such new ventures for cars powered by traditional fuels should not be approved in principle, a source close to FAW told Caixin. Audi’s plan to set up a production line with SAIC is still awaiting approval by the Chinese government.